These birds flock in mesmerizing swarms of thousands—but why is still a mystery.


It’s a mesmerizing sight: Thousands of birds move in unison through the evening sky, whirling and swooping as if performing a highly synchronized ballet.

When they finally descend to their treetop roost, the beating of their iridescent wings creates such a rush of sound that the noise earned the phenomenon its unusual name: a murmuration of starlings.

The term is unique to European, or common starlings, one of the world’s most abundant—and adaptable—birds. Native to the United Kingdom as well as Europe, starlings have become invasive species throughout the U.S., Australia, New Zealand, Fiji, South Africa, and many other countries where, over centuries, they were introduced either by accident or on purpose. In the late 1890s, a group of Shakespeare enthusiasts released about a hundred European starlings into New York City’s Central Park, hoping to populate the area with every bird mentioned in the playwright’s works.

Though starlings can be a nuisance and a threat to native birds, their murmurations are breathtaking spectacles that often draw crowds to watch. 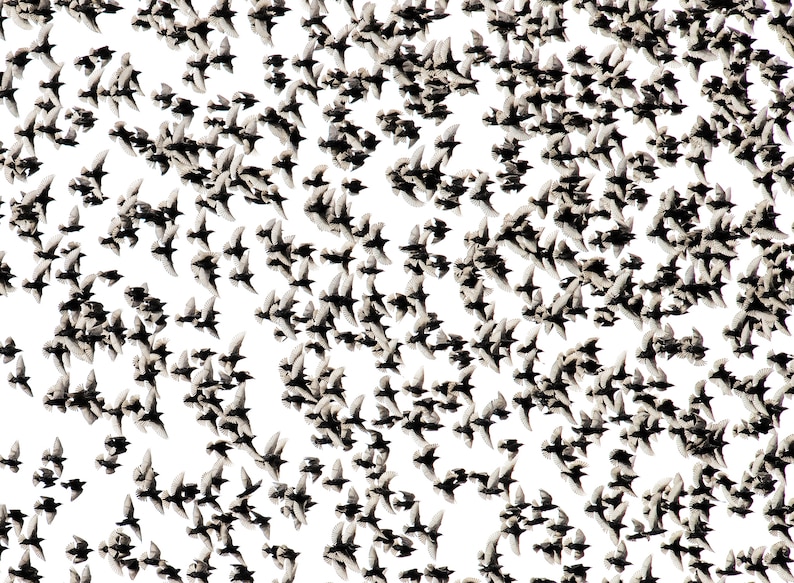 Left: In California, two falcons approach a murmuration, a relatively rare example of competition between the predators.
Right: Starlings can gather in flocks of tens of thousands. 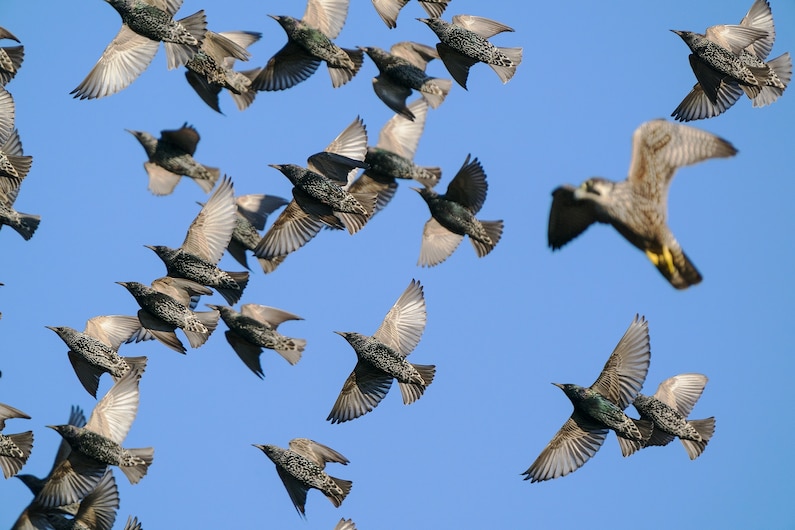 Starlings can coordinate movements by aligning themselves with seven birds flying nearby.


In the Northern Hemisphere, murmurations begin in fall and winter as the birds take rest stops of up to six weeks on their southern migrations. During this time, starlings may venture up to 60 miles a day from their roosting trees to feast on seeds, bugs, and larvae, then come back together to create murmurations that can last as long as 45 minutes. (Learn more about the epic journeys of migrating birds.)

Of course, birds moving in flocks is not a new behavior, and ornithologists have long studied it. But no other bird species flies together with the same coordination or complex patterns as European starlings, whose murmurations have been counted in numbers of up to 750,000 individuals.

What’s more, though starlings are such a ubiquitous bird, very little is known about why they murmurate.

“The bottom line is, I’ve been studying this thing for 50 years, and I still don’t know,” says ornithologist Frank Heppner, professor emeritus at the University of Rhode Island, who did some of the earliest studies of starling behavior in the 1960s.


Birds of a feather

University of Rome physicist Andrea Cavagna has spent the past 16 years studying how starlings synchronize their movements with such precision and grace. To do so, he has created sophisticated 3-D models of the starling flocks that swirl over Piazza dei Cinquecento in Rome, where the starling population has doubled over the past decade to about a million birds.

Together with his research partner Irene Giardina, Cavagna operates three synchronized, high-speed cameras on the roof of the Palazzo Massimo during the starlings’ winter migration.

“Every winter we have been up there in the cold and rain night after night,” says Cavagna. “It’s just us and the statues.” 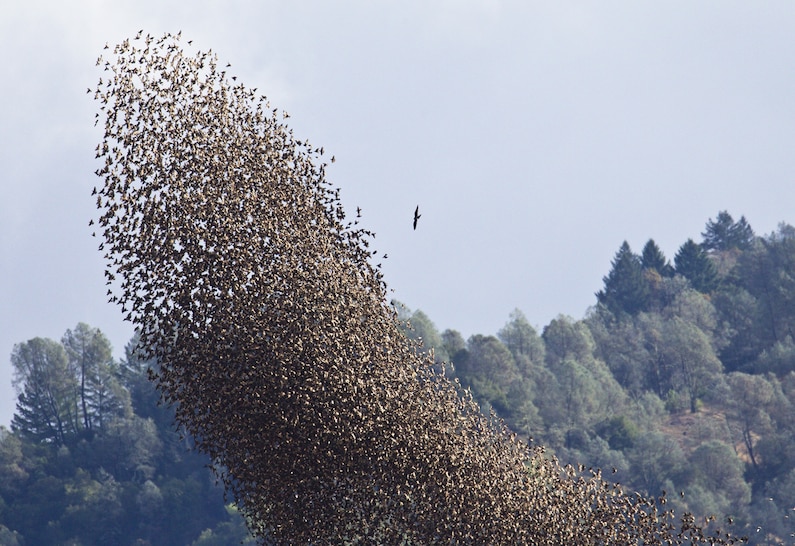 Startled by a peregrine falcon, a starling flock in California rises quickly into the air, compressing into a tight, intimidating shape. 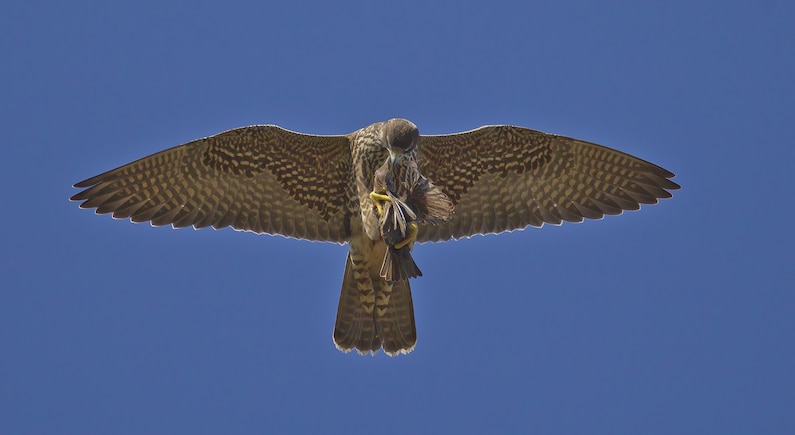 A peregrine falcon attacks a starling that was separated from the flock, an unusual event that usually leads to a successful capture.


Using the video footage they capture, Cavagna and his colleagues reconstruct the positioning and velocity of a flock’s individual birds into computer models.

Their recreations reveal that starlings maintain their fluid formations via a mechanism known as scale-free behavioral correlation, in which each bird positions itself next to approximately seven other birds, coordinating its movements to create an overlapping synchronicity. (Read more about animals that swarm.)

Cavagna suggests thinking of the phenomenon as like driving on a freeway: “You interact with a fixed number of cars, maybe the one in front, the one behind, and one or two on each side, but you’re not interacting with the cars 50 meters away so you’re not distracted by them.” (It helps, he notes, that European starlings have the advantage of lateral eyesight, giving them a field of vision that extends almost all the way around their bodies.)

Although each bird is interacting with its nearby neighbors, every bird’s movements affects and is affected by the entire group, allowing information to travel across the flock at a constant speed. The result is collective decision making so agile that a signal to turn, usually initiated by a bird on the outskirts, can flash through a flock of 400 birds in half a second—a speed of 90 miles per hour.

Perhaps most fascinating in appearance are the dark bands that radiate through a cloud of starlings like a moving stream, says Charlotte Hemelrijk, professor of evolutionary life sciences at the University of Groningen in the Netherlands. 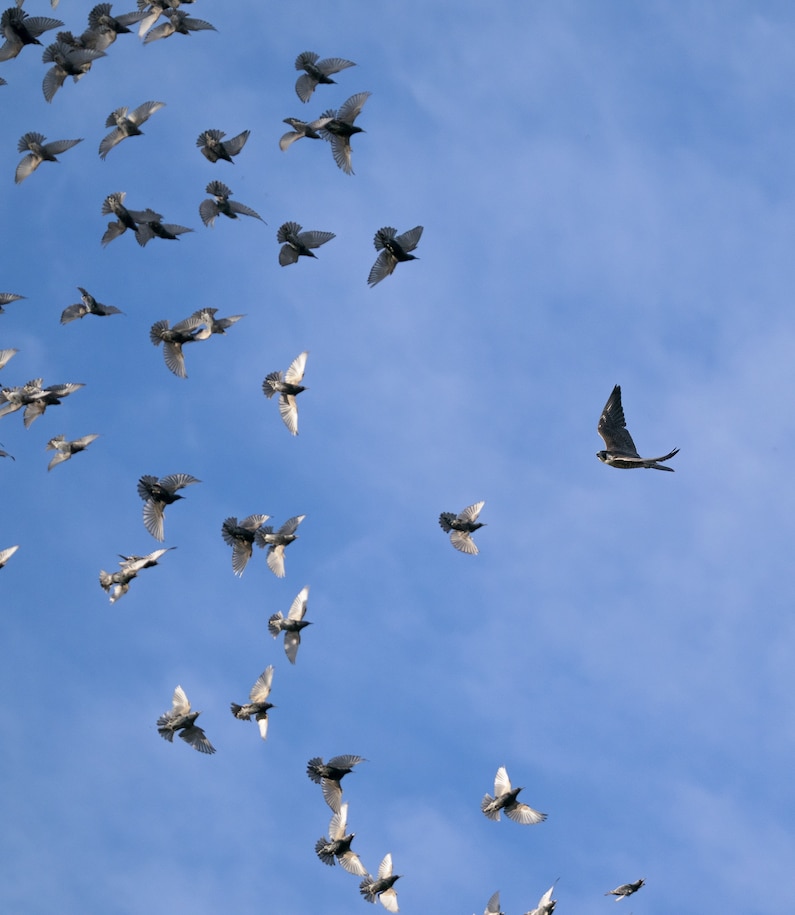 As a falcon approaches at high speed, the starlings turn in tight formation to avoid capture.


These “agitation waves” look from the ground as if the starlings are drawing together more densely. But actually they are visible when the birds bank upward, tilting to show a larger area of their wing to observers below. In other words, in addition to clocking the surrounding seven birds, they’re playing follow the leader. “Our latest models show that they are copying the behavior of the nearest bird, causing the motion to roll through the flock,” Hemelrijk says. (Read why birds matter, and are worth protecting.)

Hemelrijk has also found evidence that these patterns serve to confuse predators, such as hawks and other birds of prey, and make it more difficult for them to pick off stragglers. Using sophisticated computer modeling, Hemelrijk has documented patterns of collective escape specifically tied to the movements of a predatory hawk or falcon.

Why European starlings circle the sky in such gigantic flocks for so long is a much more perplexing question.

The most common explanation—sometimes known as the “safer together” hypothesis—is that the swarms are a protective response against predators. But Heppner and Cavagna say that defies logic; they point out that the birds could simply return directly to their roosts, rather than amassing into huge formations and spiraling across the sky.

“You would think they would want to minimize flying time, but instead they go through this spectacular display for half an hour to 45 minutes, burning up energy at a ferocious rate,” Heppner says.

“And meanwhile they’re actually attracting predators. it’s like they’re saying, We’re here, we’re here. You have to ask yourself, how did a mechanism like this evolve?”

Another possible explanation, sometimes called the “warmer together” theory, suggests that murmurations function to advertise a roosting site, attracting greater numbers of birds to the flock to conserve body heat.

In an attempt to solve the mystery, researchers from the University of Gloucester and the Royal Society of Biology compiled data from more than 3,000 murmurations, data that volunteers in 23 countries collected in 2014 and 2015. The results, published in 2017, showed no correlation between temperature and murmuration size, leaving little support for the warmth hypothesis.

The study also reported the presence of a hawk, falcon, or other bird of prey in just under a third of the murmurations, offering some support for the predation theory—yet leaving unexplained why the birds join together in such lengthy performances.

An act of pure beauty?

On one characteristic of the starlings, though, researchers are in agreement: the birds are remarkably intelligent. When Heppner kept starlings in captivity for his research, he says, “they were so good at picking the locks on their cages, we had to put padlocks on them.”

With the birds’ brain power in mind, is it possible that murmurations are simply their conscious expression of a sheer joy of movement? (Read more about animals that “dance.”)

“In the absence of a predator, I do think it’s possible to see these displays as a sort of dancing,” says the University of Groningen’s Hemelrijk.

“We don’t want to attribute too much intention, but they’re certainly very excited. They do this for a very long time sometimes,” she says, “when they could just go to sleep.” 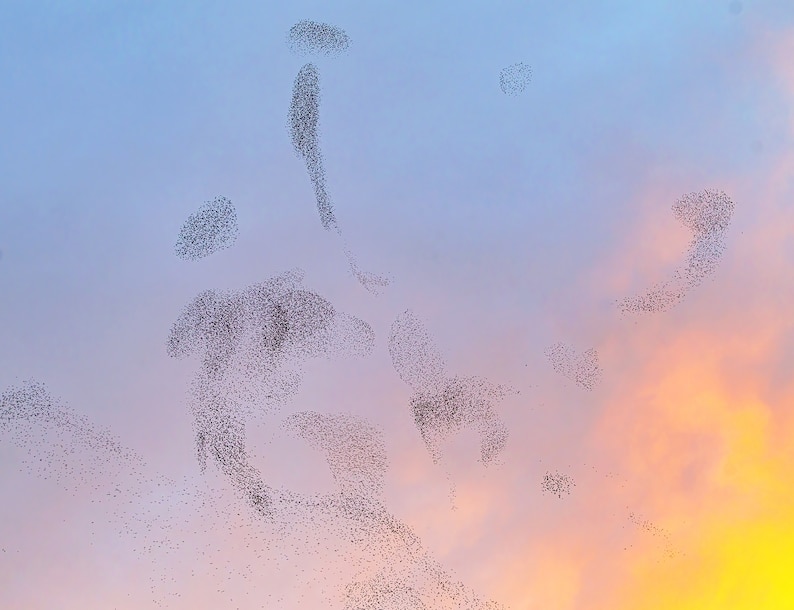 Starling flocks take to the sky near their nightly roost site.