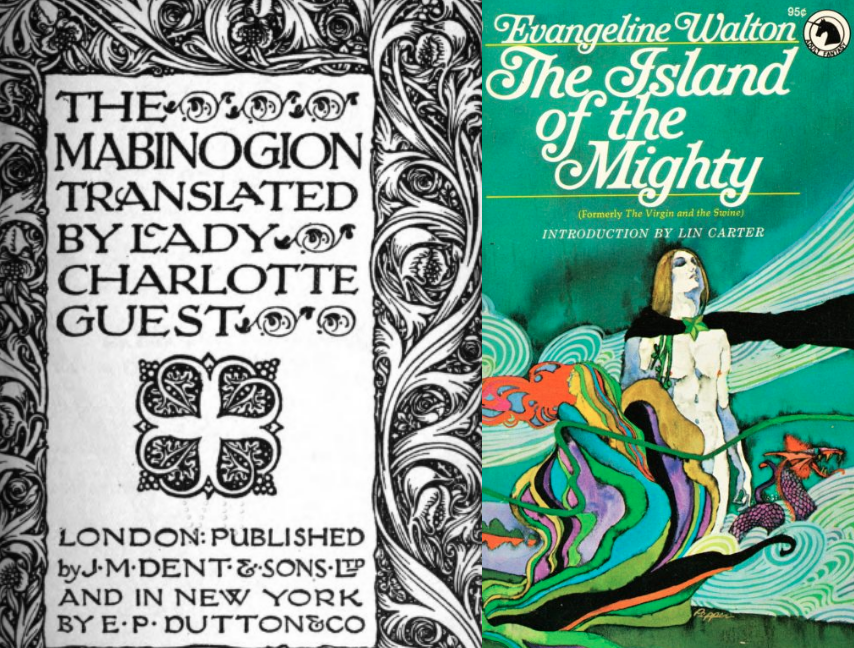 Many, many fantasy readers and writers begin their fascination with Medieval Wales with the Mabinogion.  Some of us become medievalists and at a particular in moment in our lives the world turns upside down.

The Mabinogion we know isn’t what we thought it was. While the earliest known versions of the Mabinogion date from around the thirteenth and fourteenth century. There are eleven tales altogether, but four branches of them are the heart and core. I’m not going to go into detail here (much as I’d like to) except to note that today I’m really talking about four branches of tales, not about the complete contents of both manuscripts.

Charlotte Guest’s translation/adaptation of the eleven tales gives us the vast majority of modern fiction that uses it. When I wrote a novel that used aspects of it, I didn’t only use Guest, but I knew Guest best.

Evangeline Walton’s four book branched version is one of the most influential versions of these stories in the English language. They are legend-base fantasy, and they rely heavily on Charlotte Guest’s understanding of the original.

Every time I open my volumes I am surprised by how old Walton’s stories are and how new. Every time. The one in front of me now is The Island of the Mighty, which is the volume I always take when I want to wave a book around and show the work to people. It’s the oldest novel in the sequence by a few years. Make that a few decades.

The Isle of the Mighty was first published in 1936, and the other branches of Walton’s Mabinogionwere published in the 1970s. It was the last three volumes, with that critical 1970s date that have ensured that Walton’s version of the four branches is the core of so many popular views of the legends of medieval Wales.

The political history and the personal histories and the place histories of Wales have different literary histories, so I’m not going to focus on them here. The version of medieval Welsh legend that we assume must reflect historical truths about Wales in the Middle Ages and earlier, followed the path from Charlotte Guest in the early to mid-nineteenth century, and through the interpretations by Evangeline Walton. One of the reasons Walton’s version has been so influential in Commonwealth countries and in the US is because she was a very fine writer – it’s easy to understand and to borrow the stories from her retelling.

Another reason for Walton being a critical point in this path is quite possibly timing. The 1970s was the decade of the popularisation of fantasy-based on myths and legends. It was when internationally, Tolkien’s work suddenly loomed as of major importance to the speculative fiction world, for instance. In other words, it was a moment when English language fiction focussed on the Medieval West as a heartland for fantasy tales. The path to the seventies took hundreds of years, but there was a moment when a cultural mindset consolidated. Walton had the right writing at the right time to be part of such a mindset.

The literary qualities of her work are interesting. I read Guest before I read Walton. I was a child at the time and read everything available, so the only reason for Guest coming first is because a relative had a copy. For me as a reader, then, there was a clear transition between Guest’s interpretation of the Mabigonion and Walton’s. The old copy of Guest I read had the imprimatur of an old book read at a respected relative’s house. Walton’s work was from the library and I chose it from other books that had similar covers. I can still read it today with the eyes trained by those covers. When I do this, I read the kind of drama one more often sees in sword and sorcery fantasy, and the shaking up of my pre-teen views of the world. Adjectives and larger than life characters and building a world that was magnificent but not quite real to me: this is what I discovered as a pre-teen and teen.

Alan Garner’s novel The Owl Service gave me a different view of the same stories, and it was this novel that leads back to Guest and to the strained relationship that Guest had with those works she interpreted for the world. Garner’s work and its relationship with the Middle Ages needs an article of its own, then.

What interests me now is that Walton gave us the legends of the Middle Ages in a form that we could instantly absorb, through suing the literary forms of popular fantasy. This is one of the key reasons she’s still so important in her influence on popular opinions of Medieval Wales. It’s less to do with how accurate she is, or even how original she is.

The critical element in her work is that it brought those legends to us, by writing them in a way we could understand. This does not mean that her Medieval Wales was accurate or inaccurate. What it means is that we could feel we understood Gwydion when he created magic with mushrooms and could follow Arianrhod’s life with pain and with emotion for what she did and the decisions she made. This is classic writing. It is the way many readers would like to read the stories from the Middle Ages. Not so much linked to life or to the work of historians, but linked to genre and to fine writing.

A portrait of Lady Charlotte Guest from 1852, from the Welsh Portrait Collection at the National Library of Wales

Walton’s tetralogy remains a powerful sequence of novels because of the clear genre choices, in part, and because her source material was full of strong narratives about which we knew a little. She took the words that were floating round about medieval legends and she turned them into verbal magic for a quite different age.

I’ve often suspected that when Walton’s books lose their capacity to demand readers’ attention, that this will be a good indication that the stories we want about the Middle Ages have changed.  Nearly fifty years after three novels were published and over eighty years since the first came out and her work still has a great deal of draw. There is a sector of our community that still feels the Middle Ages in this way.

Gillian Polack is an Australian writer and scholar who focuses on how historical fiction, fantasy and science fiction writers see and use history, especially the medieval period. Among her books is The Middle Ages Unlocked. Learn more about her Gillian’s work on her website, or follow her on Twitter @GillianPolack

Click here to read more from the Medieval Reads series