Is the Mediterranean Basin really a hotspot of environmental change?

Joël Guiot has received funding from the French government and the European Union for his research.

Wolfgang Cramer has received funding from the French government and the European Union for his research. 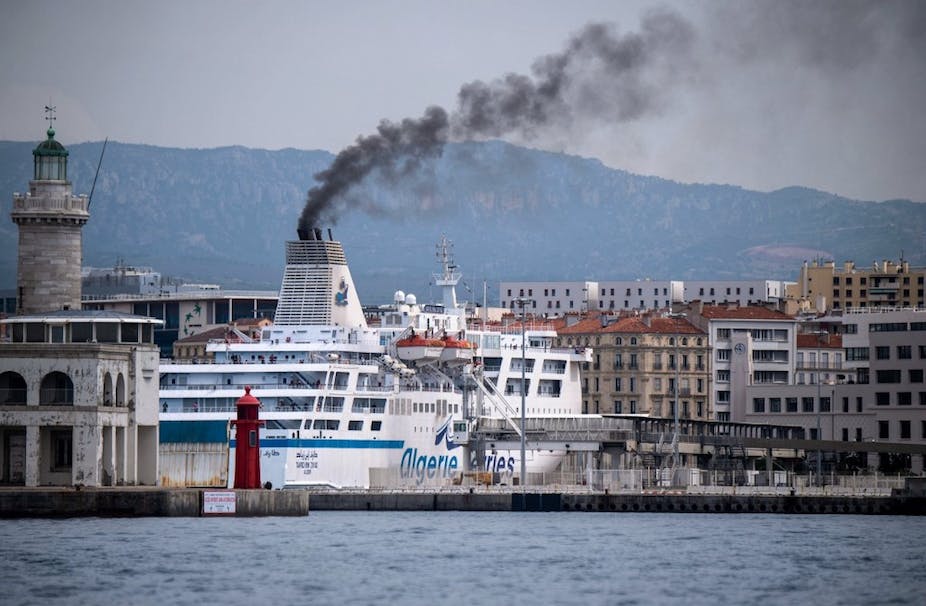 In August 2019 in the port of Marseille. The docking of cruise ships intensifies air pollution. Christophe Simon/AFP

The Mediterranean basin, which includes the Mediterranean Sea and the countries it borders, is often referred to as a hotspot for climate change and biodiversity. This image is used to illustrate the multiple risks for the region, its people and its ecosystems. A new analysis of the scientific literature co-authored by 120 scientists concludes that the sum of climate change, pollution, unsustainable use of land and sea, and the invasion of nonnative species has induced these overlapping risks that are often underestimated.

Concerning the existence of the hotspot, the answer is both yes and no. It is no if we mean that the Mediterranean region has warmed faster than other regions. It is true that increases in air temperature have now reached +1.5°C compared to the pre-industrial period (1850-1900) while the global average increase has just exceeded +1°C. However, this is not surprising since all of the world’s land surfaces have warmed more than the atmosphere above the oceans. The strongest warming occurs at high latitudes with a speed twice that of the global average. The Mediterranean, being semi-enclosed and relatively shallow, is warming faster than the global ocean (+0.3°C to +0.4°C per decade vs. approximately +0.2°C globally.

Temperature is only one among several factors in global change, however. The answer is yes if we consider the cocktail of multiple hazards (see the infographic below) that makes the Mediterranean particularly vulnerable, especially on its eastern and southern shores.

Warming rates are highest in summer, particularly for maximum temperatures, projected to reach +3.3°C for a global warming of +2°C. This will increase the intensity and frequency of heat waves. Cities will experience heat peaks that will be further amplified by several degrees by mineral surfaces, with particularly significant health risks for the most vulnerable city dwellers (children, the elderly and the poor). Their health risks are further amplified by air pollution, which is also exacerbated during hot episodes, for example, in large cities such as Cairo and Barcelona.

The increase in maritime traffic in ports such as Marseilles, to meet the growing demand for tourist cruises, has an even greater impact on health because it generates peaks of sulphur dioxide and nitrogen oxide when summer temperatures reach their maximum.

In the ocean, conditions are no better. Stronger and more frequent marine heat waves kill sensitive species. The effect of warming on living organisms is amplified by the acidification of seawater which, due to its higher alkalinity, absorbs more CO2 than the global ocean. In addition, tropical species arriving through the Suez Canal or the Strait of Gibraltar tend to replace some native species. Coastal areas are heavily impacted by sea-level rise, which is currently accelerating (4.8 cm over 10 years) and which could reach 40 cm to 120 cm in 2100, depending on the greenhouse gas emission scenario.

Successions of droughts and floods

The retreat of the coastline has been amplified by a drastic decrease in sedimentary input and by urbanisation. While sea level rise is less of a problem in less populated or high tide areas elsewhere in the world, it poses a huge problem to the densely populated Mediterranean where people, agrosystems, cultural heritage sites and coastal infrastructure are all dangerously near a low tide coastline. The “Acqua Alta” in Venice in November 2019 with 190 cm of peak tide foreshadows what will happen increasingly more often on the Mediterranean rim during marine submersions. 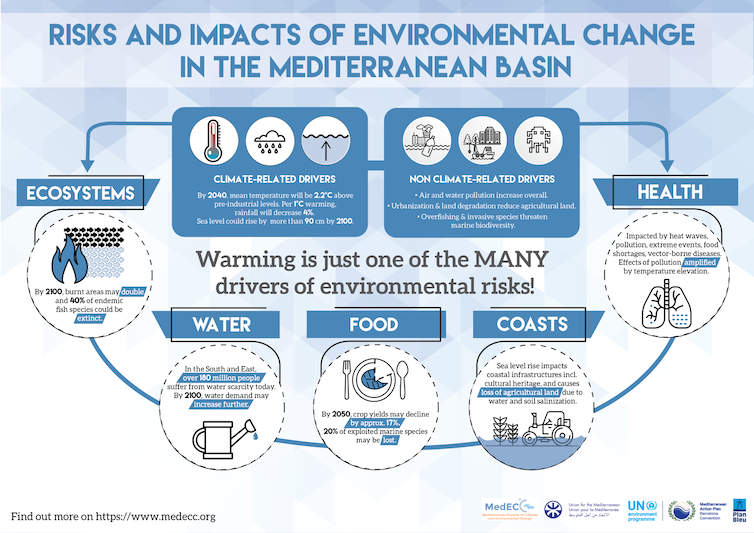 Summary of the conclusions of the first report on the environment and climate change produced by the MedECC network, released in November 2020 and which alerts policy makers and the public. Author provided, CC BY

Precipitation is undergoing a paradoxical evolution with an accentuation of drought during the summer months and an increase in heavy rains and thus the risk of flooding in the winter months. An average decrease of 4% in the amount of rain per degree of global warming has been estimated by climate models, affecting up to 180 million people, for whom the lack of water will become more pronounced.

In addition, water demand could increase by 22% to 74% by 2100 due to demographic changes, mass tourism and irrigation for agriculture. This shortage will be most significant in the southern and eastern Mediterranean where the climate is already arid and where three-quarters of the basin’s population live.

The Mediterranean territory is also a biodiversity hotspot with 25,000 plant species, 60% of which are endemic. It provided a “service” to plant and animal species as refuges during the last ice age (when the climate was much colder and the sea level was 120 meters lower). These ecosystems are now under the triple threat of drought, rising sea levels and intensified land use. Forest fires due to heat waves and droughts will be increasingly dramatic despite prevention efforts and fire response forces. Climate change, pollution and overfishing are having a heavy impact on marine ecosystems, which contain 18% of known species and cover 0.82% of the global ocean.

The Mediterranean is also currently a hotspot of social and political instability, experiencing economic losses, conflicts and significant suffering of populations; even if the causal links with climate change cannot be demonstrated, expected future changes are so great that the risk of increased instability is significant and will require major adaptation efforts. In economic terms, the region depends heavily on tourism (30% of world tourism) which faces the dual threat of heat waves and environmental degradation on the one hand, and the necessary decarbonisation of transport on the other.

The peak in water consumption by tourists coincides with that of agriculture, which will increasingly require irrigation, exacerbating use conflicts. The current Covid-19 crisis accentuates these developments and, in the short term, makes a paradigm shift inevitable regarding economic development based on perpetual growth, abundant (mostly fossil) energy and waste. Climate change is also an opportunity for a transition to lifestyles that are more respectful of nature.

Kasia Marini, scientific officer for MedECC in Plan bleu (Regional Activity Centre of Mediterranean Action Plan), contributed to the writing of this article.