History and culture of Central American nations on stamps pt 2 – Me...

Mexico is without a doubt the largest country in Central America, and to my own disbelief, I have to confess that I knew very little about the history of it. The only thing I remember from school history lessons was watching Viva Zapata! with Marlon Brando

Anyway, as usual, there’s a whole lot more to learn.

Before independent Mexico was born, there was the ViceRoayalty of New Spain. This was about the size of modern US, and in fact it consisted of many areas (such as Florida, Texas) that are currently US states.

But things started to change in 1810 when Spanish crown was under the occupation of Napoleon’s army in Europe and there was turbulance in the Northern parts of America too. A criello priest named Miguel Hidalgo saw a chance to start a rebellion against Spanish regime, and in small town of Dolores he declared Mexico’s independence from Spain on September 16, 1810. This act started a long, 11 year civil war; both Mexico and Central Americas declared their independence from Spanish Crown in 1821. Hidalgo was captured and executed in mid of 1811, but his figure has remained one of the key figures of Mexican stamps through all ages:

The following decades in Mexico were far from being status quo. Emperors and regimes changed in pretty rapid state, and there was more or less constant argument with the US (including but not limited to annexation of Texas to US and Mexican–American War). Things started to calm down only during the dictatorship the Porfirio Díaz (1876–1911). He ruled with iron fist, but as a result both the economy and society developed rapidly. However, another, much more famous rebellion was on the way.

The first wave of famous Mexication revolution raged from 1910/20, and the ’sequel’ (so called Cristero war) in late 1920s. The rebellion started with simple things: peasantry demanded land, water, and a more sympathetic national government. There was also a lot of bad blood against conservative forces represented by the Church, the rich landowners, and the foreign capitalist. As a result, very violent civil war broke out in 1911. The revolutionary forces were led by, among others, Emiliano Zapata and Pancho Villa (again, both assassinated during the rebellion). The constitution of 1917 was a windbreaker, as it was the first document in the world to set out equal social rights to all. However, it was also strongly anticlerical and seriously restricted religious freedoms of priests and alike. This led to the Cristero War in late 1920s. Philatelically speaking these years are very fascinating, as there’s tons of overprints etc. to dig into.

Some Mexican stamps issued during the Mexican revolution.

After the Revolution, Mexican society calmed down a lot, and started it’s growth as one of the most stablest and richest nations in Latin America. Philatelically speaking these later years are nowhere as boring as you might think.

First, there is Fransisco Eppens, the master of Art Deco stamps. He designed lots of breathtaking stamps for Mexico. As I’ve covered Eppens on earlier blog entry, I’ll not go any deeper with this trail.

Another thing worthy of highlighting are the Mexican definitive series – especially the 1950/1975 ‘National heritage’, and the 1975/92 ‘Exporta’ series. They are among the most complex and most collected in modern philately worldwide. Both are made of tens of designs, and even on simplified level they have hundreds of varieties (watermarks, perforations, different values etc) to keep collector busy.

1952/75 Mexico. Four low-values from the National Heritage definitive series. These stamp come in number of different watermarks, perforations and face values. Michel credits this series with 89 major numbers, and lists over 200 varieties.

And finally, Mexico is one of the few modern countries to experience hyperinflation (more widely known examples of hyperinflation are 1920s Germany and 1940s Hungary). The Mexican hyperinflation had it’s roots on the late 1970s oil crisis, and it all peaked on 1993 when Mexico created a new currency, the Nuevo Peso (”new peso”), which chopped 3 zeros off the old peso. 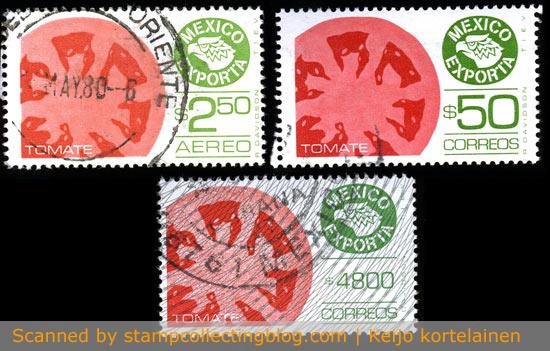