By Jeanna Bryner a day ago Planet Earth

The Northwestern Bahamas has never in modern history seen such a beast of a storm. 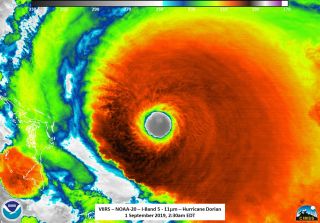 At that time, the eye of the Category 5 storm was churning about 20 miles (30 kilometers) east-northeast of Great Abaco Island and 205 miles (330 km) east of West Palm Beach, Florida. The storm is moving toward the west at about 7 mph (11 km/h). That slow speed means Dorian will have plenty of time to dump huge amounts of rain along its path.

The NHC forecasts the core of Dorian will continue to move over Great Abaco and then near or over Grand Bahama Island later tonight and Monday (Sept. 2). Late Monday through Tuesday night, the extremely dangerous storm is expected to move closer to the east coast of Florida.

Related: Hurricane Season 2019: How Long It Lasts and What to Expect

"Catastrophic hurricane conditions are occurring in the Abacos Islands and will spread across Grand Bahama Island later today and tonight," the NHC said in the 11 a.m. update.

Where (and if) Dorian will make landfall in the U.S. seems to be an open question, with forecasts showing various possibilities from Florida north to the Carolinas, according to a CNN report.

If Dorian does make landfall as a Category 5 storm, that would make the storm a rare one. In 2017, two storms did so — Maria, which slammed into Dominica; and Irma, which hit Cuba, Barbuda, Saint Martin and the British Virgin Islands as a Category 5.

The last storm to hit the United States at Category 5 strength was Hurricane Michael, which hit near Mexico Beach and Tyndall Air Force Base, Florida, on Oct. 10, 2018. That was the first hurricane of that strength to make U.S. landfall since 1992, when Hurricane Andrew hit land near Homestead, Florida. The only other storms known to have made U.S. landfall at that strength are Hurricane Camille in 1969 and the so-called Labor Day Hurricane in 1935.