By Mindy Weisberger - Senior Writer a day ago 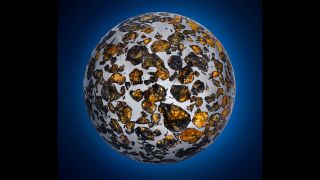 Dozens of ancient meteorites — some stony, some iron, some studded with glittering extraterrestrial gems or holding stardust that's billions of years old — are now up for auction at Christie's.

Many of these rare space rocks were once part of the moon, while others came from Mars or broke off of asteroids orbiting in the belt between Mars and Jupiter. These meteorites from landing sites across Earth are part of the auction "Deep Impact: Martian, Lunar and Other Rare Meteorites," held online from Feb. 5 to Feb. 23.


Some of these rare objects have starting bids of just a few hundred dollars, such as the unusual bubble-filled slice of Ibitira, a stony meteorite that fell on June 30, 1957, near the town of Ibitra in Brazil. But a trapezoidal slab of a lunar meteorite discovered in the Sahara Desert in Mali, measuring about 16 inches (40 centimeters) long and weighing approximately 4 pounds (2 kilograms), could fetch as much as $350,000, according to Christie's.

Prior to the auction, all the meteorites were examined by scientists with The Meteoritical Society, an international nonprofit dedicated to education and research in planetary science, particularly the study of meteorites.

Meteorites are survivors; they're all that's left behind after a space rock enters Earth's atmosphere as a meteor, sometimes flaring brightly in the sky before breaking up and dropping on the ground or in the ocean. More than 99% of meteorites come from asteroids in our solar system, while the rest are from Mars or the moon; they can be iron, rocky or a combination of stone and metal, according to NASA.

When experts evaluate diamonds, they use a system known as the four C's: carat, color, clarity and cut. For estimating the value of a meteorite, James Hyslop, head of the Science and Natural History department at Christie's, considers the four S's: size, shape, story and science, Hyslop told Live Science in an email.


A piece of the Gibeon meteorite, which originated as the iron core of an asteroid that formed 4.5 billion years ago. (Image credit: Copyright Christie's)

Larger meteorites are therefore generally considered to be more valuable than small ones, and a meteorite that was naturally sculpted into an aesthetically pleasing shape could also command a high price tag, Hyslop explained. Where a meteorite landed can also affect its value, as can its cosmic origins — moon, Mars or asteroid, he added.

"In the last few decades scientists have determined that a very rare group of meteorites originated on the surface of the moon — these are always amongst the most popular with collectors," Hyslop said.

Packed inside every meteorite are important clues about the materials and processes that birthed our solar system. But these visitors from space can also be astonishingly beautiful to look at. Some pieces of the iron meteorite Sikhote, which fell to Earth in Siberia's Sikhote-Alin Mountains on Feb. 12, 1947, broke off in the upper atmosphere during the meteor's descent, "and were sculpted by the forces of frictional heating during their plunge to Earth," giving their metal bodies a "gently scalloped" appearance, according to the auction listing.


The spherical Muonionalusta meteorite and the dazzling Fukang meteorite are two of the objects in the online auction. (Image credit: Christie's Images Ltd. 2021)

– Photos: The world's 6 most famous rocks

– The 7 strangest asteroids: Weird space rocks in our solar system

Pallasite meteorites are even more stunning; they come from stony-iron parent bodies where the rocky mantle meets the metal core, producing sparkling space gems. For example, an Imilac specimen from Chile's Atacama Desert, which is up for auction, is chock-full of glowing amber olivine and peridot crystals, set in a metallic matrix. Another pallasite meteorite, ground and polished into a sphere, resembles an "extraterrestrial crystal ball," the listing reads.

One specimen from the Sahara Desert isn't shiny, but its shape is nonetheless astonishing and unique. Most meteorites tumble through the atmosphere, but this stone plunged to Earth with minimal spinning and somersaulting, thanks to its angle of entry and the meteor's mass, the auction listing says. The meteorite was therefore scarred and reshaped by the pressures and friction of its trajectory — the angle of its fiery journey is literally etched into its surface.


Unlike 99% of all meteorites, this specimen experienced a minimal amount of tumbling during its plunge through our atmosphere.  (Image credit: Copyright Christie's)

"Rarely do the objects that survive this fiery descent look like that shared ideal seen in this meteorite," Hyslop said in a statement. "It is a wonder to behold."

Online bidding for the auction "Deep Impact: Lunar, Martian and Other Rare Meteorites" ends on Feb. 23 at 10 a.m. ET.