Buried by Vesuvius, this ancient villa is an overlooked alternative to Pompeii

With the Roman empire’s best-preserved frescoes, Oplontis offers a glimpse into the lives of the era’s rich and famous.

When you get off the Circumvesuviana train one stop before Pompeii, at the city of Torre Annunziata, you will not be impressed. The map says you’re in a UNESCO World Heritage site in southern Italy, bundled with nearby Pompeii and Herculaneum, all buried in the A.D. 79 eruption of the Vesuvius volcano. Only a small sign points to “Scavi di Oplonti,” directing visitors past dull concrete buildings to a small ticket booth overlooking a pit of rectangular roofs.

But descend a metal stairway and walk through a colonnade—and suddenly you’re in a massive atrium, or entrance hall, of what was once a grand seaside villa. Frescoes of vibrant gold, cinnabar red, and Egyptian blue adorn the walls, with painted columns and decorations that create a dazzling three-dimensional effect. As you zigzag deeper, artists from thousands of years ago enchant with images of peacocks, sphinxes, a rosy cake on a pedestal, Greek temples, and a masterful still life of pomegranates in a glass bowl.

UNESCO’s proclamation states that the Oplontis villa has “the best-preserved wall paintings of the Roman period”—and yet you practically have the place to yourself. Only four minutes away by train are the ruins of Pompeii, one of the world’s most famous archaeological sites, where, pre-pandemic, 14,000 visitors a day traipsed around during high season. 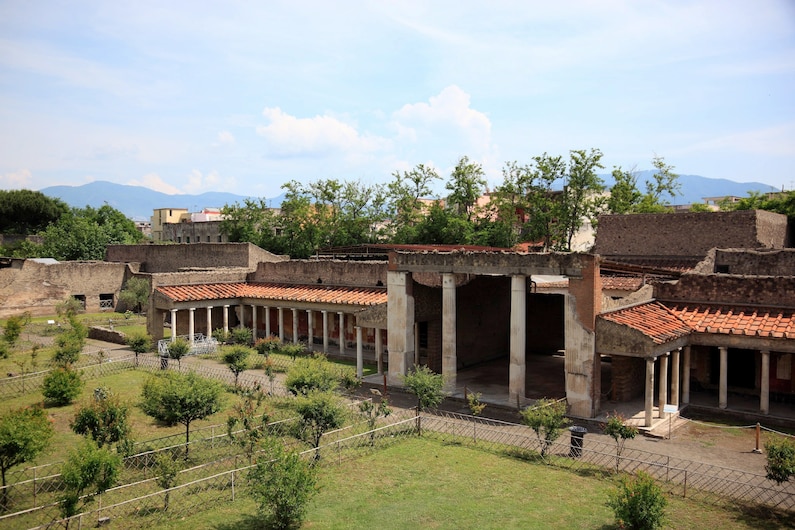 Villa A was part of a string of vacation retreats built along the coast of Naples—and buried along with neighboring Pompeii during the A.D. 79 eruption of Vesuvius.
BILDAGENTUR-ONLINE/UNIVERSAL IMAGES GROUP/GETTY IMAGES


Here in Oplontis, you’re rewarded with one of the most divine feelings travel can deliver—the flutter of discovering a hidden treasure.

The villa was certainly not hidden when it was built, around 50 B.C. Back then, before the Italian coastline was transformed by the massive lava flow from Mount Vesuvius’s eruption, it sat like a shining jewel on a high bluff, overlooking a beach and the Bay of Naples. Oplontis was part of a luxurious string of vacation properties built by wealthy Romans, which included the San Marco and Ariana villas, in Castellammare di Stabia, and Villa of the Papyri, in Herculaneum.

Cool ocean breezes, gentle hills, and fertile farmlands inspired this location’s name, Campania Felix (Happy Land). This was the ideal spot to indulge in otium—Latin for a style of leisure that combined rest, study, contemplation, exercise, and, of course, feasting and entertainment.

Here, Romans—who knew each other from their serious work in the city—could cut loose and also be seen with other high-status folks, creating an atmosphere somewhat like today’s Hamptons. 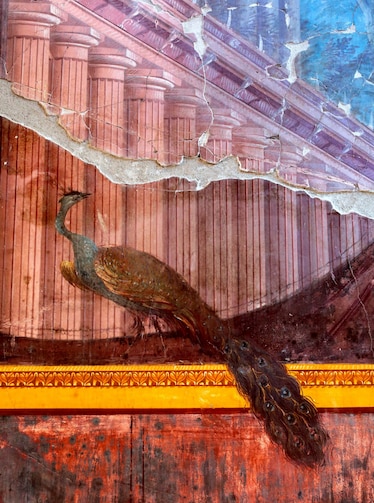 A detail of a vibrant peacock illustrates the luxuries that once greeted guests at Villa A.
PHOTOGRAPH IVAN VDOVIN, JON ARNOLD IMAGES/ALAMY


Party guests invited to Oplontis would arrive at the villa’s private port, then be escorted up ramps to be awestruck by the sheer expanse of the place—which would have been twice the size of the 99 currently excavated rooms, backed by vineyards and olive groves that sloped up to Mount Vesuvius. Once inside, an orchestrated interplay would ensue between guests and enslaved people, who would appear out of hidden alcoves to offer massages with precious ointments and perform acrobatic feats.

“I love how the wall paintings were designed to move people around the villa,” says art historian Regina Gee, of the University of Montana. “Frescoes of birds and lush plants bordering the pool inspired thoughtful strolling, while the interior zebra-striped hallways directed fast movement, useful for workers.”

(In ancient Rome, citizenship was the path to power.)

Some believe the villa was owned by the intriguing Empress Poppaea Sabina, Nero’s second wife. It was her name that was found inscribed on an amphora during an excavation, prompting archaeologists to call the site Villa Poppaea. With not enough evidence to prove her ownership, subsequent scholars settled on calling the site Villa A. Still, Torre Annunziata locals stick to Villa Poppaea, proud that an empress may have once lived among them. Unlike Pompeii and Herculaneum, which were excavated in the 18th century, Oplontis remained buried until the 1960s, helping to shield its vibrant frescoes from damaging exposure to the elements.
BILDAGENTUR-ONLINE/UNIVERSAL IMAGES GROUP/GETTY IMAGES


Poppaea does fit the profile of crazy rich ancient Romans who owned such villas. She was said to be highly ambitious and sexually adventurous, or as the historian Tacitus put it, “endowed with all gifts but that of integrity of the soul.” Her beauty was highly praised, and so precious to her, that, according to Pliny, she demanded to be bathed daily in the milk of 500 asses. Emperor Nero was Poppaea’s third husband, and to snare him, she went to great conniving lengths—convincing Nero to murder his mother, then divorce and execute his first wife.

(Nero’s mother, Agrippina, paid the price for being a master strategist.)

After finally marrying, things did not go well for Poppaea. While she was pregnant with their second child, the emperor flew into a jealous rage, accusing her of flirting with gladiators, and kicking her to death. Her legacy endured, as Nero felt guilty for his violent fit, and ordered an elaborate funeral, elevating Poppaea to divine status. To add to his display of devotion, he even had a slave who resembled Poppaea castrated so he could marry him. 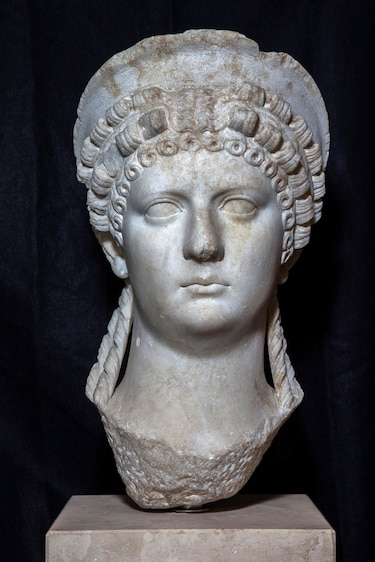 
Once you understand the dramatic characters who may have run the villa, you can picture banquets that would begin in the afternoon and carry on until the wee torchlit hours of the morning. Men in togas stretched out on couches, welcomed by servants who trimmed their toenails and offered them snow-chilled water from Mount Vesuvius for hand washing. Honeyed wine was poured into silver goblets; cymbals crashed as trays of delicacies such as dormice, oysters, and flamingo tongues appeared. Scantily dressed performers jumped through burning hoops, gyrated on tabletops, or dressed as Bacchus with laurel crowns, reciting Greek poetry.

End of the party

Festivities abruptly stopped when an A.D. 62 earthquake badly damaged Villa A. By the time of the Vesuvius eruption, pleasures there had been abandoned for 17 years. Unlike Herculaneum and Pompeii, which were excavated in the 18th century, Oplontis remained deeply buried, forgotten except for a few curious pokes during the Renaissance and in the 1700s when the bigger sites were explored.

It was not until 1964, when the Italian government thought uncovering Oplontis could be a good way to bring tourism to Torre Annunziata, that formal digging began. That late timing is one of the keys to the villa’s beauty; the vibrant frescoes escaped exposure to the elements that affected those older excavated sites. In addition, since its low-key public opening in the 1980s, Villa A hasn’t been harmed by waves of tourists.

Scholars, however, have become increasingly attracted to the site, thanks to the Oplontis Project, an American organization that has been studying and archiving the ruins since 2005. In addition to the villa, they’ve shed light on the history of Oplontis as a once thriving town, with thermal baths and a commercial complex that they call Villa B, where about 1,500 amphorae were found.

One of the most poignant discoveries in Villa B was a group of 54 skeletons of people believed to have been waiting for a ship to rescue them on that fateful day in A.D. 79. “The skeletons were found in two groups,” John Clarke, co-director of the Oplontis Project at the University of Texas at Austin, has said. “The first [group], near the entrance, were loaded with money and jewelry. The second, in the back, had no money, but lanterns and tools. It’s believed the second group were slaves, segregated, so sadly, from their masters, even in death.” 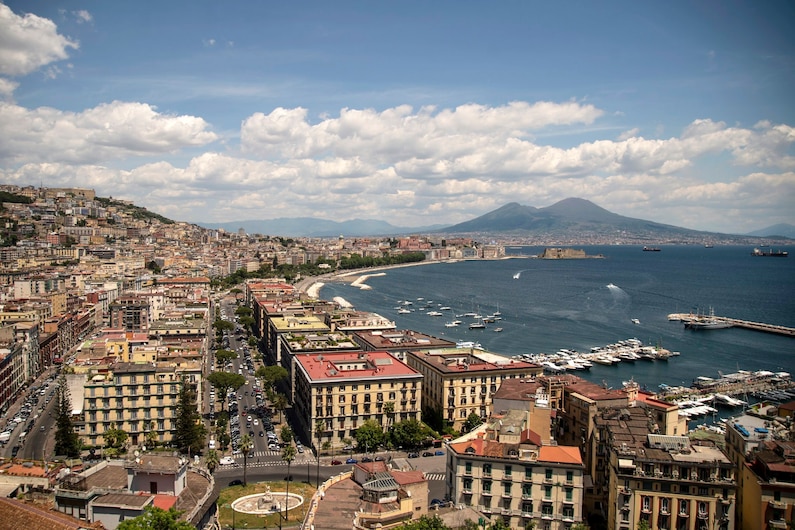 Still an active volcano, Mt. Vesuvius looms in the background in this aerial view of Naples. Its A.D. 79 eruption destroyed Pompeii and nearby Oplontis.


The Oplontis Project scholars collaborated with townspeople a few years ago to set up an exhibition of sculptures and artifacts found in the excavation storerooms. Locals were amazed to see treasures that they never knew existed—from exquisite marble statues of centaurs to glass vases and silver tableware.

(These are some of the most stunning archaeological sites in the world.)

There are hopes to have a permanent Oplontis exhibition space in Torre Annunziata and funds to support such things as publicity, restorations, and further excavations. Looking at the skyrocketing tourism that resulted when private donors and governments gave millions to Pompeii and Herculaneum, it’s clear that such possibilities abound for Oplontis.

Meanwhile, scholars, locals, and curious travelers will have these riches to themselves. “I never get requests from tourists to go to Oplontis,” says Fiorella Squillante, a Neapolitan guide for the Vesuvius vs Pompeii company. “But sometimes if I get a sense that they want to go deeper, I take them. I always love to watch them experience the contrast—from arriving in the modern town to entering the villa of the past. For me, their surprise, mixed in with the frescoes, is miraculous beauty.”

The coronavirus pandemic has challenged communities and disrupted travel. Be sure to research your destination and take safety precautions before, during, and after your journey. For National Geographic reporting on the pandemic, click here.

Susan Van Allen is the author of four books about Italian travel, including 100 Places in Italy Every Woman Should Go. She also designs and hosts Golden Weeks in Italy: For Women Only tours. Follow her on Facebook, Instagram, and Twitter.