Biography of the Day: Carl Stamitz 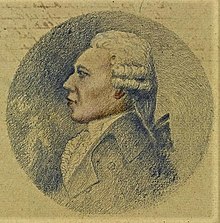 He was the eldest son of Johann Stamitz, a violinist and composer of the early classical period. Born in Mannheim, he received lessons from his father and Christian Cannabich, his father's successor as leader of the Mannheim orchestra. As a youth, Stamitz was employed as a violinist in the court orchestra at Mannheim. In 1770, he began travelling as a virtuoso, accepting short-term engagements, but never managing to gain a permanent position. He visited a number of European cities, living for a time in Strasbourg and London. In 1794, he gave up travelling and moved with his family to Jena in central Germany, but his circumstances deteriorated and he descended into debt and poverty, dying in 1801. Papers on alchemy were found after his death.

Stamitz wrote symphonies, symphonies concertantes, and concertos for clarinet, cello, flute, oboe, bassoon, basset horn, violin, viola, viola d'amore and different combinations of these instruments. Some of his clarinet and viola concertos are particularly admired. He also wrote duos, trios and quartets. Two operas, Der verliebte Vormund and Dardanus, are now lost. Stylistically, his music resembles that of Mozart or Haydn and is characterized by appealing melodies, although his writing for the solo instruments is not excessively virtuosic. The opening movements of his orchestral works, which are in sonata form, are generally followed by expressive and lyrical middle movements and final movements in the form of a rondo.

Mannheim Palace in the 18th century

Carl Stamitz was born at Mannheim and baptized on 8 May 1745, the eldest son of Johann Stamitz, a violinist and composer of the early classical era. Johann Stamitz was the leader of the court orchestra at Mannheim Palace, and trained it to be disciplined and technically polished. The players created a sensation with their ability to play with subtlety and precision, as well as with a great dynamic range.[1]

Carl received his first lessons in violin and musical composition from his father. After Johann Stamitz's death in 1757, the 12-year-old Stamitz was taught by the composer Christian Cannabich, his father's successor as concert-master and leader of the Mannheim orchestra. Ignaz Holzbauer, the court-director of music, and the court-composer Franz Xaver Richter also had a hand in the boy's education.[citation needed]

By the time he was seventeen, Stamitz was employed as a violinist in the court orchestra. In 1770, he resigned from his post and began travelling. As a travelling virtuoso on the violin, the viola and viola d'amore, Stamitz often accepted short-term engagements, but never managed to gain a permanent position with one of the European princes or in one of the orchestras of his time.[citation needed]

In 1770 he went to Paris, where he went into service with Louis, Duke of Noailles, who made him his court composer. He also appeared in the Concerts Spirituels, sometimes together with his brother Anton, who had probably come to Paris with him. With Paris as his base, he made frequent concert tours to a number of German cities: on 12 April 1773 he appeared in Frankfurt; a year later he was in Augsburg; and in 1775 he ventured as far as the Russian capital, Saint Petersburg. In 1777 he dwelt for a time in Strasbourg where Franz Xaver Richter was music director. During the years 1777 and 1778 he was successful in London, one of many Austro-German musicians, such as Carl Friedrich Abel, J. C. Bach and in his last years Haydn, to be drawn there. His stay in London was possibly facilitated through his contact with Thomas Erskine, Earl of Kellie (1753–1781), who had received lessons from Carl's father Johann during a tour of the continent. Between 1782 and 1783, Stamitz gave concerts in The Hague and in Amsterdam. In 1785 he returned to Germany to appear in concerts in Hamburg, Lübeck, Braunschweig, Magdeburg and Leipzig. In April 1786 he made his way to Berlin, where on 19 May 1786 he participated in the performance of Handel's Messiah, under the baton of Johann Adam Hiller.[citation needed]

He later travelled to Dresden, Prague, Halle and then Nuremberg, where on 3 November 1787 he staged a Great Allegorical Musical Festivity in Two Acts in celebration of the balloon ascent of the French aviation pioneer Jean-Pierre Blanchard. During the winter of 1789–90 he directed the amateur concerts in Kassel, but failed to gain an employment with the Schwerin court. By now married and the father of four young children, he was forced to resume a life of travelling.[citation needed]

On 12 November 1792 he gave a concert in the Weimar court theatre, which was then under the direction of Goethe. In 1793 he undertook a last journey along the River Rhine to his native Mannheim, before he finally gave up travelling. Sometime in the winter of 1794–95 he moved his family to the university town of Jena in central Germany.[citation needed]

During the years Stamitz spent at Jena, there was neither a town band nor an orchestra to speak of. According to some sources, he was in some way connected to the university, but this seems a matter of dispute. Stamitz gradually descended into poverty. After his death in November 1801, a substantial number of tracts on alchemy were found in his library. Because of this it is thought that he dabbled in attempts at making gold.[citation needed]

Carl Stamitz wrote more than 50 symphonies, at least 38 symphonies concertantes and more than 60 concertos for violin, viola, viola d'amore, cello, clarinet, basset horn, flute, bassoon and other instruments.[2] He also wrote a large volume of chamber music. Some of the clarinet and viola concertos that Stamitz composed are considered to be among the finest available from the period.

During the period when he lived in Paris, Stamitz began to cooperate with the Bohemian born clarinet virtuoso Joseph Beer (1744–1811), which proved fruitful for both Stamitz and Beer. At least one of Stamitz's clarinet concertos (the concerto No. 6 in E-flat major) seems to have been composed jointly by the two men, as both of their names appear on the title page of the Viennese manuscript. Stamitz was the first composer to specify a left-hand pizzicato (an important virtuoso device) in a musical composition.[3] This occurs in his Viola Concerto in D major, where the passage in question is designated by an "0" above the notes.

Stamitz's cello concertos were written for Frederick William II of Prussia, who was a gifted amateur musician: both Mozart and Beethoven wrote music for the king.[citation needed]

Stylistically, Stamitz's music is not too far removed from the galante works of the young Mozart, or those of Haydn's middle period. Stamitz's works are characterized by regular periods and appealing melodies, with the voices quite often led in thirds, sixths and tenths. The writing for the solo instruments is idiomatic and virtuosic, but not excessively so.[citation needed]

The opening movements of Stamitz's concertos and orchestral works are regularly constructed in sonata form, with an extensive double exposition. Their structure is additive in nature and does not exhibit the thematic development that is considered typical of the Viennese classical style. The middle movements are expressive and lyrical, sometimes called 'Romance' and usually constructed according to the Liedform (ABA, ABA' or AA'B). The final movement is often (and in the concertos almost always) a French-style rondo.[citation needed]