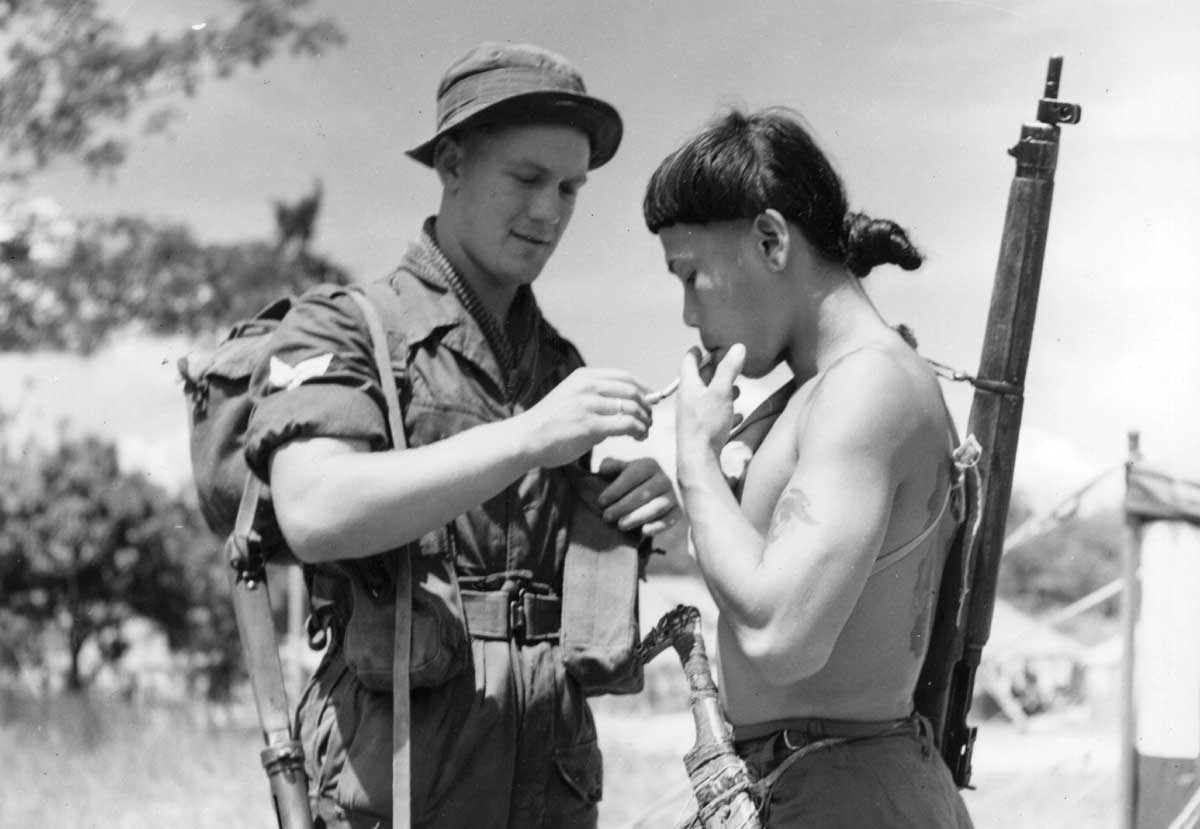 On 28 April 1952 a photograph of a British soldier exhibiting the head of an alleged communist insurgent was published on the front page of the Daily Worker newspaper under the heading ‘THIS IS THE WAR IN MALAYA’. At the time of publication, four years had passed since Britain’s decision to declare an official state of ‘Emergency’ in Malaya – then a group of colonial protectorate states in South-East Asia, which later became the states of Malaysia and Singapore. British efforts to suppress an independence struggle led by the communist guerrilla Malayan National Liberation Army (MNLA) had so far proven unsuccessful, despite the expense that the postwar government had channelled into an aggressive counter-insurgency campaign in the region. An area rich in natural resources, Malaya was then one of the most profitable territories in a rapidly diminishing British Empire. The colonial authorities were desperate to maintain a monopoly on the vastly exploitative rubber and tin industries they had established there in previous centuries.

By the early 1950s Britain’s undeclared war in Malaya had caught the attention of a small but dedicated section of the British public, mostly associated with anti-colonial, anti-capitalist and anti-war protest movements. Their campaigning efforts varied from picketing events to newsletters, but there is little to suggest that these efforts translated into any kind of mainstream protest or resistance movement in Britain. Editors at the Communist Daily Worker hoped that a sharp injection of shocking imagery would shake the British public out of their apparent apathy.

The photograph in question, which the newspaper obtained from a British soldier who had recently returned from Malaya, offered evidence that British troops were complicit in long-outlawed headhunting practices. Headhunting had gained a resurgence in the Far East during the Second World War, where Allied forces had encouraged indigenous ‘Dyak’ hunters, native to Borneo, to present the heads of enemy dead as proof of their loyalty to the Allied cause. Reinforced through the production and circulation of trophy imagery, it remained a common, albeit taboo, counterinsurgency tactic adopted by Western powers in South-East Asia during the postwar years and an overtly racialised way of asserting white military superiority.

The British government’s strategic positioning of the Malayan campaign as an ‘Emergency’ rather than an officially declared conflict meant that combatants on all sides were unprotected by international protocols such as the Geneva Conventions, where codes of conduct around the desecration of enemy war dead had been written into law. Nevertheless, British armed forces overseas were expected to conform – or at least be seen to conform – to basic standards of moral decency. This no doubt played into the Daily Worker editors’ decision to leak a photograph in which a white British soldier, rather than the Special Forces troops beside him, is implicated in an act of banal savagery, in direct contradiction with the popular image of the ‘civilised’ soldier-hero.

The immediate response from readers was one of moral outrage. Employees at the Willesden factory of British Thomson-Housten, then the biggest engineering factory in London, were so moved by the exposé that they sent a petition to the Colonial Secretary, Oliver Lyttleton, demanding an end to such atrocities in Malaya. The newspaper was soon inundated with requests that the photograph be reprinted in leaflet form and circulated around factories, offices and trade unions. The editors obliged, issuing reproductions of the photograph for 15 shillings per 1,000 copies.

The reaction from Whitehall was less enthusiastic. While the government claimed that they would formally investigate the matter, there were whisperings around the House of Commons that the photograph had been faked. As other corners of the national and regional press caught wind of the controversy, the Daily Worker began to face accusations that the image had been staged as part of a Communist hoax and they found itself engaged in a protracted debate about the photograph’s authenticity. In the following days, the newspaper fought back by publishing a number of equally horrific headhunting photographs from the same album, accompanied by a mounting case of anecdotal evidence. On 30 April it added that the event captured in the photograph had taken place the previous year in a village known as K.K, or Kuala Kesan. In another article dated 3 May they described how a British soldier had walked into the Daily Worker office to confirm the authenticity of the photograph and had said that he had seen worse. In these accounts the newspaper also included claims that atrocities committed by British forces in Malaya were not limited to headhunting, but extended to the burning of whole villages and the imprisonment of civilians in concentration camps.

On 7 May the government issued an official statement that the Daily Worker photographs were, in fact, believed to be genuine. In the same statement, however, Lyttleton attempted to shift accountability away from British forces by insisting that the atrocity had been an isolated incident, in which the heads of the alleged insurgents had been brought to the camp by Dyak hunters working for the British solely for ‘identification purposes’.

As the debate moved from the authenticity of the photographs to the frequency of these alleged headhunting practices, the Daily Worker yielded, publishing a front-page report on 10 May with the headline ‘END THIS HORROR’. By this point, the paper’s editorial staff were beginning to feel uneasy about the sensationalist tone of their coverage and their role in stimulating a public demand for morbid imagery. Hoping that their decision to leak the headhunting photographs had not been in vain, the news editor, Frank Gullett, urged the public to act immediately in order to ‘stop such things being done in their name’.

Historians and researchers working with photographs of atrocities must also grapple with the ethical parameters of withholding or reproducing traumatic imagery. While the ‘Emergency’ in Malaya officially ended in 1960, the forms of violence contained in photographs such as those leaked by the Daily Worker risk upsetting, even harming, contemporary readers. Reproducing images of the victims of atrocities should be made with the utmost sensitivity and care, regardless of their potential to shock and galvanise viewers to do something about those unjust and illegal actions.