All Roads Lead to Edo: The “Sankin Kōtai” System

Samurai from domains across Japan regularly traveled to Edo and stayed in the city under the sankin kōtai system in the Edo period (1603–1868). An overview of the system that governed much of life for the ruling class for hundreds of years. 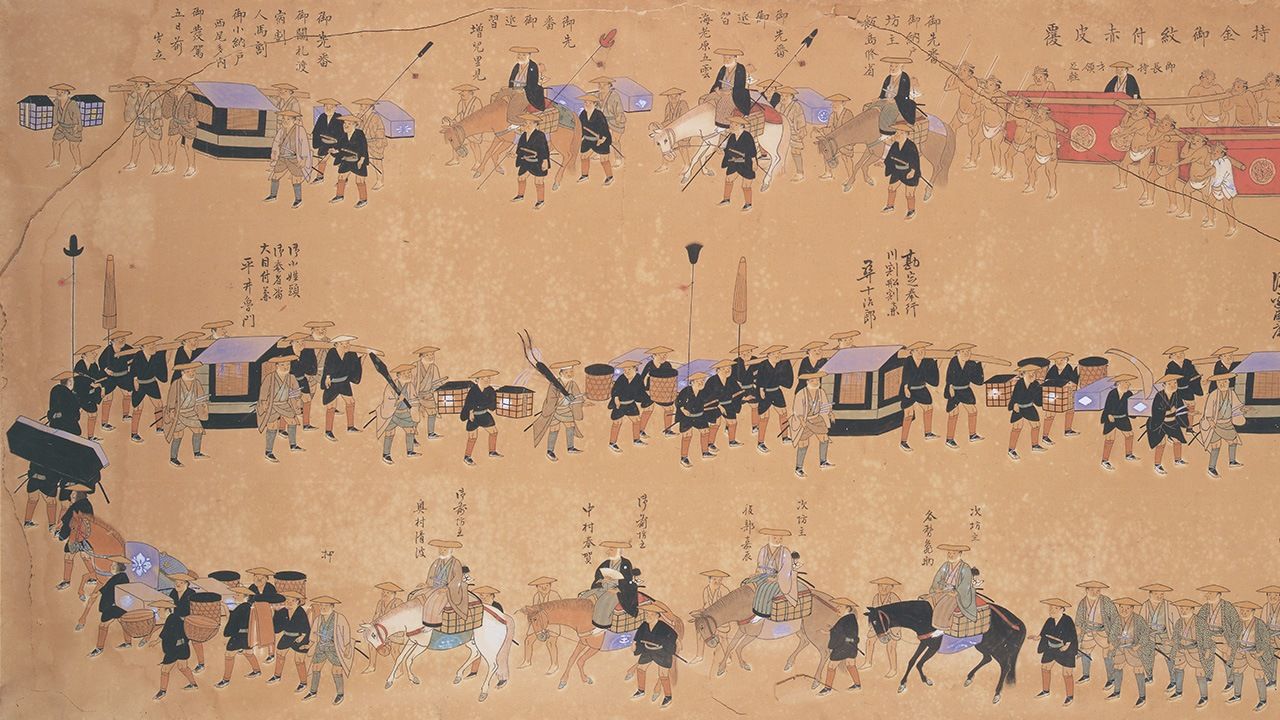 A New Custom for a Peaceful Era

During the Edo period (1603–1868), Japan was divided into around 300 domains. Their wealth was measured in koku, a unit equivalent to around 150 kilograms of rice. Those domain leaders with control over territory that produced 10,000 koku or more, as granted by the shogunate, were known as daimyō.

Under earlier shogunates in the Kamakura period (1185–1333) and Muromachi period (1333–1568), daimyō demonstrated submission to the shōgun through military service in the conflicts that frequently arose. The Edo period, however, was largely a peaceful era. A new custom developed of daimyō showing their loyalty by traveling to Edo (now Tokyo) for an audience with the shōgun and then remaining in the city for some time. For regional daimyō the journey to Edo essentially became one of their duties.

When Tokugawa Ieyasu established the long-lasting shogunate that would bear his house name in 1603, he designated Edo Castle as a place for issuing official orders and for audiences with vassals.

The sankin kōtai system, literally meaning “alternate attendance,” is thought to have begun in 1615, after Ieyasu ensured his total control of the country with victory over the Toyotomi clan at Osaka Castle.

Documents from the Satake family of the Akita domain (now Akita Prefecture) show a cycle of spending half the year in Edo and half the year in the domain, until 1617. The clan faithfully spent six months each year on attending the shōgun, and other domains likely did much the same.

From around 1618, this changed to a pattern of one year in Edo followed by one year in the domain, which became the standard for sankin kōtai. At this point, it was still not strictly codified, and derived from daimyō acting in a way that they thought would please Ieyasu.

In 1635, however, it did become official. The third shōgun, Tokugawa Iemitsu, issued an edict revising the Buke shohatto (Laws for the Military Houses) to state clearly that in the fourth lunar month of each year, different groups of domain leaders had to rotate from their domains to Edo or vice versa.

For example, Daimyō A comes to Edo in the fourth month of one year and remains there until the third month of the following year. At this time, Daimyō B replaces him in Edo, spending the next year there, while Daimyō A is on home territory. Thus, daimyō took turns in their alternate attendance on the shōgun. From this point onward, sankin kōtai was a duty. 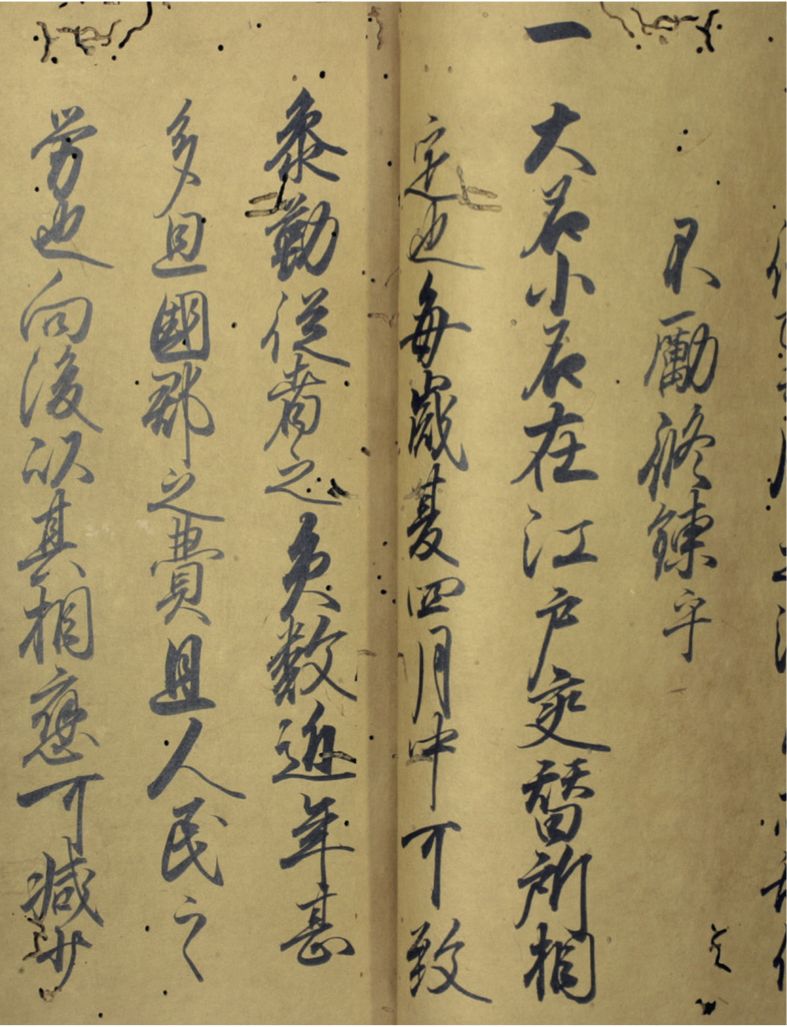 Over the more than 250 years of the Edo period, the sankin kōtai system underwent several reforms. The most significant came in 1722, when Tokugawa Yoshimune divided the domains into four groups, reducing the time spent in Edo to 6 months compared with 18 months in home territory. This measure reduced the burden on domain finances.

Even with the reduction, however, attendance still involved huge costs, and for many domains there was no great economic improvement.

Labor costs were the main reason for spiraling expenses. The term sankin kōtai conjures up an image in Japan of a magnificent military parade in which a snaking procession of warriors are equipped with spears and firearms, despite the lack of opportunity to use them. It was a performance with the purpose of promoting the dignity of the daimyō.

With men and armaments prepared, the group would take several days to walk to Edo—or it could be a number of weeks from the more distant domains. It must have required huge financial outlays, given the cost of accommodation for large parties along the way and in Edo.

The below picture shows the 1818 procession of samurai from the Tsuyama domain in Mimasaka province (now Okayama Prefecture). The lord travels in the litter displayed in the middle row. The top row includes musketeers to the left and archers to the right. This is only the fifth of seven panels of a fusuma (sliding door) artwork. There would have been seven times as many men, weapons, and other trappings traveling together the more than 600 kilometers from Mimasaka to Edo, and then the same distance back home.

Jūman-goku gokazō-go hatsu-gonyūkoku otomo tate no zu (The First Return Home After the Increase to 100,000 Koku) shows the procession back home from Edo after the Tsuyama domain had its income increased by 50,000 koku to 100,000. The domain leader in the litter was Matsudaira Naritaka. (Courtesy Tsuyama City Museum)

It is often said that the purpose of sankin kōtai was to place a ruinous financial burden on domains, weakening them so they could not rebel against the shogunate.

However, as the shogunate repeatedly instructed domains to curb excessive spending on alternate attendance, this may not have been the case. Display was another major factor, as domains wanted to make a show on the road and live an upscale life in Edo so they would not be looked down on as bumpkins.

(Originally published in Japanese on November 22, 2020. Banner image: The first panel of Jūman-goku gokazō-go hatsu-gonyūkoku otomo tate no zu [The First Return Home After the Increase to 100,000 Koku]. Depicted to the left of the top row are members of the troop that started out on the road five days before the main group to secure accommodation. In the center of the middle row, the litter carries the magistrate responsible for accounting during the journey. Courtesy Tsuyama City Museum.)