A Grand Gesture: Henry VIII and the Westminster Tournament

A Grand Gesture: Henry VIII and the Westminster Tournament

This Valentine’s Day, if you’re stuck for something to do, you might like to take inspiration from Henry VIII of England, who, in February 1511, hosted an extravagant tournament in honour of his (then) wife, Katherine of Aragon and their new-born son.

Henry celebrated the birth of his much-desired son with Katherine by hosting a grand tournament in Westminster. This might seem like the ultimate romantic gesture, but, in fact, the star of this show was Henry and no one else. Henry was the second son of the previous king, Henry VII, and was never meant to be king (that honour should have gone to his brother, Arthur). When Arthur died, the young Henry was dragged from his life of courtly leisure and into a role he hadn’t been prepared for. Henry brought with him his love of jousting – and all the extravagance, spectacle, and intense competition that came along with it. Unlike the popular modern image of the elderly, corpulent Henry, as a young man the king was slim and fit and bursting with energy.

The tournament was held over two days: 12-13 February. The cost for those two days came to over £4,000 – a hefty sum. The announcement for the event came in the form of an elaborate allegorical letter, which was said to be sent out by the queen of the land of Cuere Noble, who was sending her four champions to joust against any who wished to challenge them. These champions were to include, of course, Henry, jousting under the moniker Noble Cuere Loyall, and three other prominent knights of his court, each of whom also competed under assumed names – a romantic tradition common to the form of tournament known as a pas d’armes held in the prosperous court of Burgundy.

The Westminster tournament is so well known today, because it was immortalised in the Westminster Tournament Roll. Almost sixty feet long, the Roll was produced as, essentially, a piece of propaganda, and, although it was purportedly made in honour of Katherine and her new-born son, Henry is the undisputed central figure of the document. It was meant to record the magnificence of Henry and his court and to gain him recognition on the European stage as a powerful and prosperous monarch. After all, he had only come to the throne two years early, in 1509, and he was only eighteen when he did so.

Henry was canny enough to see the use of the tournament as a tool – similar to the aging Holy Roman Emperor and fellow jousting fanatic Maximilian I, whom Henry admired. He made tournaments a central part of Tudor court life and made an effort to project his prestige through displays of wealth and theatre. This was a very different tactic from his more reserved and fiscally conservative father, Henry VII. And the tournament in the sixteenth century was perfectly suited to serve as Henry’s political tool. It was moving further and further away from its original purpose as a form of military training and was evolving into a distinct sport that was a unique blend of theatre and athletic skill.

The Westminster Tournament Roll is divided into three scenes: the entry of the competitors into the lists, Henry jousting against an opponent, and the procession out of the lists. Although Henry is, unsurprisingly, central to each of these scenes, he really takes centre stage in the second, which is the only scene of actual tournament action in the Roll. In it, Henry can also be seen breaking his lance on his opponent’s helm. Now, this was the best possible stroke it was possible to score in a joust, so the viewer ought to be impressed by Henry’s prowess. However, the image is entirely fiction; in fact, Henry never actually scored this hit. The artist of the Roll embellished his success; he was the king, after all.

If you want to see more images from the Westminster Tournament Roll, the John Blanke Project, ‘a contemporary Art and Archive project celebrating John Blanke, the Black trumpeter to the courts of Henry VII & Henry VIII’ (that I first mentioned in my interview with Black Tudors author Miranda Kaufmann) has been tweeting images from the Roll, following along with the action as it unfolded. 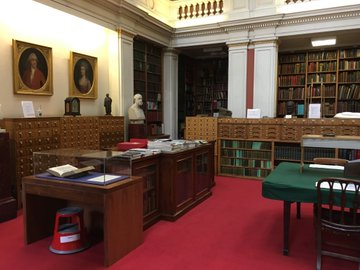 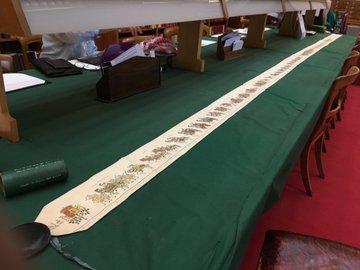 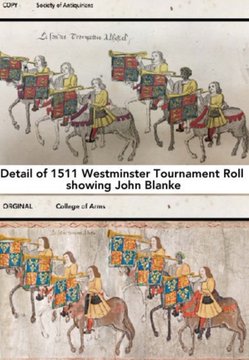 Of course, we know that Katherine was not to remain Henry’s wife (and their son was tragically short-lived). And, clearly, Henry made sure that the Westminster Tournament and the accompanying Roll was focused more on him than anyone else. So perhaps, after all, Henry VIII is not the person to look to for inspiration this Valentine’s Day…