The words of the 8th-century Saint Bede are among those that have been found by detecting iron, copper and zinc – constituents of medieval ink 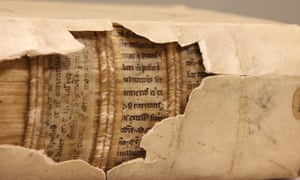 Medieval manuscripts that have been hidden from view for centuries could reveal their secrets for the first time, thanks to new technology.

Dutch scientists and other academics are using an x-ray technique to read fragments of manuscripts that have been reused as bookbindings and which cannot be deciphered with the naked eye. After the middle ages manuscripts were recycled, with pages pasted inside bindings to strengthen them. Those fragments may be the unique remains of certain works.

Professor Joris Dik, of the Delft University of Technology, described the potential for finding new material with clues to the past as “massive”. The technology does not just make hidden texts visible, but legible.

Access to such “hidden libraries” has been made possible by macro x-ray fluorescence spectrometry (MA-XRF), which allows pages to be read without removing the bookbinding.

Bindings made between the 15th and 18th centuries often contain hidden manuscript fragments that can be much older. Bookbinders used to cut up and recycle handwritten books from the middle ages, which had become old-fashioned following the invention of printing. These fragments, described by Kwakkel as “stowaways from a distant past”, are within as many as one in five early modern age printed books.

Kwakkel added: “Much of what we’re finding is 15th or 14th century, but it would be really nice to have Carolingian material, so from the ninth century or even older. It would be great to find a fragment of a very old copy of a Bible, the most important text in the middle ages. Every library has thousands of these bindings, especially the larger collections. If you go to the British Library or the Bodleian [in Oxford], they will have thousands of these bindings. So you can see how that adds up to a huge potential.”

Experiments have found a fragment from a 12th-century manuscript that includes excerpts from the work of Bede, the 8th-century monk and scholar. The researchers were even able to disassemble multiple pages that had been pasted on to one another, making the text legible. In one case, they could read each of three medieval pages that had been glued together. Elsewhere, they found two fragments stuck together underneath the cover of a 16th-century binding. 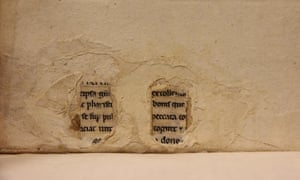 Another example of manuscript fragments in one of Leiden University’s books. Photograph: Erik Kwakkel


Dik’s team originally developed the technology, in collaboration with others, to “visualise” hidden layers in Old Master paintings. In 2011, for example, they discovered a previously unknown self-portrait by Rembrandt beneath another work. Although faint and unfinished, it dispelled doubts about the surface picture’s attribution to the 17th-century Dutch master, to the excitement of art historians.

Now the technology has proved to be “equally efficient in the visualisation of hidden medieval inks,” he said. “A thin beam of x-rays is used to scan the object, charting the presence and abundance of various elements below the surface. That is how iron, copper and zinc, the main element constituents of medieval inks, could be viewed, even when covered by a layer of paper or parchment.”

The problem, though, is that the current methodology is painfully slow, with scans sometimes taking more than 24 hours. Faster techniques are being explored. Dik said: “Right now, we’ve shown that it works.”

The research has been subsidised by the Young Academy, a branch of the RoyalNetherlands Academy of Arts and Sciences.

Last year it emerged that techniques had been developed to decipher ancient papyrus scrolls that were burned black and buried in ash when Mount Vesuvius erupted 2,000 years ago. Vito Mocella, a scientist in Naples, found that they could read some of the scrolls without unravelling them by peering inside with x-rays.

Referring to Mocella’s technology, Dik said: “It’s different. The papyrus texts are hidden inside papyrus. We’re looking at stuff that is covered by something that is much thicker. Parchment and papyrus are quite different. Parchment is a much thicker, denser material.”