What Alexander Hamilton Would Have Thought About a Wealth Tax 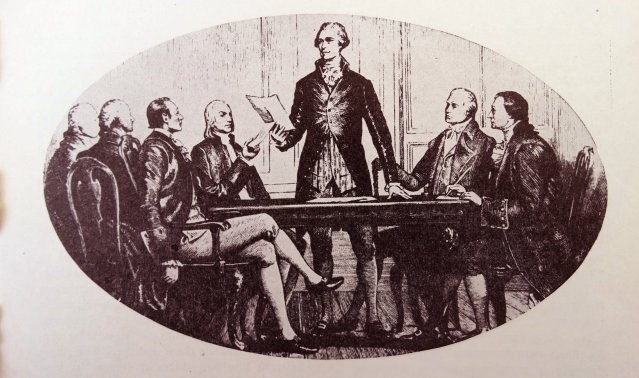 This post is in partnership with the History News Network, the website that puts the news into historical perspective. A version of the article below was originally published at HNN.

Wealth taxes are on the current political table and hotly debated. All taxation was on the framers’ table as they considered a new constitution. What would they make of the measures we are considering now? And more to the point: does the Constitution they drafted allow Congress to tax a person’s overall wealth?

The short answer: yes and no. The longer answer requires historical context.

In the six months preceding the Federal Convention of 1787, Congress received from the separate states, which alone possessed powers of taxation, a grand total of $663—hardly enough to run the nation. Little wonder that the framers’ proposal, what is now our Constitution, granted Congress sweeping authority to levy taxes: “The Congress shall have Power to lay and collect Taxes, Duties, Imposts and Excises …”


Although taxing authority was broad, the framers delineated only five specific types, each with a qualification:


“Duties, Imposts, and Excises shall be uniform throughout the United States.”

“No Capitation, or other direct, Tax shall be laid, unless in proportion to the Census or enumeration.”

“No Tax or Duty shall be laid on any Articles exported from any State.”


Presumably any taxes not mentioned would have to meet qualifications as well. The underlying principle was fairness, but mechanisms to achieve that goal differed. Exports were ruled out so Congress wouldn’t handicap Virginia, for instance, by taxing tobacco. Most other taxes would be uniform. Direct taxes, on the other hand, had to be apportioned according to state populations.

But what, exactly, was a direct tax? And how might that differ from its opposite, an indirect tax, a term that does not appear in the Constitution?

That’s what Rufus King, delegate from Massachusetts, asked his colleagues at the end of the day on August 20, 1787, after some twelve weeks of deliberations. From James Madison’s Notes of Debates: “Mr. KING asked what was the precise meaning of direct taxation. No one answered.” We have no indication that the framers ever defined direct and indirect taxation, either then or at any other time during their proceedings.

Fast forward to the mid-1790s, when two former delegates weighed in. Alexander Hamilton, while Secretary of the Treasury, recommended a federal tax on carriages, an item that only rich people could afford. Congress levied that tax, but Daniel Hylton, a carriage owner, challenged the measure on constitutional grounds. It was a direct tax, he argued, and Congress had failed to apportion it amongst the states. The case found its way to the Supreme Court. There, Associate Justice William Paterson, who had introduced the New Jersey plan at the Federal Convention, offered a coherent explanation of the framers’ treatment of taxation:


“It was … obviously the intention of the framers of the Constitution, that Congress should possess full power over every species of taxable property, except exports. The term taxes, is generical, and was made use of to vest in Congress plenary authority in all cases of taxation… All taxes on expences or consumption are indirect taxes. … Indirect taxes are circuitous modes of reaching the revenue of individuals, who generally live according to their income. In many cases of this nature the individual may be said to tax himself.”


An individual taxes himself because he chooses to participate in an activity that is taxed; he can circumvent the tax by not purchasing or consuming the item in question. That’s what makes it “indirect.” A “Capitation, or other direct, Tax” is not optional in this sense; both capitation taxes and property taxes were widespread in America, and a person does not choose to be a person (a capitation tax), nor willingly decide to own no property. But why didn’t the framers apply the simple rule of uniformity to such taxes? Paterson recalled that peculiar politics, not abstract reasoning, led to the Federal Convention’s approach:


“I never entertained a doubt, that the principal, I will not say, the only, objects, that the framers of the Constitution contemplated as falling within the rule of apportionment, were a capitation tax and a tax on land. … The provision was made in favor of the southern States. They possessed a large number of slaves; they had extensive tracts of territory, thinly settled, and not very productive. A majority of the states had but few slaves, and several of them a limited territory, well settled and in a high state of cultivation. The Southern states, if no provision had been introduced in the Constitution, would have been wholly at the mercy of the other states. Congress in such case, might tax slaves, at discretion or arbitrarily, and land in every part of the Union after the same rate or measure: so much a head in the first instance, and so much an acre in the second. To guard against imposition in these particulars, was the reason of introducing the clause in the Constitution, which directs that representatives and direct taxes shall be apportioned among the states, according to their respective numbers.”


In the end, Paterson and his fellow justices concluded that the tax on chariots must be considered indirect. To apportion the tax among the states would be absurd, they argued; if there was only one chariot owner in a state, he would have to assume his state’s entire liability. And if there were no chariots, how could that state ever meet its apportioned share? But to strike down a tax on chariots because it was unworkable would seriously undermine Congress’s critical authority “to lay and collect Taxes,” which buttressed the entire governmental apparatus. The only alternative was to declare Hamilton’s chariot tax indirect—and thereby constitutional.


What might Paterson and his colleagues have concluded if Congress had levied a tax on all wealth, not just one particular luxury item? That depends. They might have applied the same reasoning: treating a wealth tax as “direct” would be hopelessly impractical, but if seen as an excise, it would fall within Congress’s plenary powers of taxation. Indeed, any tax (except one on exports) that the framers had not categorized as “direct” would be constitutional, if applied uniformly. So it all boils down to one question: what taxes, exactly, are to be considered direct?

While Paterson enumerated “a capitation tax and a tax on land” as the “principal” taxes “falling within the rule of apportionment,” he hinted they might not be the “only” ones. Perhaps he could envision others, taxes that were not addressed at the Federal Convention. New England governments in those times relied heavily on property taxes that included not only raw land but also improvements and livestock, which made the land more valuable. Such taxes were not based on “expences or consumption,” activities that might be avoided—Paterson’s criteria for indirect taxes. They taxed who a person was, economically—the apparent (although unstated) standard for a direct tax.

Alexander Hamilton made this explicit. Within a brief filed for Hylton v. United States, he added a third category to the list of direct taxes:


“What is the distinction between direct and indirect taxes? It is a matter of regret that terms so uncertain and vague in so important a point are to be found in the Constitution. We shall seek in vain for any antecedent settled legal meaning to the respective terms—there is none.

“But how is the meaning of the Constitution to be determined? It has been affirmed, and so it will be found, that there is no general principle which can indicate the boundary between the two. That boundary, then, must be fixed by a species of arbitration, and ought to be such as will involve neither absurdity nor inconvenience.

“The following are presumed to be the only direct taxes.

Taxes on lands and buildings.

General assessments, whether on the whole property of individuals, or on their whole real or personal estate; all else must of necessity be considered as indirect taxes.”


In Hamilton’s estimation, any “general assessment” of a person’s “whole” property or estate—what we call today a wealth tax—was one of those “other” direct taxes that must be apportioned amongst the states. But to apportion a wealth tax would be absurd; today, a handful of wealthy individuals in West Virginia or Mississippi, to account for their state’s quota, would have to pay several times as much as those residing in states with numerous rich taxpayers. In Hylton v. United States, the Supreme Court used the unfairness of apportionment to declare the chariot tax indirect, and therefore constitutional, but according to Hamilton, that line of reasoning is off the table. A wealth tax is a direct tax, pure and simple, he reckoned; unless apportioned, it will be unconstitutional.


Of course Hamilton was not on the Supreme Court, so his statement has no official bearing. Legal scholars might disagree with his assessment of “general assessments,” but politically, that is beside the point. No wealth tax based on apportionment among the states will make its way out of committee, and any wealth tax claiming to be “indirect” will inevitably wind up before the Supreme Court. There, originalists who idolize the framers will look no farther than Hamilton’s testimony to justify striking down the measure.

And all conservatives, likely the majority for years to come, will weaponize Hamilton to support their preconceived aversion to wealth taxes. They will not be swayed, as some scholars contend, by Knowlton v. Moore, which in 1900 upheld an inheritance tax by treating it as indirect. There’s plenty of wiggle room between taxing a person’s “whole real or personal estate”—a wealth tax—and taxing how a person chooses to dispense with that estate. When conservative justices weigh an obliquely relevant case from 1900 versus Hamilton’s forceful pronouncement that yields the result they prefer, there is little doubt as to which they will favor.

Might Chief Justice Roberts be a swing vote? When upholding the Affordable Care Act as within the taxing authority of Congress, he declared: “A tax on going without health insurance does not fall within any recognized category of direct tax.” Because it was “plainly not a tax of the ownership or land or personal property,” it did not have to be “apportioned among the several States.” A wealth tax, on the other hand, would target “ownership of land or personal property.” It must be apportioned, Roberts will conclude, or else it’s unconstitutional.


We have been through this before. In Pollock v. Farmers’ Loan and Trust Company (1895), the Supreme Court declared that taxing income derived from wealth (rents, interest, and dividends) was a direct tax and therefore had to be apportioned, while taxing income derived from labor (wages and salaries) was indirect and therefore did not have to be apportioned. This meant that Congress could tax working people readily, while taxing wealthy people would be unworkable. Workers cried foul. They pushed for, and got, the Sixteenth Amendment, which repudiated Pollock by lifting the apportionment requirement from all income taxes.

Today, facing rampant inequality, we can cry foul again—but we remain saddled with a provision of the Constitution geared to protect the slave-owning interests of Southern states in 1787. Even so, taxing income rather than wealth is always possible. There is no constitutional limit on the tax rate, so long as it is “uniform throughout the United States.”

Ray Raphael’s ten books on the Founding Era include A People’s History of the American Revolution (The New Press, 2001; Harper-Collins, 2002); Mr. President: How and Why the Founders Created a Chief Executive (Alfred A. Knopf, 2012); and Constitutional Myths (The New Press, 2013). His annotation of the Constitution, The U. S. Constitution: Explained—Clause by Clause—For Every Americ..., was published by Vintage in 2017. He is currently an associate editor for Journal of the American Revolution.