The Sirens: From Sage to Cannibal, From Goddess to Prostitute 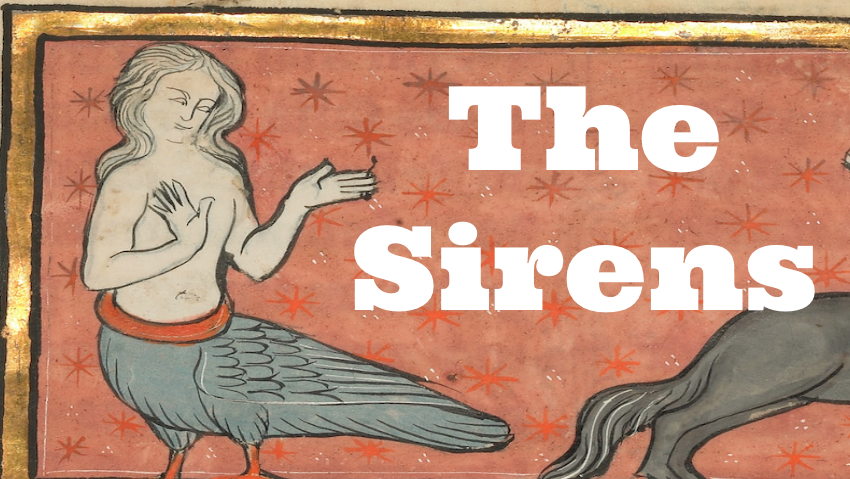 Sultry and deadly seductresses, the Sirens are fearful, yet fascinating creatures that have captivated writers for centuries. But they weren’t always depicted this way – what were the origins of the Sirens and how did they become synonymous with death, destruction, and sin?

Whoever in ignorance draws near to them and hears the Sirens’ voice, his wife and little children never stand beside him and rejoice at his homecoming; instead, the Sirens beguile him with their clear-toned song, as they sit in a meadow, and about them is a great heap of bones of moldering men, and round the bones the skin is shriveling. ~ Homer, The Odyssey, Book 12

This image of the Sirens is probably the best known. Just when Odysseus is ready to depart from Circe’s enchanted island, the mighty witch warns him of the dangers that lie ahead. One of them is the Sirens, who lure sailors to their death with their sweet songs. Although Homer never describes what they look like, it is widely believed that the Sirens are hybrid creatures with a maiden’s face and a bird’s body. Daughters of the River Achelous and the Muse Melpomene, the Sirens were once, according to the Roman poet, Ovid (43 BC – AD 18), among others, companions to Persephone. When Persephone was abducted by Hades, the Sirens travelled far and wide across the world to find her. Having failed in their task, they begged the gods to give them wings so they may, ‘float on beating wings above the waves’. The gods granted their wish, yet allowed them to retain their beautiful faces and human voices. Other versions have it that it was a punishment from Demeter for their failure to locate her daughter.

Either way, it is probably the wings and the ability to fly that gave rise to the Sirens’ association with death and the otherworld. They are capable of breaking down boundaries; and, as Persephone had become bound to the underworld, so it is only natural that the Sirens (as her associates) became immediately tied to the dead or, at least, to the chthonic.

It comes as no surprise, therefore, that the Sirens become symbols and vehicles of death, and the weapon of destruction is their song and voice. Yet a song contains both music and lyrics – which one is deadlier?

In the earlier sources, the Sirens are goddesses worthy of their divine lineage. No one can be as melodious as the Sirens, claims Alcman, a Spartan poet who lived in the seventh century BC, because they are goddesses. Indeed, they are descendants of a Muse – and not just any Muse, but Melpomene, whose very names means ‘the melodious one’. Melpomene’s mother is Mnemosyne, the goddess of memory. This gives the Sirens both the talent and materials to compose great songs. The Sirens are, in Greek geographer Pausanias’s  (AD 110–180) words, ‘charming in both poetry and prose’. This praise hints that it is in fact the words that matter.

That the Sirens seduce men with their words is confirmed in the Odyssey, when the Sirens try to lure Odysseus and his comrades away:

Come hither on your way, renowned Odysseus, great glory of the Achaeans; stop your ship that you may listen to the voice of us two. For never yet has any man rowed past the island in his black ship until he has heard the sweet voice from our lips; instead, he has joy of it, and goes his way a wiser man. For we know all the toils that in wide Troy the Argives and Trojans endured through the will of the gods, and we know all things that come to pass upon the fruitful earth. ~Homer, The Odyssey, Book 12

There is great wisdom hidden in their song; if Odysseus pays attention, he will leave a wiser (yet dead) man. This is probably why Circe suggests Odysseus should listen; she knows that the cleverest man on earth simply cannot resist such an opportunity – think of Dante’s Inferno, Odysseus is burning in Hell precisely because he is way too curious. Interestingly, the Sirens refer to the Iliad – it has been pointed out in Pietro Pucci’s, The Song of the Sirens that the epitaph, ‘great glory of the Achaeans’, is used twice in the passages in The Iliad describing Odysseus’ deeds but nowhere else in The Odyssey, In other words, the Sirens are not only trying to bring Odysseus – geographically – to their island of death, but also to bring him temporally to a bygone world, a world of great, dead heroes. In doing so, they play with Odysseus’ mind: as a great adventurer and pursuer of knowledge, he is torn between the glorious and the domestic, the unknown, and the familiar. It is never merely the voice that is seductive, but the composition, the words, and the layers of meanings hidden under the lyrics. 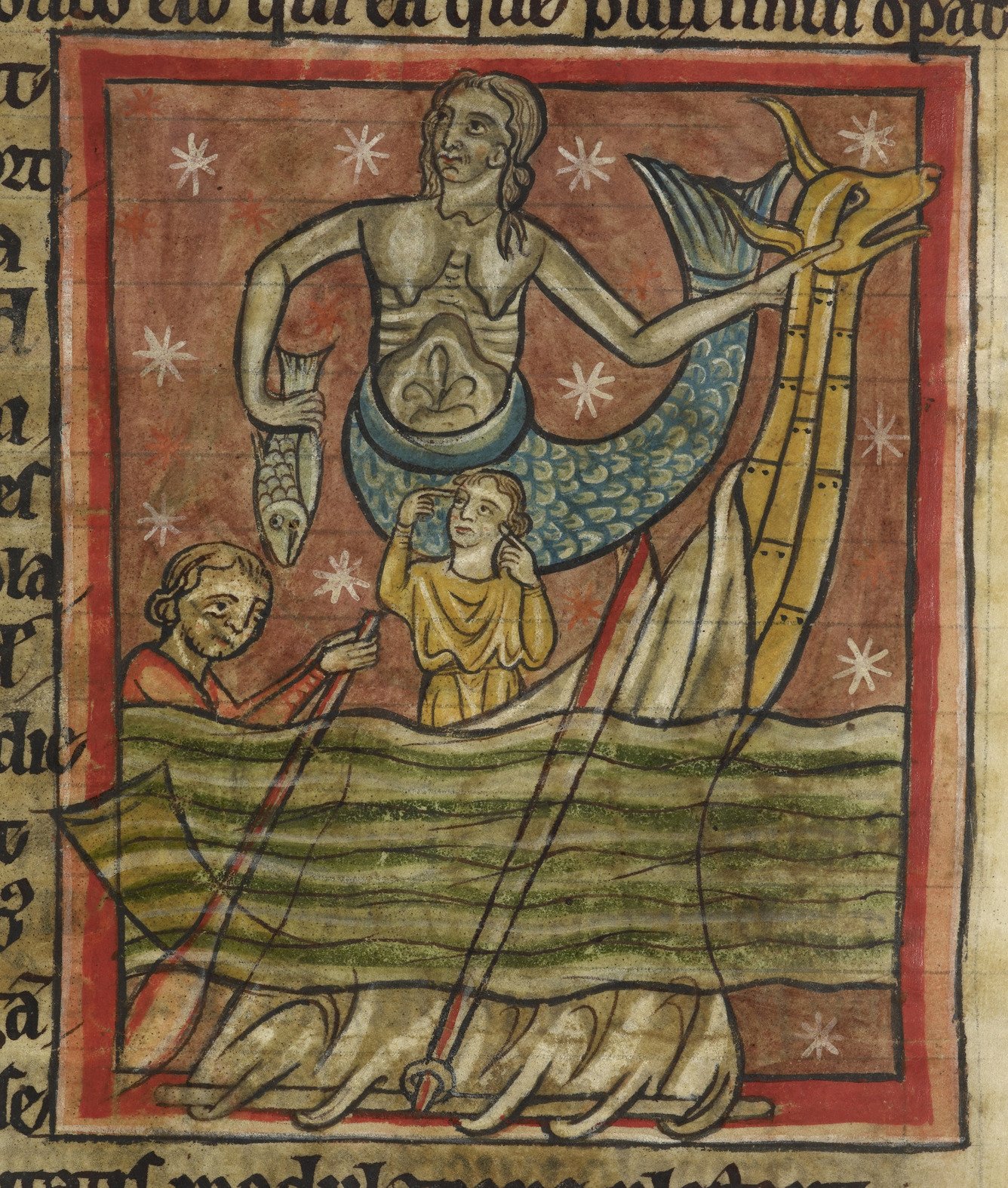 A Siren, portrayed with a fish’s tail like a mermaid, lulls sailors to sleep with her song. One sailor stops his ears with his fingers to avoid hearing her. – British Library MS Harley 4751, f.47v

Odysseus is lucky, for his shipmates have top-quality earplugs; he gets what he wants, and gets away with it. But what happens to those who are less favoured by fate? They become bones wrapped in withered skin. Have the Sirens eaten them, or do the corpses just become mummified sort of naturally (presumably it is a very hot island)? Circe never specifies, but she invites the reader to ponder over the possibility of cannibalism by putting the Sirens side by side with Scylla, a nymph turned monster, who consumes humans. Plus, the bird-like body brings the Sirens closer to the Harpies and the Sphinx, who are known for feasting on human flesh. It is very hard not to think of the Sirens in the same light.

This is what the later thinkers did think; although not all of them necessarily spelled out the Sirens’ cannibalistic diet; the focus is shifted to the Sirens’ power of seduction and destruction through body, and sexuality. As the Sirens become more associated as femme fatales, their voice takes precedence over their words, and their sexual charms over their compositional talent.

In the Suda, a tenth-century Byzantine encyclopaedia, the Sirens are described as with a bird’s body above chest and a woman’s below – precisely the opposite of what has been given by Ovid, and the emphasis on the female sexuality is foregrounded. They no longer sing of the deeds of great heroes that would make the listener, ‘go his way a wiser man’, but ‘lewd songs’, and, ‘songs of pleasure’. They are, in a way, like port prostitutes. Indeed, this is precisely how Isidore of Seville (AD 560–636) thinks of the Sirens. ‘Such creatures do not exist,’ he says in Etymologies XI, they are really just, ‘harlots, who, because they would seduce passersby into destitution, were imagined as bringing shipwreck upon them. They were said to have had wings and talons because sexual desire both flies and wounds’.

Thus, the cannibal and the seducer have become one, and converged in the monstrous female body. As the winged goddesses have gradually faded away through the passage of time, the Sirens became a metaphor of the lustful and the destructive, yet still with a touch of that monstrous beauty which makes them irresistible.