The Search for the Sultan’s Tomb 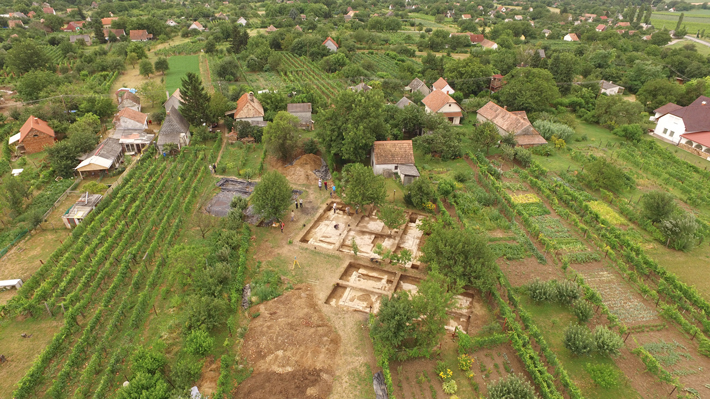 Excavations beneath two family-owned vineyards outside the Hungarian town of Szigetvar are beginning to reveal the remains of Turbek, a 16th-century complex built to honor the Ottoman sultan Suleiman I.

A red sandstone block props open the door to Gyula Kereszturi’s wine cellar in a small village in southern Hungary. Kereszturi, who ekes out a living selling homemade wine and plum brandy in one of this country’s poorest regions, found the block more than two decades ago when he expanded the cellar. Over the years, it has made a good doorstop, or sometimes a makeshift table.

But it used to be much more than that. This block was once part of the revered mausoleum complex of Suleiman the Magnificent, the Ottoman Empire’s most prolific builder and accomplished military leader. Although Kereszturi and other locals had long referred to the occasional red bricks they found buried in their yards as “Turkish ruins,” they had no idea that anything significant had ever stood there. And, until recently, neither did archaeologists. That all changed when remote sensing and later excavation revealed that the ground under Kereszturi’s house and vineyard might contain the ruins of Turbek, a once-flourishing Muslim pilgrimage destination on the ground where Suleiman died of natural causes in 1566 during the brutal Battle of Szigetvar, a crucial contest in the fight to expand the Ottoman hold on Europe.

“This is the most exciting find from the Ottoman period in Hungary,” says Norbert Pap, a geographer at the University of Pecs, who leads the ongoing work of the interdisciplinary team that first identified the ruins, whose location had eluded generations of scholars. The discovery of Turbek is significant because it is the only town the Ottomans founded in Hungary during the nearly 150 years they ruled there. “It is a symbol of the Ottoman occupation of Europe, and an expression of dar-al-Islam,” explains Pap, using the Arabic term that refers to a region under Muslim rule and where Islamic law prevails. The newly unearthed site, which covers about 10 acres and contains the foundations of a mausoleum, a mosque, a Sufi monastery, and what is likely a military barracks, offers a window into the long-vanished and oft-overlooked cultural, political, and economic life that the Ottomans carved out for themselves more than 600 miles from their capital of Istanbul.

Founded in the Anatolia region of what is now Turkey in 1299, the Ottoman Empire eventually became a global power and remained such until its demise during World War I. The empire reached its height in the sixteenth century under its longest-serving ruler, Sultan Suleiman I, known as Suleiman the Magnificent. During this period, the Ottomans extended their rule to almost all of the Middle East, North Africa, and parts of Europe. This solidified their control over lucrative trade routes, and the new wealth they amassed was reflected in a grand building spree in the capital of Istanbul. But Suleiman was intent on conquering more of Europe, especially the capital of the Habsburg Empire, Vienna. This put Hungary in the Ottomans’ strategic path. Beginning with their victory at the Battle of Mohacs in 1526, the Ottomans began to gradually conquer pieces of Hungary, turning churches into mosques, taking over fortresses, and adding elements such as bathhouses to existing cities. Although the Ottomans gained significant ground, the continuing fight put up by the Hungarians challenged their fragile hold on power.