The Medieval Origins of Quarantine 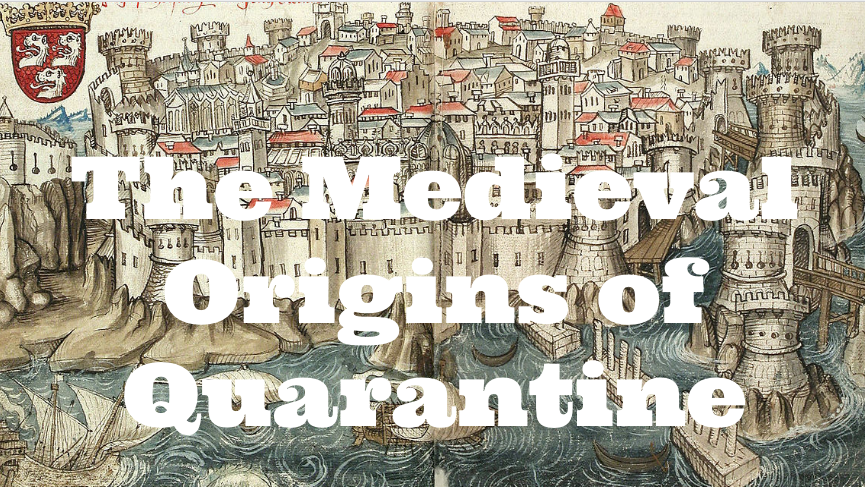 As the world deals with the coronavirus pandemic, some of the key measures authorities are using to deal with the crisis are isolation and quarantine. The origins of quarantine date back to the Middle Ages, an idea that emerged in the wake of the Black Death.

When the bubonic plague struck Europe between the years 1347 to 1351, medieval physicians did not understand how this sickness was spreading. With theories suggesting the cause ranging from ‘bad airs’ to deliberate poisoning, the measures undertaken to stop the plague usually revolved around keeping cities clean and scapegoating minorities.

After the devastating phase of the Black Death, the plague would return to parts of Europe, striking communities sometimes every five or ten years. Europeans were also learning more about how this epidemic could spread from place to place, and the danger that those who were infected posed to the rest of the population. This led some cities to enact stringent measures against those who were ill.  For example, when the plague struck Milan in 1374, the authorities ordered that all sick persons to leave the city “and take to the open country, living either in huts or in the woods until [they] died or recovered.”

However, the city of Dubrovnik (then known as Ragusa), a port of about 3000 people on the Adriatic coast, did something quite different when the plague began emerging again in the year 1377. In their book Expelling the Plague, historians Zlata Blazina Tomic and Vesna Blazina reveal that they were the first city in the world to develop and implement quarantine legislation.

City records reveal a meeting that took place on 27 July 1377. Here the 47 councillors of Durbovnik voted on a series of proposals to deal with the plague. Thirty-four agreed to a new law that would prevent “those who come from plague infested areas shall not enter Dubrovnik or its district unless they previously spend a month on the islet of Mrkan or in the town of Catvat, for the purposes of disinfection.”

With the law in place, another was added, agreed to by 44 councillors:

The residents of Dubrovnik are strictly forbidden to visit those who arrive from plague-infested areas and who will be confined on the islet Mrkan or Cavtat. Those who dare bring food or any other necessities to the interned, without permission of the officials designated for that function, will have to stay there in isolation for a month.

Tomic and Blazina explain that Dubrovnik was a city that depended on trade, especially to have food come in, so that isolating themselves off from the world was not an option. By placing suspected carriers of the plague in nearby areas – Catvat was a small town just south of Dubrovnik while Mrkan was a nearby uninhabited island, the authorities hoped they could limit the infection while only slowing down the vital trade.

Tomic and Blazina also note how important the idea of quarantine was, writing:

…in order to arrive at the preventive isolation, a major leap of knowledge was necessary in the prevention of plague: the notion of incubation and maybe also the concept of healthy carriers of disease had to be accepted.

To help enforce the new regulations, the city of Dubrovnik hired a well-known Italian physician and two surgeons. This would lead to another innovation carried out by the city in 1390: the establishment of a permanent Health Office. At first called Officials Against Those Arriving From Plague-Infected Areas, they would be responsible for carrying out the city’s regulations and even punishing offenders – they could even carry out sentences such as lashing, branding, and cutting off of one ear. In their book, Tomic and Blazina detail how this office grew in the fifteenth and sixteenth centuries, and how Dubrovnik continued their efforts to prevent plague from causing further devastation.

The success Dubrovnik achieved in containing the plague would lead to other Italian cities, such as Venice and Milan, to emulate it with similar measures. The term quarantine means a period of forty days, but cities implemented various time-periods for how long a person might be isolated, ranging between eight and 80 days. Jane Stevens Crawshaw explains:

The basic idea was that the separation of the sick (and eventually those suspected of having contracted the plague) was essential in order to prevent the spread of the disease. Quarantine measures were imposed upon inhabitants when cities were infected, as well as upon incoming travellers and merchants; they would come to encompass not only individuals but also their clothing, their possessions and their homes. Quarantine could be carried out in the domestic setting, but often separate buildings were set aside or specially constructed to serve communities as plague hospitals and to facilitate the care of patients while they remained in isolation.

The practice of quarantine and plague hospitals would gradually spread into the rest of Europe over the fifteenth and sixteenth centuries – it was a concept that appealed to the civic mindedness and spirit of charity of medieval communities. These measures offered some measure of protection against the plague while assisting those infected. Quarantine has endured as a public health practice for centuries since then, and is even used in the present-day battles against pandemics. 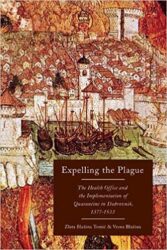 Zlata Blazina Tomic and Vesna Blazina’s book Expelling the Plague: The Health Office and the Implementation of Quarantine in Dubrovnik, 1377-1533, was published by McGill-Queen’s University Press in 2015. Jane Stevens Crawshaw’s article, “The Renaissance Invention of Quarantine,” appears in The Fifteenth Century XII: Society in an Age of Plague, edited by Linda Clark and Carole Rawcliffe, and published in 2013.

See also: The Coronavirus is not the Black Death

Top Image: 15th century image of Dubrovnik, from Konrad von Grünenberg’s Description of the journey from Constance to Jerusalem