The lost synagogue of Trieste 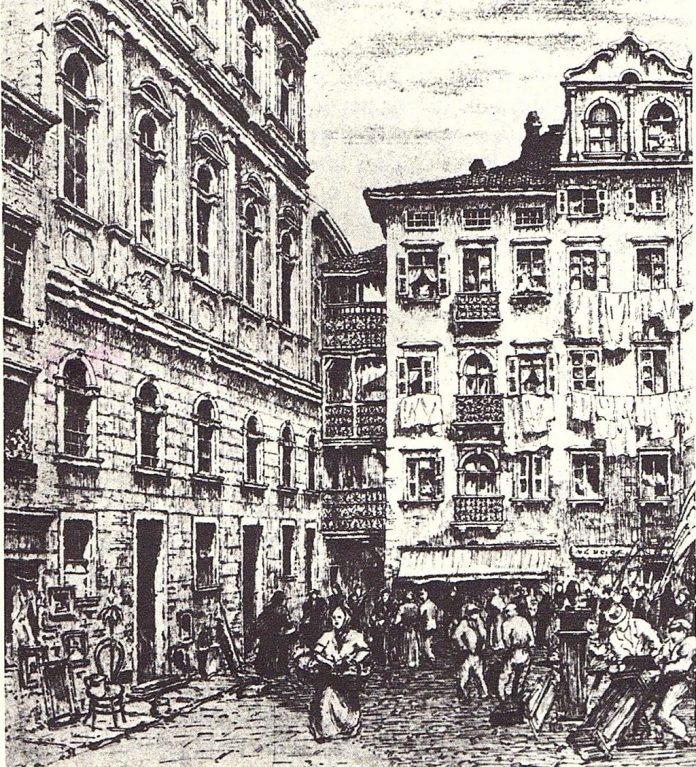 28.03.2020 – 07.30 – The Jewish community of Trieste has its origins in the 14th century when a first nucleus of Israeli bankers was formed; later the community remained fairly small until the 17th century, when it counted around sixty inhabitants.
The “free port” license also triggered a radical change for the Jewish community which grew rapidly, rising to 103 inhabitants in 1735 and 670 in 1788.
Although complete emancipation only came about during the Napoleonic occupation, in Trieste the “seeds” had already been “sown” by the sovereign licenses of Maria Theresa of Austria (1771) and Joseph II’s Toleranzedikt (1781) which accompanied the abolition of the ghetto’s ignominy (1785).
In this context, before the great Synagogue of Trieste was built, in 1912, as the community reached 6,000 faithfuls, there was another Israeli temple, located in Cittavecchia.

The Jews of Triest founded in fact in 1798, a Major Temple in the former Piazzetta delle Scuole Israelitiche (today Via delle Beccherie, Questura area).
It was a beautiful building in Venetian style, designed by Francesco Balzano, an Italian originally from Nola (Naples), whose profession was Approved land-surveyor of public buildings [Agrimensore approvato per i pubblici Edifizi de’ Particolari] , who enrolled in the Order of Achitects in Trieste in 1801.
Silvio Rutteri describes it as a building with a mezzanine and two floors, with a facade decorated with high and narrow windows, framed by small pillars with arches.
A building reminiscent of the Serenissima, with a vaguely baroque style but far from the heaviness associated with this genre.
The temple had not been built from nothing, but rose from the foundations of a poor medieval building dating back to 1482.
In Piazza Vecchia the synagogue was connected to a nearby palace with two stone terraces closed with stained-glass windows; a bridge of union that reminded again Venice. The style – Lombardesque in the windows, Venetian in the pillars – was linked to the 17th century architecture of Palazzo Marenzi.
The peculiarity of the temple was how it actually housed two different synagogues: the ground floor and the first floor were in fact reserved for the Schola n. 3 or Spanish Schola with Sephardic rite; while the second and third floors welcomed Jews of German rite or Askenazite with the Schola n. 2 or Schola Grande.
They were not the only religious buildings in the area, because at the entrance of via delle Beccherie n. 19 there was the Schola n. 1 (1746) which housed the offices of the community and in via del Monte 3 the Schola Vivante (1828) by the family of shipowners from Trieste.
Did you know?: it was in this last synagogue that the marriage between Umberto Saba and Carolina Wolfler, called Lina, was celebrated.
The term Schola is not by chance, because the Temple also housed the language and religious schools.
The interior of the Schola had a marble tabernacle in the largest room, consisting of steps and columns, on which the ark of the law stood hosting the Pentateuch in parchment. Around the main hall there were galleries, reserved for women; while at the entrance there was the pulpit, from which the major rabbi preached.
In front of the main door it was also possible to admire two inscriptions, respectively in Hebrew and Latin, where the community remembered the visit of Emperor Francis I, which took place at the height of the Napoleonic wars (6 May 1816/Jewish year 5576).
It was no coincidence that the “most merciful emperor” had visited the Synagogue, because seven years earlier, on 30th April 1809, the Jewish community had gathered to pray for the victory of the Austrians against the French, who were engaged in the bloody clashes in Friuli at the time.
A fundamental step came in 1821, when Major Rabbi Abraham Eliezer Levi translated the form of prayers from Hebrew into Italian, marking a turning point in the history of the community: the aim was to reach the less educated faithful.
In the same year the Schola n. 1, the oldest, burned down in an accident, but it was rebuilt three years later thanks to a project by the architect Domenico Corti.
The tradition of imperial visits continued later in 1844, when the community welcomed Emperor Ferdinand I with his wife Maria Anna Carolina.
It is difficult to imagine then, both for the couple and for the Jewish community of Trieste, which storm would be unleashed only four years later, in 1848, with the Primavera dei Popoli.
The various Schole, as components of the (former) ghetto continued to work even in the twentieth century, although the great synagogue of 1912 had assumed a predominant role.
The position of the Major Temple in Piazza Vecchia, the antiquity ,of the building and the ghetto and the general scenography were the object of admiration by “strangers”; what today we would call a tourist attraction.
Rutteri writes in this regard that there was always a chair ready for the traveler who wanted to sketch a drawing of the place; nowadays one would shoot a selfie for Instagram.
Yet it was from this “graceful corner” that the destruction of Cittavecchia began between 1934 and 1937.
The “healing pickaxe” demolished all four synagogues and erased part of the city’s medieval and modern heritage.
Strange reasoning, that of a regime which, in order to bring to light the vestiges of a classical civilization, such as the Roman one, chose to destroy another, the medieval one.
In hindsight, a sign of the times to come.