The Changing Story of Cnut and the Waves 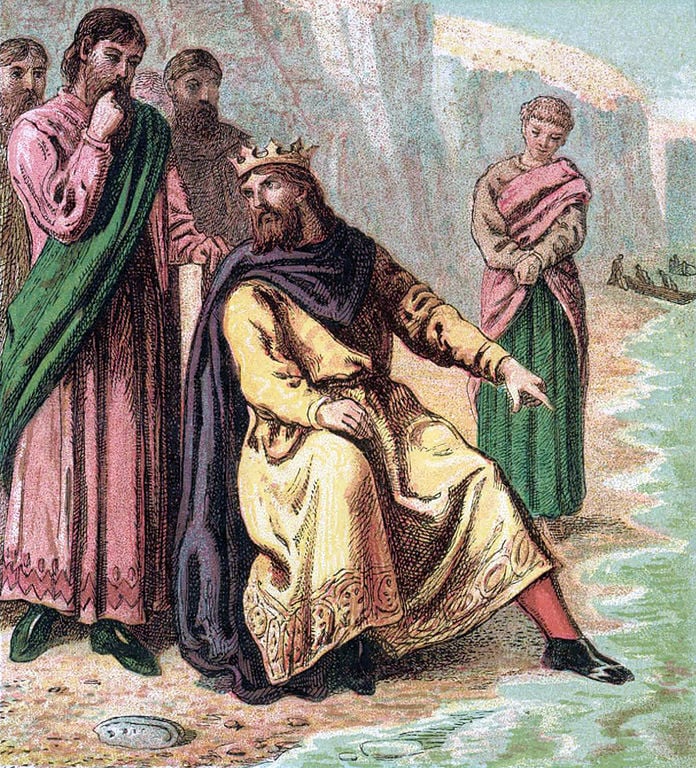 There is famous story about King Cnut and the waves. However, most people know do not know the original version.

Cnut was the ruler of England for 19 years – he conquered the country in 1016 after father Sweyn Forkbeard died (he had only ruled England for a few months), and later became also the King of Denmark and King of Norway. Most historians have found him to be a very capable ruler, with one even calling him “the most effective king in Anglo-Saxon history.”

For most people, what they might remember about this Cnut is a short story where the King goes to the seashore to order the waves from the incoming tide to stop.

The original version of  the story appears in the Historia Anglorum, by Henry, Archdeacon of Huntingdon, a twelfth-century chronicle covering the history of England from ancient times to the year 1154. In a section following his mention of Cnut’s death in 1035, Henry offers some words of praise for the king:

In addition to the many wars in which he was most particularly illustrious, he performed three fine and magnificent deeds. The first is that he gave his daughter in marriage to the Roman emperor, with indescribable riches. The second, that on his journey to Rome, he had the evil taxes that were levied on the road that goes through France, called tolls or passage tax, reduced by half at his own expense. The third, that when he was at the height of his ascendancy, he ordered his chair to be placed on the sea-shore as the tide was coming in. Then he said to the rising tide, “You are subject to me, as the land on which I am sitting is mine, and no one has resisted my overlordship with impunity. I command you, therefore, not to rise on to my land, nor to presume to wet the clothing or limbs of your master.” But the sea came up as usual, and disrespectfully drenched the king’s feet and shins. So jumping back, the king cried, “Let all the world know that the power of kings is empty and worthless, and there is no king worthy of the name save Him by whose will heaven, earth and sea obey eternal laws.” Thereafter King Cnut never wore the golden crown on his neck, but placed it on the image of the crucified Lord, in eternal praise of God the great king. By whose mercy may the soul of King Cnut enjoy rest.

Historians have been a little skeptical on whether this story really happened – Henry did write this work more than a century after Cnut’s reign, and no source closer to that period mentions anything like it. Still it proved to be a good enough tale of piety to be included in later medieval works.

The story was also included in The History of England, by the 18th century writer David Hume. This best-selling work, however, adds in new details to the story:

Canute, the greatest and most powerful monarch of his time, sovereign of Denmark and Norway, as well as of England, could not fail of meeting with adulation from his courtiers; a tribute which is literally paid even to the meanest and weakest princes. Some of his flatterers breaking out, one day, in admiration of his grandeur, exclaimed that every thing was possible for him: Upon which the monarch, it is said, ordered his chair to be set on the sea-shore, while the tide was rising, and as the waters approached, he commanded them to retire, and to obey the voice who was lord of the ocean. He feigned to sit some time in expectation of their submission; but when the sea still advanced towards him, and began to wash him with its billows, he turned to his courtiers, and remarked to them, that every creature in the universe was feeble and impotent, and that power resided with one Being alone, in whose hands were all the elements of nature; who could say to ocean, ‘Thus far shalt thou go, and no farther’; and who could level with his nod the most towering piles of human pride and ambition.

While the main narrative of the story remains the same, the reasons why Cnut did this have changed – while in Huntingdon’s account he is acknowledging the supremacy of God and his piety to Him, in Hume’s version he was doing this more to rebuke his own courtiers, who were praising him too much. One could argue that both versions of the story are good tales, with King Cnut being shown in a positive light. However, in the centuries since it has been Hume’s version that most people read about, and other authors have even added more embellishments to it, such as William J. Bennett, who provides this account in his 1993 work, The Book of Virtues:

Long ago, England was ruled by a king named Canute. Like many leaders and men of power, Canute was surrounded by people who were always praising him. Every time he walked into a room, the flattery began.

“You are the greatest man that ever lived,” one would say.

“O king, there can never be another as mighty as you,” another would insist.

“Your highness, there is nothing you cannot do,” someone would smile.

“Great Canute, you are the monarch of all,” another would sing. “Nothing in this world dares to disobey you.”

The king was a man of sense, and he grew tired of hearing such foolish speeches. One day he was walking by the seashore, and his officers and courtiers were with him, praising him as usual. Canute decided to teach them a lesson.

“So you say I am the greatest man in the world?” he asked them.

“O king,” they cried, “there never has been anyone as mighty as you, and there never will be anyone so great, ever again!”

“And you say all things obey me?” Canute asked.

“Absolutely!” they said. “The world bows before you, and gives you honour.”

“I see,” the king answered. “In that case, bring me my chair, and we will go down to the water.”

“At once, your majesty!” They scrambled to carry his royal chair over the sands. “Bring it closer to the sea,” Canute called. “Put it right here, right at the water’s edge.” He sat down and surveyed the ocean before him. “I notice the tide is coming in. Do you think it will stop if I give the command?”

His officers were puzzled, but they did not dare say no. “Give the order, O great king, and it will obey,” one of them assured him.

“Very well. Sea,” cried Canute, “I command you to come no further! Waves, stop your rolling! Surf, stop your pounding! Do not dare touch my feet!”

He waited a moment, quietly, and a tiny wave rushed up the sand and lapped at his feet. “How dare you!” Canute shouted. “Ocean, turn back now! I have ordered you to retreat before me, and now you must obey! Go back!”

And in answer another wave swept forward and curled around the king’s feet. The tide came in, just as it always did. The water rose higher and higher. It came up around the king’s chair, and wet not only his feet, but also his robe. His officers stood about him, alarmed, and wondering whether he was not mad.

“Well, my friends,” Canute said, “it seems I do not have quite so much power as you would have me believe. Perhaps you have learned something today. Perhaps now you will remember there is only one King who is all-powerful, and it is he who rules the sea, and holds the ocean in the hollow of his hand. I suggest you reserve your praises for him.”

The royal officers and courtiers hung their heads and looked foolish. And some say Canute took off his crown soon afterward, and never wore it again.

The story has also been illustrated several times, and one can see that in every scene we have the courtiers on hand for their rebuking: You can read more about the Anglo-Saxon ruler in Susan Abernethy’s article, Cnut: England’s Danish King. Henry of Huntingdon’s Historia Anglorum was edited and translated by Diane Greenway for Oxford University Press in 1996 – click here to see the book on Amazon.com