The Biography of the Day: François Couperin

François Couperin (French: [fʁɑ̃swa kupʁɛ̃]; 10 November 1668 – 11 September 1733[1]) was a French Baroque composer, organist and harpsichordist. He was known as Couperin le Grand ("Couperin the Great") to distinguish him from other members of the musically talented Couperin family. 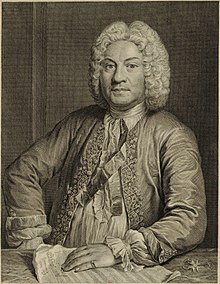 Couperin was born into a prominent musical family. His father Charles was organist at the Church of Saint-Gervais in Paris, a position previously held by Charles's brother Louis Couperin, the esteemed keyboard virtuoso and composer whose career was cut short by an early death. As a boy François must have received his first music lessons from his father, but Charles died in 1679. The church council at Saint-Gervais hired Michel Richard Delalande to serve as new organist on the understanding that François would replace him at age 18.

The 11-year-old was taken care of and taught, meanwhile, by organist Jacques-Denis Thomelin, who served both at court and at the church of St Jacques-de-la-Boucherie. Biographer Évrard Titon du Tillet wrote that Thomelin treated the boy extremely well, becoming a second father to him. François' talent must have shown itself early on because by 1685 the church council began providing him a salary, although he had no contract.

At twenty-one Couperin also lost his mother, Marie (née Guérin), but otherwise his life and career were accompanied by good fortune. In 1689 he married one Marie-Anne Ansault, daughter of a prosperous family. The next year saw the publication of his Pièces d'orgue, a collection of organ masses praised by Delalande, who may have assisted with the project. In three more years Couperin succeeded Thomelin at Louis XIV's court. The appointment brought him in touch with some of the finest composers of the day as well as the aristocracy. His earliest chamber music dates from this time. Couperin met his court duties in tandem with those he now had as organist at Saint-Gervais, while also composing.

He obtained a 20-year royal privilege to publish in 1713 and used it immediately to issue the first volume (out of four) of his harpsichord works, Pieces de clavecin. A harpsichord playing manual followed in 1716, as well as other collections of keyboard and chamber music. In 1717 Couperin succeeded one of his most eminent colleagues, Jean-Henri d'Anglebert, as ordinaire de la musique de la chambre du roi pour le clavecin, one of the highest possible appointments for a court musician. However, his involvement in the musical activities at the court may have lessened after Louis XIV's death in 1715.

Couperin's health declined steadily throughout the 1720s. The services of a cousin were required by 1723 at Saint Gervais, and in 1730 Couperin's position as court harpsichordist was taken up by his daughter Marguerite-Antoinette. Couperin's final publications were Pièces de violes (1728) and the fourth volume of harpsichord pieces (1730). The composer died in 1733. The building where Couperin and his family lived since 1724 still stands and is located at the corner of the rue Radziwill and the rue des Petits Champs. The composer was survived by at least three of his children: Marguerite-Antoinette, who continued working as court harpsichordist until 1741, Marie-Madeleine (Marie-Cécile), who became a nun and may have worked as organist at the Maubuisson Abbey, and François-Laurent, who according to contemporary sources left the family after François died.

Couperin acknowledged his debt to the Italian composer Corelli. He introduced Corelli's trio sonata form to France. Couperin's grand trio sonata was subtitled Le Parnasse, ou L'apothéose de Corelli ("Parnassus, or the Apotheosis of Corelli"). In it he blended the Italian and French styles of music in a set of pieces which he called Les goûts réunis ("Styles Reunited").

His most famous book, L'art de toucher le clavecin ("The Art of Harpsichord Playing", published in 1716), contains suggestions for fingerings, touch, ornamentation and other features of keyboard technique.

Couperin's four volumes of harpsichord music, published in Paris in 1713, 1717, 1722, and 1730, contain over 230 individual pieces, and he also published a book of Concerts Royaux which can be played as solo harpsichord pieces or as small chamber works. The four collections for harpsichord alone are grouped into ordres, a synonym of suites, containing traditional dances as well as pieces with descriptive titles. They are notable for Couperin's detailed indication of ornaments, which in most harpsichord music of the period was left to the discretion of the player. The first and last pieces in an ordre were of the same tonality, but the middle pieces could be in other closely related tonalities. These volumes were admired by Johann Sebastian Bach, who exchanged letters with Couperin, and later by Brahms and by Ravel, who memorialized their composer in Le tombeau de Couperin (Couperin's Memorial).

Many of Couperin's keyboard pieces have evocative, picturesque titles (such as "The little windmills" and "The mysterious barricades") and express a mood through key choices, adventurous harmonies and (resolved) discords. They have been likened to miniature tone poems. These features attracted Richard Strauss, who orchestrated some of them.

Johannes Brahms's piano music was influenced by the keyboard music of Couperin. Brahms performed Couperin's music in public and contributed to the first complete edition of Couperin's Pièces de clavecin by Friedrich Chrysander in the 1880s.

The early-music expert Jordi Savall has written that Couperin was the "poet musician par excellence", who believed in "the ability of Music [with a capital M] to express itself in prose and poetry", and that "if we enter into the poetry of music we discover that it carries grace that is more beautiful than beauty itself".[2]

Only one collection of organ music by Couperin survives, the Pièces d'orgue consistantes en deux messes ("Pieces for Organ Consisting of Two Masses"), the first manuscript of which appeared around 1689–1690.[3][4] At the age of 21, Couperin probably had neither the funds nor the reputation to obtain widespread publication, but the work was approved by his teacher, Michel Richard Delalande, who wrote that the music was "very beautiful and worthy of being given to the public."[5] The two masses were intended for different audiences: the first for parishes or secular churches ("paroisses pour les fêtes solemnelles"), and the second for convents or abbey churches ("couvents de religieux et religieuses"). These masses are divided into many movements in accordance with the traditional structure of the Latin Mass: Kyrie (5 movements), Gloria (9), Sanctus (3), Agnus (2), and an additional Offertoire and Deo gratias to conclude each mass.

Couperin followed techniques used in masses by Nivers, Lebègue, and Boyvin, as well as other predecessors of the French Baroque era. In the paroisses Mass, he uses plainchant from the Missa cunctipotens genitor Deus as a cantus firmus in two Kyrie movements and in the first Sanctus movement; the Kyrie Fugue subject is also derived from a chant incipit. The Mass for couvents contains no plainchant, as each convent and monastery maintained its own, non-standard body of chant. Couperin departs from his predecessors in many ways. For example, the melodies of the Récits are strictly rhythmic and more directional than previous examples of the genre. Willi Apel wrote, "this music shows a sense of natural order, a vitality, and an immediacy of feeling that breaks into French organ music like a fresh wind."[6]

The longest piece in the collection is the Offertoire sur les grands jeux of the first Mass, which is akin to an expanded French overture in three large sections: a prelude, a chromatic fugue in minor, and a gigue-like fugue. Bruce Gustafson has called the movement a "stunning masterpiece of the French classic repertory."[7] The second Mass also contains an Offertoire with a similar form, but this Mass is not considered as masterly as the first: Apel wrote, "In general, [Couperin] did not expend the same care for this Mass, which was written for modest abbey churches, as for the other one, which he himself certainly presented on important holidays on the organ of Saint-Gervais."

L’Art de Toucher le Clavecin (1716), a didactic treatise that includes eight Préludes and an Allemande amounting to about 14 minutes of music.

Leçons de ténèbres (1714)
These are all for Wednesday. Couperin did not write for the Thursday or Friday light-dimming offices.

Thinking of Baroque music our minds turn nearly automatically to the German giants Bach, Handel, Telemann and the like, or to sunnier parts in Italy where Vivaldi, Corelli and Albinoni wrote their concertos: but one nearly forgets that also in France great music was composed in the Baroque! One of the most important composers was Francois Couperin (1668-1733), imperial court composer of the most charming, graceful music: look at the French pictures of that time and you can imagine what kind of music.

As a motto for this set may serve a quotation from one of the pieces by Couperin himself: “One should not attach too much attention to the precise measure of this piece, but one should sacrifice everything to good taste.”