Tales from the Hundred Years’ War: Christmas in the Count’s Court 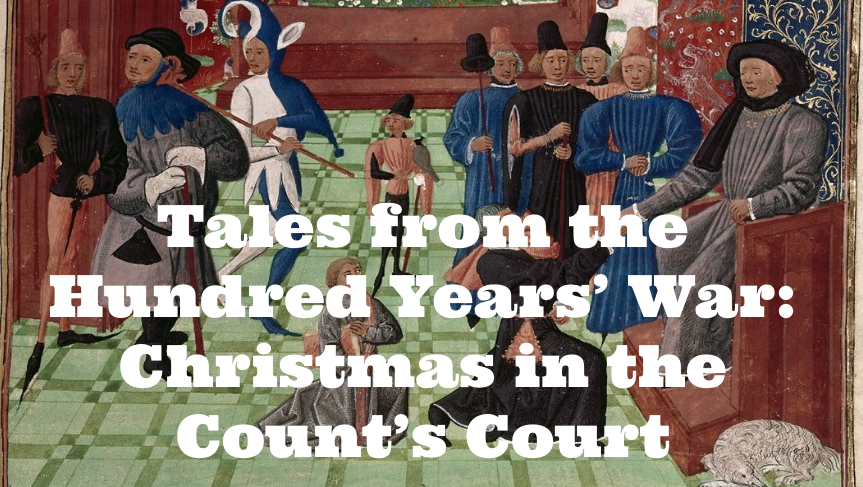 The Hundred Years War was a huge historical event which compelled some participants to record their experiences, heroic and horrible. How did those individual experiences get passed down?  In the case of men at arms we might answer “gossip.” We know that warriors gathered in taverns, courts or camps, spreading their stories around by word of mouth, until some would-be literary man wrote them down.  A surprising number survive, and they get us as close to warriors’ experience as we are likely to get.

Elsewhere I argued that the stories collected by Froissart and other chroniclers during the Hundred Years War started out as “gossip,” tales originally told by people who had direct experience of battlefields, sieges, and war camps.  But the really good stories were written by men who had a talent for buttering up the men-at-arms. Froissart does not seem to have fought, if he fought at all. Rather he made himself welcome in the places where the warriors and the princes gathered, and opened up his ears.

Froissart put himself in a strategic position to collect gossip in 1388, when he visited the court of the Count of Foix, Gaston Phoebus.  This lord was one of the richest nobles in the south of France, and was in a position to avoid fighting against France or England, while maintaining his predominance over many of his neighboring lords.  As a result the court of Foix was an oasis of peace for men at arms from all over. Froissart shows himself talking and drinking and filing away stories for future use.

The Christmas feasts were some of the favorite times for travelers and friends to gather.  Froissart says:

At the feasts of Christmas, which he kept with great solemnity, crowds of knights and squires from Gascony waited on him, to all of whom he gave splendid entertainments. I saw there Ernauton d’Espaign, of whose surprising strength Sir Espaign du Lyon had told me, which made me more desirous to see him, and the count showed him many civilities. I saw also knights from Aragon and England; which last were of the household of the duke of Lancaster, who at that time resided at Bordeaux, whom the count received very graciously, and presented with handsome gifts. I made acquaintance with these knights, and by them was informed of several things which had happened in Castille, Navarre, and Portugal.

Froissart was happy to hear from Sir Espaign du Lyon a story of an extraordinary feat performed at an earlier Christmas gathering.

“Three years ago, I [sir Espaign du Lyon] saw him [Ernauton] play a ridiculous trick, which I will relate to you. On Christmas-day, when the count de Foix was celebrating the feast with numbers of knights and squires, as is customary, the weather was piercing cold, and the count had dined, with many lords, in the hall. After dinner he rose and went into a gallery, which has a large staircase of twenty-four steps: in this gallery is a chimney where there is a fire kept when the count inhabits it, otherwise not; and the fire is never great, for he does not like it: it is not for want of blocks of wood, for Béarn is covered with wood in plenty to warm him if he had chosen it, but he has accustomed himself to a small fire.

“When in the gallery he thought the fire too small, for it was freezing and the weather very sharp; and said to the knights around him, ‘Here is but a small fire for this weather.’ Ernauton d’Espaign instantly ran down stairs; for from the windows of the gallery, which looked into the court, he had seen a number of asses laden with billets of wood for the use of the house, and seizing the largest of these asses, with his load, threw him over his shoulders, and carried him upstairs, pushing through the crowd of knights and squires who were around the chimney, and flung ass and load, with his feet upwards, on the dogs of the hearth, to the delight of the count, and the astonishment of all, at the strength of the squire, who had carried, with such ease, so great a load up so many steps.”

Sheer physical power could attract the attention of lords and companions.  As Sir Espaign added:

“You will not find his equal in all Gascony for vigour of body: it is for thus the count de Foix esteems him as his brother in arms.”

Steven Muhlberger, before his recent retirement from Nipissing University, studied and taught Late Antiquity, the history of democracy, Islamic history, and chivalry. His most recent scholarly works include the “Deeds of Arms Series” published by Freelance Academy Press.