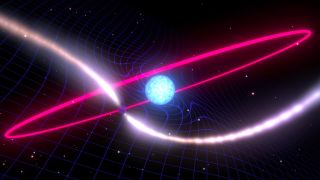 The way the fabric of space and time swirls in a cosmic whirlpool around a dead star has confirmed yet another prediction from Einstein's theory of general relativity, a new study finds.

That prediction is a phenomenon known as frame dragging, or the Lense-Thirring effect. It states that space-time will churn around a massive, rotating body. For example, imagine Earth were submerged in honey. As the planet rotated, the honey around it would swirl — and the same holds true with space-time.


Satellite experiments have detected frame dragging in the gravitational field of rotating Earth, but the effect is extraordinarily small and, therefore, has been challenging to measure. Objects with greater masses and more powerful gravitational fields, such as white dwarfs and neutron stars, offer better chances to see this phenomenon.

Scientists focused on PSR J1141-6545, a young pulsar about 1.27 times the mass of the sun. The pulsar is located 10,000 to 25,000 light-years from Earth in the constellation Musca (the fly), which is near the famous Southern Cross constellation.

A pulsar is a fast-spinning neutron star that emits radio waves along its magnetic poles. (Neutron stars are corpses of stars that died in catastrophic explosions known as supernovas; the gravity of these remnants is powerful enough to crush protons together with electrons to form neutrons.)

PSR J1141-6545 circles a white dwarf with a mass about the same as the sun's. White dwarfs are the superdense Earth-size cores of dead stars that are left behind after average-size stars have exhausted their fuel and shed their outer layers. Our sun will end up as a white dwarf one day, as will more than 90% of all stars in our galaxy.

The pulsar orbits the white dwarf in a tight, fast orbit less than 5 hours long, hurtling through space at about 620,000 mph (1 million km/h), with a maximum separation between the stars barely larger than the size of our sun, study lead author Vivek Venkatraman Krishnan, an astrophysicist at the Max Planck Institute for Radio Astronomy in Bonn, Germany, told Space.com.

The researchers measured when pulses from the pulsar arrived at Earth to an accuracy within 100 microseconds over a period of nearly 20 years, using the Parkes and UTMOST radio telescopes in Australia. This allowed them to detect a long-term drift in the way the pulsar and white dwarf orbit each other.

After eliminating other possible causes of this drift, the scientists concluded that it was the result of frame dragging: The way the rapidly spinning white dwarf pulls on space-time has caused the pulsar's orbit to change its orientation slowly over time. Based on the level of frame dragging, the researchers calculated that the white dwarf whirls on its axis about 30 times an hour.

"Systems like PSR J1141-6545, where the pulsar is younger than the white dwarf, are quite rare," Venkatraman Krishnan said. The new study "confirms a long-standing hypothesis of how this binary system came to be, something that was proposed over two decades ago."

The researchers noted that they used frame dragging to yield insight into the rotating star that caused it. In the future, they said, they can use a similar method to analyze binary neutron stars to learn more about their internal composition, "which, even after more than 50 years of observing them, we do not yet have a handle on," Venkatraman Krishnan said. "The density of matter inside a neutron star far exceeds what can be achieved in a lab, so there is a wealth of new physics to be learnt by using this technique to double neutron-star systems."

The scientists detailed their findings online Thursday (Jan. 30) in the journal Science.