POZNAŃ, JUNE 1956 THE 64TH ANNIVERSARY OF THE WORKERS’ PROTESTS BROKE OUT IN POZNAŃ

On 28 and 29 June 1956, workers’ protests broke out in Poznań, and subsequently turned into street fighting. The army was deployed by the Communist authorities to crush the unrest. At least 79 lives were lost as a result, and more than 600 people were wounded.

The June 1956 protest of the Poznań workers was triggered by widespread discontent with the situation across the country and in the region. 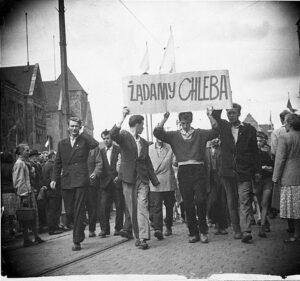 Communist authorities had allocated fewer funds for investments in Poznań and the Wielkopolska region, citing the need to support more disadvantaged regions.

Average pay in Poznań was 8 percent lower than the national median. Housing shortages were a major problem. The long-established tradition of dissent and protest in the region – dating back not just to the interwar period but to the 19th century, when Poland was under partitions – was another factor influencing the workers of Poznań. Equally significant was the fact that the majority of those who worked in Poznań’s industrial plants were born and raised there.

The immediate cause of the June disturbances had been the protracted conflict at the Stalin Plant (previously named for Hipolit Cegielski), which employed approximately 13,000 people. The staff demanded a refund of a miscalculated bonus tax, the lowering of exceptionally high production norms, and improving both health and safety and work organization, to dispense with periods of inactivity, which often went on for many hours. Other demands included pay raises and price reductions. Workers issued a cautionary strike threat. 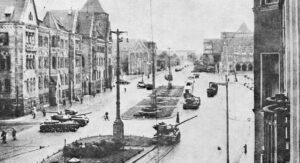 Amid mounting frustration, workers chose their representatives; this delegation departed for Warsaw in the early morning of 26 June, with a view to holding talks at the Ministry of Metal Industry and the Board of Directors of the Metal Workers’ Trade Union. During his talks with representatives of Poznań workers, Minister Roman Figielski agreed to a number of their demands. Yet, during his visit to the Stalin Plant on 27 June, Figielski failed to confirm his earlier declarations in front of the staff. This caused an outcry among the workers.

Early on 28 June, workers announced that they were mounting industrial actions, and marched in the direction of the City National Council, located at the time on Adam Mickiewicz Square (known as Stalin Square in that period). As the march went on, the Cegielski plant workers were joined by colleagues from other plants. Józef Wielgosz, who witnessed these events, remembered them as follows:

Images of this remarkable and uncanny march are still quite vivid in the memory of many local people. One of these images was this: at the time, all manual workers wore wooden footwear, known as kujony or okulaki [regional terms for workers’ footwear]. This was why the march could be heard from a distance: one could hear the hollow clatter of the wooden shoes on the cobblestones. The scene brought to mind a forced-labor camp. The racketty clatter, the hard, determined faces, clenched fists and poor workers’ clothes complemented the picture, straight out of the time of German and Soviet occupation, which had been so tragic for Poland. Women who worked backbreaking tasks at the factories headed the march. Passersby in the streets, women in particular, cried when they saw them. Nothing but the truth took to the streets, to show its true nature to the city. 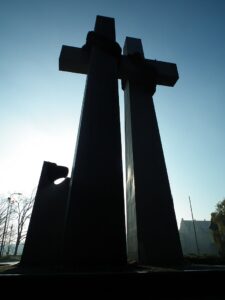 The national anthem, Rota – a famous patriotic hymn – and religious hymns were sung. Tens of thousands gathered outside the City National Council and the Provincial Polish United Workers’ Party Committee. Some demonstrators entered the buildings, throwing red flags out onto the street, defacing busts and portraits of Soviet and Polish leaders. In addition, some demonstrators entered the headquarters of the Milicja Obywatelska, the police of the People’s Republic.

After rumors began to spread of the arrest of the delegates who had held negotiations in Warsaw in the names of their fellow workers, a group of demonstrators headed for the prison on Młyńska Street, climbed the walls and opened the prison gates. The guards did not offer resistance. More than 250 prisoners were released, and weapons were taken from the prison armory. Other demonstrators stormed the building of the district court and prosecution office, which was adjacent to the prison. The documentation they threw out of the windows was burned in the street.  Some protesters relocated onto the premises of the International Poznań Trade Fair. The first shots fired that day in Poznań were in Kochanowskiego Street, before the seat of the Provincial Office for Public Security (WUBP).  The crowd besieged the WUBP building around midday. There were fatalities and wounded: witnesses said that shots were being fired at women and children from WUBP headquarters. 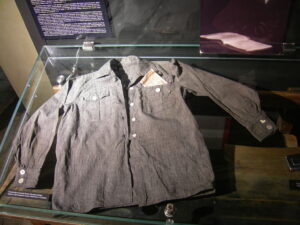 According to Paulina Codogni, the author of 1956, it was most likely at that point that:

thirteen-year-old Romek Strzałkowski, later regarded as one of the symbols of the June 1956 events in Poznań, entered the scene. The wounded tram conductors were carrying a flag which Romek took over. Witnesses say that the body of the same boy was found several hours later among the garages of the Public Security Office. He was seated and tied to a chair.  The circumstances of his death remain unclear: it is impossible to say for sure whether he was deliberately murdered, or killed by a stray bullet – but the available facts and information speak overwhelmingly in favour of the former version.

Fierce fighting around WUBP escalated: shots were being fired in both directions. A company from the Officers’ School of Armoured Troops, which had been sent to the rescue of the security service officers, was disarmed. Violent clashes were also taking place in other parts of the city. In the circumstances, the Politburo of the PZPR Central Committee approved the decision to pacify the city by deploying the military. The deputy defence minister, Gen. Stanisław Popławski, was in command of the action. In addition, a delegation of party and government officials was sent to Poznań from Warsaw. Józef Cyrankiewicz, Wiktor Kłosiewicz and Stanisław Morawski were among the delegates. 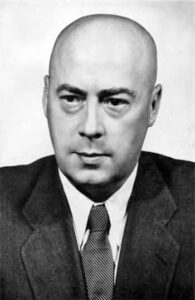 Around 2 pm on 28 June 1956, having arrived in Poznań by air, General Popławski gave an order to bring the situation in the vicinity of WUBP under control. The 19th Armored Division of the Silesian Military District entered the city center approximately two hours later. In the evening, it was joined by units of the 10th Sudeten Armored Division and the 4th and 5th Infantry Divisions. The troops sent to Poznań were told by their superiors they would be suppressing unrest triggered by agents of West Germany.

More than 10,000 troops, 359 tanks, 31 assault guns and almost 900 vehicles and motorcycles were concentrated in Poznań at the time. Security service and Milicja Obywatelska officers and KBW troops took part in the bloody pacification of the city alongside the military. As the clashes went on, several dozen tanks were destroyed or damaged by the local fighters. The last of the fighting came to an end on the morning of 30 June. The outcome was tragic: at least 79 people were killed, and more than 600 were wounded. Five troops of the Polish Army, a soldier of the Internal Security Corpus (KBW), three Public Security Office employees and one milicja officer were also killed. 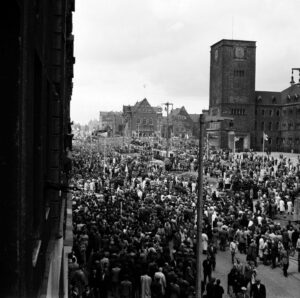 Mass arrests began in Poznań as early as on 28 June. Public security and milicja officers harassed the suspects accused of taking part in the clashes, abusing them physically and mentally. More than 700 detainees were transferred to the interrogation point established at the Ławica airfield; approximately 300 of them were arrested on suspicion of assault or robbery.

The events of June 1956 in Poznań had been the first instance of a mass workers’ protest against the Communist authorities in Poland. The protest played a significant role in precipitating the political and economic changes in the Polish People’s Republic.