'One in a million' yellow cardinal spotted in Alabama 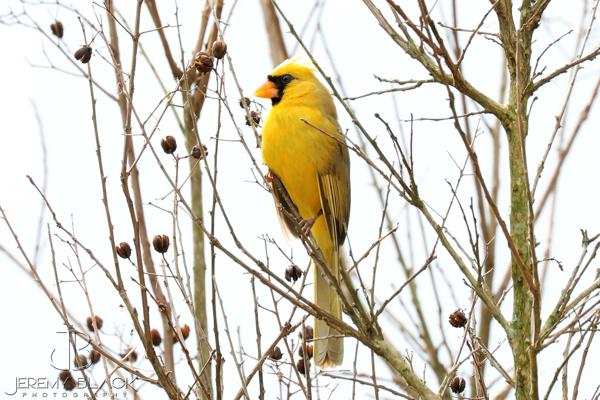 Auburn University researchers say this cardinal is yellow due to a rare genetic mutation. It's been photographed around Alabaster, Alabama in February 2018.(Jeremy Black Photography)

An extremely rare cardinal has birders and biologists flocking to Shelby County, Alabama this week, as images of a yellow cardinal have circulated around social media.

Auburn University biology professor Geoffrey Hill said the cardinal in the photos is an adult male in the same species as the common red cardinal, but carries a genetic mutation that causes what would normally be brilliant red feathers to be bright yellow instead.

Alabaster resident Charlie Stephenson first noticed the unusual bird at her backyard feeder in late January and posted about it on Facebook. She said she's been birding for decades but it took her some time to figure out what she was seeing.

"I thought 'well there's a bird I've never seen before'," Stephenson said. "Then I realized it was a cardinal, and it was a yellow cardinal."

Stephenson said she would not give out her address or specific location due to fears that people would flock in to get a look at the bird, but said she lives near the new Thompson High School in Alabaster. She shot some video of the bird, embedded below.

The yellow cardinal is still around, she said.

"Every time I watch the bird feeder, I can see him," she said. "The cardinals in my back yard typically come in the morning and again in the evening and I can only bird-watch on weekends until the time changes, but on weekends, I'll sit there and watch for him.

"Every time we've looked for him, he'll show up at least once that day."

Jeremy Black, a professional photographer who is friends with Stephenson, saw the posting and asked if he could come to her backyard and try to photograph the bird.

On Feb. 19, after about five hours of quiet waiting, Black was able to capture the images he provided here to AL.com.

"As soon as I saw it on her social media, I was kind of curious and I wanted to go explore and see if I could find it," Black said. "I finally saw it after about five hours.

"I started out sitting in her backyard hoping that maybe I would see it. A lot of cardinals came by and none of them were yellow, so I decided to be a little bit more evasive and hide on her screened-in porch. About two or three hours after I moved to the porch, it finally showed up."

'One in a million mutation'

Hill -- who has literally written books on bird coloration -- said the mutation is rare enough that even he, as a bird curator and researcher has never seen one in person.

"I've been birdwatching in the range of cardinals for 40 years and I've never seen a yellow bird in the wild," Hill said. "I would estimate that in any given year there are two or three yellow cardinals at backyard feeding stations somewhere in the U.S. or Canada.

"There are probably a million bird feeding stations in that area so very very roughly, yellow cardinals are a one in a million mutation." 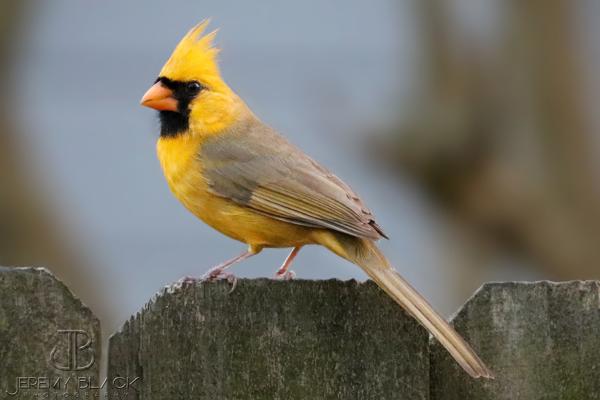 Photo of a yellow cardinal on a fence post in Alabama, Ala. The bird has a genetic mutation that causes its feathers to be yellow instead of red.

Hill said that cardinals and other songbirds need to consume substances called carotenoids (found in sweet potatoes and carrots) from the environment around them to achieve their bright colors.

Hill was part of the research team that identified the enzyme -- called CYP2J19 -- that, for most cardinals, converts all that yellow pigment into red feathers.

Why are some birds red? An Auburn University professor has the answer

Why are some birds red? "It's a very basic question," say Auburn University Professor Geoffrey Hill.

Hill is on sabbatical in Australia this semester -- he responded to AL.com's questions via email -- but said he would love to get some DNA from the yellow cardinal (via feathers) to perform more tests and pinpoint the mutation that changed the bird's color.

Stephenson said she hadn't realized how rare the bird was when she saw it back in January.

"I'm used to being a birder and you see some leukocytic ones, you see some albino ones," she said. "But I thought this was something else and then I learned how rare it is."

Black, meanwhile, is hoping to capture more images of the bird while it's in Shelby County. He's a full-time photographer who does some wildlife work amongst portraits and weddings.

"I'm trying to get a unique photograph and that is the yellow cardinal next to a traditional North American red cardinal," Black said. "My current goal is to try and visit her backyard or neighborhood as frequently as possible and see if I can get that shot with both birds together."

*UPDATED at 12:16 p.m. with comments from Stephenson and video added.