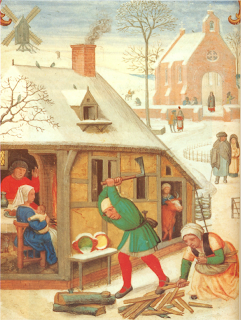 http://lucmedievalgarden.blogspot.ro/2012/01/medieval-winter.html
I recently acquired a book entitled A Medieval Book of Season. Can you tell what it is about? While reading the Chapter entitled “Winter,” I thought it would be very a propos to write a something on the way winter would have beenlived if we lived in Northern Europe about 700-800 years ago. This is all from A Medieval Book of Seasons by Marie Collins and Virginia Davis (1), with a little bit of supplemental information from Daily Life in Medieval Times by Francis and Joseph Gies (2). Enjoy!

A lot has changed in the past half a dozen or so centuries. We here in Chicago have heating and food aplenty for one. We no longer rely on the seasons to give us one produce over another or to keep us warm. Technology has launched us into a time where we (as Americans and not even all Americans for that) are not subject to the ill-wills of winter. One thing that has not changed, however, is the season’s effects on our mind. For all of our technological advances it is still cold, the trees are still bereft of leaves, and it is still dark at 5pm. Depressing! There is Middle English lyric that highlights the winter blues we find ourselves so often succumbing to. It goes:


“Winter awakens all my sorrow, now that the leafy branches are growing bare; often I sigh and sorrowfully mourn when I consider how all this world’s joy comes to nothing.” 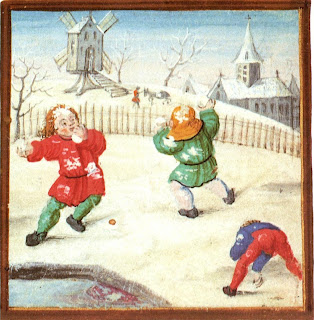 Back then there was no heating and drafty stone castles were not a huge improvement over mud and daub houses. Winter was not a great time for anyone, but it was especially bad for the poor (as it is now). Proper clothing and enough fuel would be important concerns, but none were so important as food. “Pottage” was the main staple for the poor, a mixture of whatever veggies and herbs were at hand, including onions, peas, beans, leeks, colewort, lentils and plenty of herbs. Parsley was a particularly important herb in pottage. These peasants would have gotten these from a garden that everyone would keep year round to supplement grains and relatively scarce meats, much like our garden here at Loyola! Apart from that, anyone’s winter diet would be heavily salted, as that was the only way to preserve meat, cheese, and butter, which would be present in the house of a lord or a well to do peasant. It was also a time of feasts. The celebration of Christmas emphasized the rich and poor celebrating together. The lord would often provide a feast for his subjects, the poor making off with as much food as their status prescribed. Some well to do peasants would get a full meal with no strings attached, whereas lower status peasants would have to provide their own fuel, clothe, and utensils for their more limited meal. The book Secretum Secretorum (the Secret of Secrets), a translation of a 10th century Arabic text on all sorts of topics including medicine, advised to switch to hot foods in winter, to counteract the "phlegmy humour” of winter. The foods the Secretum prescribes include “pigeons, mutton, and other roasts, fatty foods, figs, nuts, fine red wines, and hot potions.” That doesn’t sound so bad! 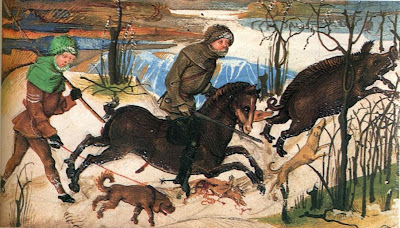 Yes, fun, what about fun? While this was probably the closest people would come to death all year, it would also include the longest holiday of the year… Christmas! Christmas lasted 12 days and no one worked at all, even villeins (serfs bound to work a set number of days on their lords’ lands) were exempt from work. Yes that is right, medieval serfs had a longer vacation than we do, from Christmas Eve to Epiphany (January 6th). At this point,it was considered too cold to till the earth for quite some time, but there was still plenty of work to be done on the serf’s own land and on that of his lord, but Christmas time was an exception. It was a time of great merriment, like today, and houses would be decorated with greenery to remind themselves of the coming resurgence life of the New Year and gifts would be exchanged. Winter activities included ice skating, which enjoyed by both adults and children using pieces of bone or polished wood, the playing of backgammon and chess, two very old and very popular games, hunting boar (for nobility only), as well as the timeless fun of pelting your best pal in the face with packed snow. In fact, people might have had a little too much fun back then, as according to Joseph and Francis Gies, lords would actually hire extra watchmen during the Christmas season! The holiday that marked the end of this period in the medieval calendar was Candlemas (February 2), when it was presumed to be warm enough to begin tilling again. Thus the medieval claendar year ended and began again. 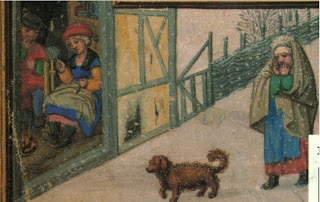 I hope that this was informative and helpful. Please post any questions or comments you might have to add to or improve on my blog! Stay tuned for future updates on the Loyola’s yellow Labyrinth and a special sneak peek into the work of my intern colleague on a surprising addition to the garden. Stay warm!