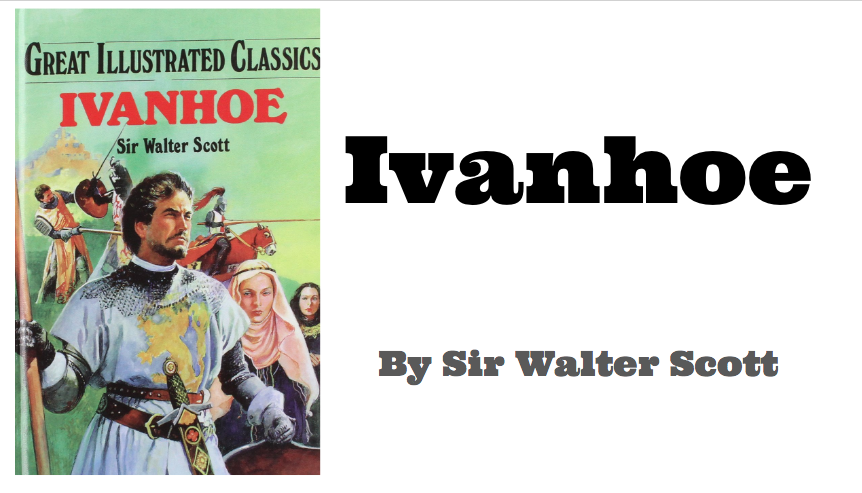 This is the book everyone knows. It’s given us a lot of the way we see the Middle Ages and it’s given writers many tools for writing historical fiction. Some of the tools have changed over time and some aren’t used much these days at all, but so much of this novel is so much a part of us that it’s very hard to talk about historical fiction or the Middle Ages without examining what Ivanhoe does and how it does it. That would take three volumes of five hundred pages, however, and all I have is one column. Instead of a complete analysis, then, I’ll give you some thoughts about one aspect.

I don’t want to make the choice of one aspect. Every page I read sends me rampaging around my lounge room, arguing with the author. He doesn’t argue back, but he makes the reasons for most of his historical choices clear in the introduction to the book. He points out very clearly that it’s fiction and it’s fun and it’s not Dryasdust and scholarly. His social agendas are clearly expressed (anti-French, very mixed feelings about things Jewish) and his understanding of England monetary history is somewhere around the level of zero. This fascinates me because there has to be a reason behind him not understanding that the medieval names for English coins were…. the same as the names of his own time. Their values were different and gold coins were a rarity. He has gold coins from the Mediterranean as standard coin and… other things. His idea of money is odd. I may come back to monetary systems another day, using another book.

Even deciding on just one aspect of Ivanhoe is so difficult.

There is, however, one thing that is immensely important to how most of us see the Middle Ages, to how England sees itself (especially in this time of Brexit) and to a whole raft of modern historical discussion. This is what I shall talk about, even though I’m torn by Scott’s interpretation of Robin Hood and by his fascinating view of sumptuary laws, and of the clothes he was positive local English Jews wore and … too many things. (As an aside, for the historical record, I am wearing my work clothes today, which is my garb for the times when I write in the home and want people to quake when they interrupt me. It’s a t-shirt dress that says clearly “Do Not Disturb.” Since I am Jewish, I think that Scott would rewrite this simple cotton garment as exotic and Eastern and possibly trimmed with fur.)

Right near the beginning of Ivanhoe, Scott gives a description of the Norman in England and the Saxon. His description sets the Normans in England up very clearly as the evil colonisers and Anglo-Norman as the imposed language of colonisers.

What struck me about this, at first, was that Scott had so little idea of how a multilingual society worked. He used some of the languages in the right places (I suspect influenced by sources) but the interactions between them – the reason English ended up with words from this language for this topic and that for another – he misses. Or almost misses. It’s there and it’s not there. It’s there and it’s misinterpreted.

The reason he interprets it in the way he does is because he was working from a basis of a perfect England speaking English – his England was monolingual not multilingual. He also applies this colonialist undertow to his cultural descriptions. 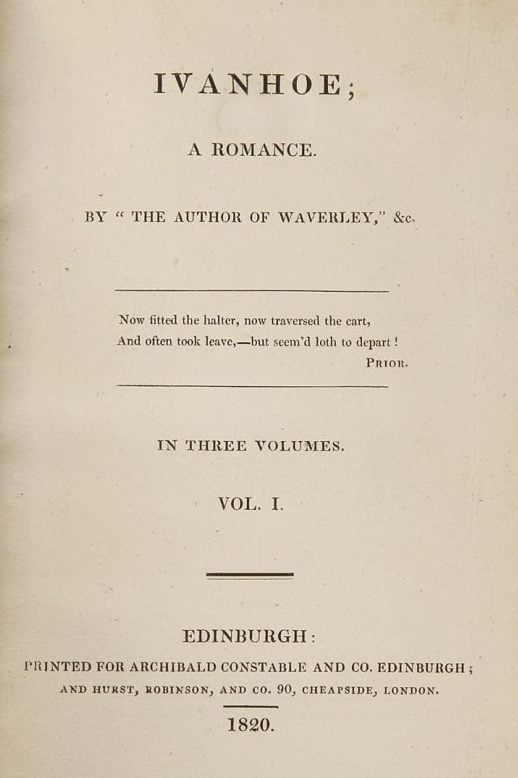 What’s particularly interesting about this is not the actual history he’s depicting. It’s that many, many people still cherish this style of interpretation of Medieval England. I encountered it in a library at Nottingham once, and by a group of medieval re-enactors who didn’t understand the cultural fusion of the period they were enacting. Regia Anglorum gets past this problem by relying on clear sources for each aspect of their re-enactment – it reduces the interpretative element significantly and the England they interpret is quite different from Scott’s Middle Ages for it is more closely linked to evidence rather than to  extrapolation. Mostly, however, I see this interpretation of English origins in books. So many books.

The colonised in this early description (a serf and a fool – neither free and both critical movers in the later plot) are described as wearing ‘primeval vestments’ and one of them doesn’t even comb his hair. This approach to peasants and serfs can be seen in pictures from the nineteenth century. English origins in picture. So many pictures. Most of them patronising.

This depiction is far enough away from us in time that we can instantly envisage the research issues Scott faced and how they might lead to such a radical misinterpretation of everyday life. A great deal of our knowledge of peasants and serfs comes from archaeological records and administrative records. A great deal of our knowledge about court entertainers comes from court records: Scott’s fool was simply wrong.

Where Scott didn’t know (whether it was because he couldn’t due to the current research about the Middle Ages or because he didn’t think to question the right type of record) he invented along very careful lines.

What models were the Anglo-Saxon thralls taken from? The physical descriptions early on fit some descriptions of slaves in other literature of the time. This makes sense. There were important contemporary issues during Scott’s lifetime relating to the abolition of slavery. Why don’t thralls comb their hair? For the same reason as Scott depicts Jews as problematic. In Ivanhoe he says that the greed in Jewish culture is due to mistreatment of Jews by the wider society. This implies that the lack of care for self in the slave-equivalent is, again, due to abuse by their owners.

I have seen argued in early nineteenth century debate on slavery that freedom was necessary, not because humans were equal, but because lesser humans need to be treated with dignity. This is a very colonialist view in some ways, and a very Christian view in others, but it certainly ties together the treatment of serfs/thralls and Jews in the novel. The well-being of the lower classes and outsiders depends very heavily on the goodness of the important members of society. The whole plot of Ivanhoe rests upon this.

That the depiction of the serf was linked to oppression is made very clear. His look is described as “sad and sullen; his aspect was bent on the ground with an appearance of deep dejection, which might be almost construed into apathy, had not the fire which occasionally sparkled in his red eye manifested that there slumbered, under the appearance of sullen despondency, a sense of oppression, and a disposition to resistance.”

Why is this so important? Scott’s depiction of the Middle Ages demonstrates some of the more profound aspects of our own literature. Scott’s insights into status and colonialism may not have been visible to Scott himself, but they help us see where our own bias comes from. The cultured self-view we can obtain from reading Ivanhoe critically is extraordinary.

Scott’s medieval England is an artificial society built on assumptions and stereotypes. It’s well enough executed and long enough in our own past so that we can see ourselves in it. Ivanhoe’s Middle Ages presents us with some of our own archetypes, if we read it cleverly.

Gillian Polack is an Australian writer and scholar who focuses on how historical fiction, fantasy and science fiction writers see and use history, especially the medieval period. Among her books is The Middle Ages Unlocked. Learn more about her Gillian’s work on her website, or follow her on Twitter @GillianPolack