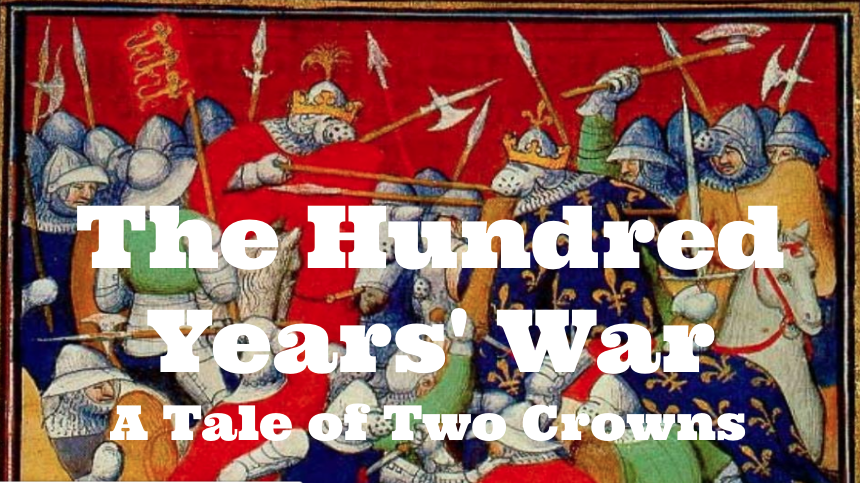 “For God’s sake, let us sit upon the ground – and tell sad stories of the death of kings …” -Shakespeare, “Richard II”

Although the record of the titanic conflict later to be known as the Hundred Years War is replete with discussions over the conduct and consequences of the war, one cannot truly understand any of it without first understanding how the clash arose in the first place.  Ultimately, the war was caused by the confluence of a series of events – deeply rooted in medieval concepts of statehood and sovereignty that seem alien at first to modern observers – that eventually formed into a cascade that swept both belligerents (as well as the rest of Europe) out of the medieval era and towards their early modern national destinies.  This entry will attempt to explore the nature of the feudal relationship between the kings of England and France as well as the unique alterations to this relationship made by Edward III that overturned centuries of tense, but predictable status quo.

As has been discussed previously in this series, the Anglo-Norman rulers of medieval England possessed deeply rooted social, cultural, and political ties to their French neighbors across the Channel.  Since the days of the earliest Norman adventurers, Norman culture was entrenched within the greater cultural and linguistic sphere of the French – none of which was diminished by Duke William’s conquest of the Saxon English throne in 1066.  However, though many writers see the Norman Conquest as the ultimate cause of the Anglo-French split and accompanying Hundred Years War, such theories are too simplistic and overlook the fact that, for nearly three centuries after the Conquest, the Anglo-Norman elite were virtually indistinguishable from their counterparts on the Continent and that Anglo-French relations were intricately intertwined via cross-cultural, political, and even familial unions.

This “grassroots” Entente only deepened with the rise of the Angevin Empire under Henry II and Aliénor d’Aquitaine, establishing a “permanent” presence of the English state on French soil. French kings in Paris up to the 13th Century responded to this growing influence with a mixture of indifference and occasional alarm, but it was never viewed in terms of an existential threat to their own Crown. The situation began to evolve in the early 1200s when the great empire Henry had built began to fall apart under the disappointing leadership (and mere bad luck) of his youngest son, John I.  The French Crown, led by the shrewd and capable Philip II “Augustus,” experienced a burst of royal energy and political consolidation not before seen and its first target was to diminish as much of the Angevin English presence on the Continent as possible. By the time King John was cornered by rebellious barons at Runnymede in 1215 and forced to sign the first of the Great Charters, Anjou, Maine, Poitou, and even ancestral Normandy were all recaptured by the kings of France, leaving England with only a small, but heavily fortified foothold in Gascony as their sole cross-Channel possession.

From that point on, the French kings wasted no opportunity to leverage their far greater political power and resources against their neighbors in London – even going so far as to involve themselves in the ongoing domestic disputes between English kings and their disaffected nobility with varying degrees of success. Finally, in 1259, King St. Louis IX and King Henry III settled the dispute in the Treaty of Paris, establishing a political relationship in which the Kings of England owed formal homage to the Kings of France for their holdings in Gascony – a relationship that made the former official feudal subordinates to the latter despite being peers in ever other respect within their own realms.  If there could ever be found a single cause for the terrifying conflicts that would descend on both states a century later, the 1259 Treaty of Paris – ironically intended to end all such conflicts – is surely a top contender.

However, such dire consequences were not immediately apparent after 1259.  For almost the next century, an uneasy status quo settled into being between the two realms, with neither seemingly willing to push the boundaries despite occasional aggressive posturing that broke out into sporadic open conflict.  This is mostly because neither of the kings involved viewed each other as wholly illegitimate and their wars were thus “configurative” in nature rather than “constitutive”. However, this tense, but comfortable status quo all came to an abrupt and violent end in the mid-14th Century.

At his death in 1314, King Philip IV “le Bel” of France – perhaps one of the greatest administrators and iron-fisted rulers to ever occupy the throne – had no reason to fear the continuation of his legacy or his Capetian dynasty’s almost 400-year hold on the Crown as he had three adult sons that all survived him. However, in one of the most bizarre twists in history, all three of his sons would die by 1328 and would all fail to leave behind a male heir. The Capetian dynasty collapsed within a decade, creating a political crisis within France not seen since the end of the Carolingian Empire. The only person direct descended from the Capetian line was the teenaged King Edward III of England, son of Philip’s daughter, Isabella.

Scoffing at the very idea of an English king inheriting the throne of France, the French Estates chose Philip de Valois – a nephew of Philip IV – to take up the crown, establishing the House of Valois. But on the other side of the Channel, the idea of a stolen royal inheritance had already taken root in the mind of the young King Edward and he would use it to completely overturn nearly a century of established political status quo to preserve his own claims to a Continental presence. When Philip VI tried to declare the English holdings in Gascony as forfeit in 1337 due to Edward’s repeated failure to make formal homage and a host of other perceived offenses, Edward responded stunningly by declaring the Valois to be usurpers and that the true heir to not only the throne of Capet and of France was himself.

To drive this point home in dramatic fashion, Edward III had the royal arms of England quartered with those of France and publicly displayed in 1340 while fomenting uprisings against the French in Flanders.  The socio-political order that had been adhered to for centuries by both England and France was irrevocably overturned and their conflict from this point on took on an existential nature to it, something the French spent almost two miserable and defeat-filled generations before finally coming to grips with and nearly losing their very statehood in the process.

Dr. Andrew Latham is a professor of political science at Macalester College in Saint Paul, Minnesota. He is the author, most recently, of a monograph entitled Medieval Sovereignty, to be published in 2020 by ARC Humanities Press.  You can visit Andrew’s website at www.aalatham.com or follow Andrew on Twitter @aalatham

Capt Rand Lee Brown II is a commissioned officer in the United States Marine Corps currently assigned to Marine Forces Reserve.  Holding a Master of Arts degree in Military History from Norwich University with a focus on medieval warfare, Capt Brown has written on military history for a variety of forums, including the Marine Corps Gazette and Medievalists.net.