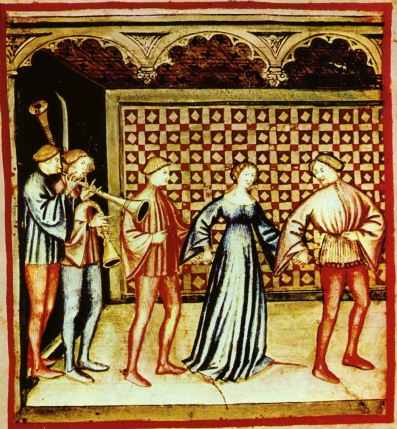 As I was getting ready for my tap class this week (yes, I know), I was thinking about dancing in the Middle Ages.

Most villages didn’t have a space large enough for everyone to get together, except the churchyard, so that’s where they danced. There’s not a huge amount of information about these dances, since they were danced by people who, for the most part, couldn’t write. Besides, why would they describe something that everyone knew how to do?

One of the things that is known is that there was a carolling dance where everyone held hands in a circle around one person in the middle. You can see people holding hands to dance in the picture at the top of the post. The person in the middle sang the verses of the song and everyone in the circle sang the choruses while they stepped to the right or the left. Dances weren’t probably much more complicated than that, although there was probably stamping as well. Speed probably made it more exciting and amusing, when dancers bumped into one another.

The carols did not have the kind of lyrics that we’re familiar with these days. They tended to be very bawdy, which was one of the reasons why priests complained about the dances taking place in the churchyard.

Another reason why priests weren’t keen on dancing was because St Jerome said that women dancing were the swords of the devil.  They were thought to tempt men to fornication.

For the upper classes, dancing was something that they watched as well as did themselves. Dancers were professionals who could be retained by a lord for his household’s entertainment. Usually they had their own musicians and sometimes they were also jugglers and singers.

Some entertainers were not attached to a household, preferring to travel and take up casual employment, but this could be rather dangerous. There was always the chance that they could be arrested. Men without a lord were viewed with suspicion. For all the constables of the towns they passed through knew these men could be outlaws.

The upper classes danced a bit and it was one of their favourite occupations during tournaments. Sometimes they would dance in fancy dress, just as they would fight in the tournament dressed as cardinals or aldermen.

A few dance tunes have survived from the fourteenth century. Here are two Italian tunes which were paired together – a slow dance followed by a fast dance. They’re the Lamento di Tristano and La Rotta.