The candid life story of Princess Margaret’s aide, which has proved a publishing hit, provides insights into the aristocratic system and the real life behind The Crown 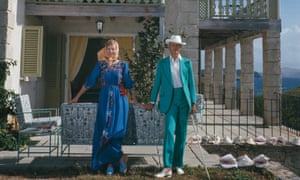 
Nothing goes down better with a section of the British public than a posh old lady who isn’t afraid to talk dirty. It’s the contrast between the drawling vowels, blossomy complexion, sculpted cheekbones and sexual frankness that turns us into what Nanny would probably call “giggling ninnies”. Anne Glenconner, who at the age of 87 has published a bestselling memoir, was a big hit this autumn on The Graham Norton Show, Loose Women and all manner of breakfast television sofas. One of her plummiest anecdotes concerns her mother, Lady Coke, trying to explain sexual intercourse in terms of canine coupling. “Do you remember Daddy’s labrador getting on top of Biscuit? Well, that’s what happens when you get married and have sex, except you will probably be lying down in a bed.” Cue peals of shocked laughter from the studio audience.

In fact, there’s nothing especially odd or even socially elevated about Lady Coke’s advice to her eldest girl on the eve of her 1956 marriage. Anne belonged to the generation of girls who were too young to have served in the WAAF and, instead of jitterbugging with young men, spent their chaste teenage years knitting socks for them. You didn’t need to have been brought up on the 27,000 acre Holkham Hall estate, nor been crowned “Deb of the Year” by Tatler, to have arrived at your courtship years without knowing much about men beyond a vague rule of thumb that some were “safe in taxis” while others most definitely were not.

Colin Tennant, the man Anne was marrying, really wasn’t safe anywhere, which doubtless explains his appeal. The evening after her disastrous wedding night to the mercurial banker, the blushing bride found herself whisked through Paris for a “surprise”. This turned out not to be dinner at the Ritz, but rather a seedy brothel where she was forced to watch a couple have sex, as if performing a public service. When they asked if Anne would like to join in, she replied politely: “That’s very kind of you, but no thank you.” Cue more studio laughter.


She must have got the hang of it pretty quickly because the first of the five Tennant children was conceived on the honeymoon. What has made this book such a hit, however, is not the rolling out of anecdotes about saucy toffs, but rather the access it provides to the workings of the royal family in the second half of the 20th century. In 1971 Anne was appointed lady-in-waiting to her childhood friend Princess Margaret. The two little girls who had delighted in jumping out from behind the curtains at the footmen in wartime Holkham Hall now spent their adult days together, opening hospitals, looking interested in prisoners’ artwork, and trying not to yawn when seated next to a particularly boring bishop. They would also share off-duty times on Mustique, the midgy Caribbean island which Tennant had bought for a song in 1958 and turned into a playground for millionaires. Cue some larky tales about Bianca Jagger and David Bowie with sand between their toes.

Sign up for Bookmarks: discover new books in our weekly email

Anne even has a stake in season three of The Crown, where she is played by Nancy Carroll as the counsellor and confidante of Helena Bonham Carter’s Margaret. In an oddly dreamlike merging of memoir and dramatic narratives, Anne recently found herself sitting side by side with Bonham Carter on Graham Norton’s sofa promoting their parallel projects. Naturally the two women knew each other already, Bonham Carter being cousin to Tennant, AKA Lord Glenconner.

This makes the upper class sound like a cosy tight-knit clan, but one of the chief revelations of Lady in Waiting is just how cruel and wasteful the aristocratic system has historically been to women. Because of the cast-iron rule of male primogeniture, Lady Anne and Princess Margaret were obliged to spend their entire lives as left-overs “waiting” for someone to decide what to do with them. When Anne Coke was born in 1932 as the first child of a man who would become the fifth Earl of Leicester she was a “big disappointment”, who “broke the line” by being a girl, the first of three sisters. As a result of her wrongness the magnificent Holkham Hall and the earldom passed on her father’s death to her male second cousin. Margaret too was hexed by her gender: if the clever, headstrong girl had been born a boy she would have leapfrogged our present Queen to succeed their father in 1952. Instead of useful, purposeful public lives, the mischievous best friends found themselves entirely surplus to requirements.

This sense of being in the way was compounded when both women were disqualified from marrying the men they loved. Before her marriage to Tennant, Glenconner was blissfully engaged to “Johnnie” Althorp, who would later go on to father Diana, Princess of Wales. But as a result of Johnnie’s father Earl Spencer muttering about Anne having some distant mentally “defective” cousins (who also happened to be first cousins to Princess Margaret and Queen Elizabeth), the dashing cavalry officer slunk away without telling his fiancee that the match was off because of her “mad blood”. Princess Margaret, meanwhile, was famously not permitted to marry Group Captain Peter Townsend on the grounds that his earlier divorce was incompatible with her sister’s position as head of the Church of England. Instead, both women accepted men on the rebound whom their families considered distinctly below the salt. Margaret married “Tony Snapshot”, as Glenconner’s father wittily called Antony Armstrong-Jones. Meanwhile, Glenconner insisted that his own daughter’s fiance, Tennant, whose family fortune was far too recently based on bleach, line up with the beaters rather than the guns when attending a shoot at Holkham Hall. 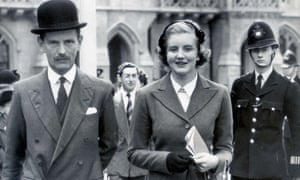 Perhaps both young men were cross about having such non-U names (“Colin” and “Tony” sound as if they belong at a Rotary Club social rather than Buckingham Palace). Whatever their reasons, they used their “artistic” temperaments as a cover story for some truly appalling behaviour. Armstrong-Jones took to leaving notes for Margaret along the lines of: “You look like a Jewish manicurist and I hate you”, while Tennant thinks nothing of embarrassing his wife at parties by tearing off his paper underpants and eating them. Both men have mistresses, both men present their wives with a “love child”. Tennant’s final act of cruelty came in 2010 when he left a scrappy handwritten will bequeathing his fortune – still huge despite the financial depredations that had come with Mustique – to a local employee. What makes it all so much worse is that Glenconner says that she still isn’t sure whether he did it simply as a stunt to ensure that his reputation as an eccentric aristocrat would survive post-mortem.

Although Glenconner never mentions any kind of mental health diagnosis for her husband, Tennant is clearly troubled; he spends hours in a foetal position begging her to talk him down from his own anguished self. Her real focus, at least in this book, is on her best friend Margaret, who she believes has been horribly traduced in recent years as a narcissistic monster of rudeness and self-regard. While never resorting to a cover-up, Glenconner provides a nuanced character portrait of a woman whose life sounds truly wretched. Above all, she emphasises that Margaret was marvellously supportive during the years in which Glenconner was forced to endure the death of her first two sons and the permanent disablement of her third following a motorcycle accident. In particular she wants us to know that, long before Princess Diana became famous for fighting the stigma of Aids, Margaret was visiting dying patients at the London Lighthouse hospice; they included Glenconner’s second son, Henry. HRH didn’t do hugs, but she was funny and her jokes made the young men laugh.

In return it’s clear that Glenconner was marvellous to her unhappy friend. Her account of Margaret’s final year, bundled up in bed and wanting nothing more but to hold hands or watch Antiques Roadshow with her, is beautifully, which is to say tactfully, done. Indeed, discretion and honour emerge as the hallmarks of Glenconner’s career as a royal servant, culminating in this book which manages to be both candid and kind. Above all, she demonstrates a remarkable readiness to own up to her own mistakes. In particular she worries that the classic absentee mothering style of the aristocracy, involving nannies and boarding schools, may have been at the root of her eldest son developing the drug addiction that eventually killed him. If only, one can’t help thinking, members of the present royal family would follow their admirable servant’s example of honest self-reckoning and personal responsibility.

• Lady in Waiting is published by Hodder & Stoughton (RRP £20) . To order a copy go to guardianbookshop.com. Free UK p&p over £15.