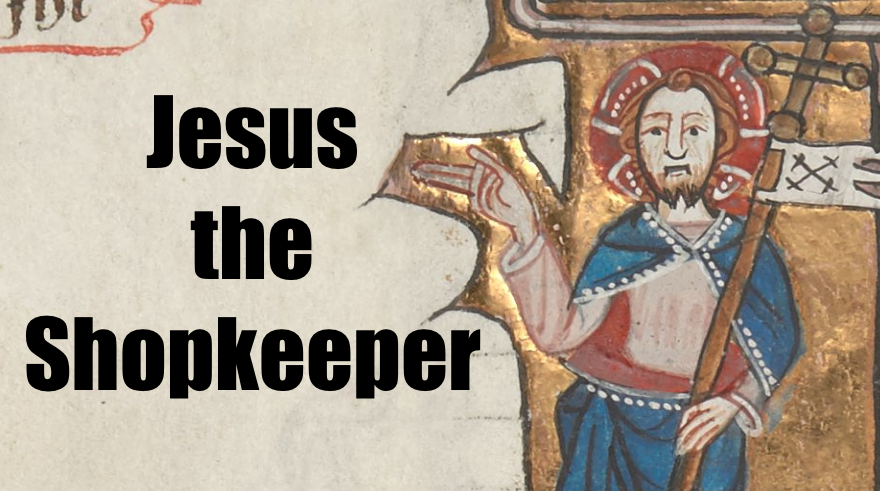 Beguine visionary Agnes Blannbekin (c.1244-1315) of Vienna loved to read. Her confessor would read hagiographies and sermons, and God even granted her miraculous light to read at night after the fire had run down. In her home and the Franciscan church she attended, she was surrounded by a rich artistic world, with tablet icons of the virgin martyrs and a gilt crucifix that stunningly reflected the sun against gold.

Steeped in contemporary religious culture as she was, it’s not a surprise that her Revelations share much in common with other women visionaries and mystics of her time (Mechthild of Hackeborn, Gertrude of Helfta, Angela of Foligno, Marguerite Porete, Christina of Stommeln, Marguerite d’Oignt, Clare of Montefalco, and Ida of Louvain are just some of her near-exact contemporaries). She experienced a lifelong intense zeal for the Eucharist and, like Ida, devotion to the Christ-child.

The revelations alternate between events described as happening to her, such as the altar at Mass smelling wonderfully like fresh-baked bread, and moral or doctrinal lessons. Drawing in familiar courtly imagery, for example, the things necessary for true contrition appear to her as six knights: Compunction, Faith, Love, Desire for God, Mary’s Help, and the Passion. Elsewhere, she even pairs three knights representing virtues of the soul with five minstrels to represent holy use of the senses.

But as already evident with the knights and minstrels, Blannbekin’s visions have a certain vividness and embedding in contemporary society that distinguish her from other religious women. This is most beautifully apparent in her tripartite explanation of Jesus as a fourteenth-century shop owner. Her confessor-scribe records:

Christ appeared to her clad in a bishop’s vestments, all except for the chasuble. The paraments had the color of heaven, and the miter shone with gold and precious stones. And three sites and a great multitude of people surrounded him. He had a kitchen at one place, where he alone prepared food. In another area, he had a pharmacy with aromatic herbs, where he alone prepared medicines. At the third location, he had a store where he, like a shopkeeper, displayed a diversity of goods.

And people went to all three places to get something from what was available. So they went to the kitchen for food, to the pharmacy for medicines, and to the store for merchandise. And some would be completely rejected from there, and it was forbidden that they should receive anything. Others were set some limits, and so they did not receive immediately what they desired. Others received immediately and without difficulty what they needed.

The closing section about the “shoppers” appears to be an easy allegory for hell, purgatory, and heaven. Throughout Blannbekin’s Revelations, however, the three categories of Christ withholding himself, Christ very carefully choosing the moment to allow a sinner to rejoin him (often with Blannbekin’s prayerful aid), and those who always walk with Christ frequently serve to illustrate the dangers of sin in this world.

The striking vision of Christ as a cook, a pharmacist, and a merchant fits right into Blannbekin’s physical world of Vienna and spiritual world of religious instruction. So naturally, her confessor explains, “She who saw this vision also understood its meaning.”

Christ the cook whips up four recipes. The warmth of the spice-suffused dish represents the fire of compassion that connects one to God. The drink, almond milk, mirrors the sweetness of compassion for neighbors. Third, Christ serves a dish heavy with butter. Blannbekin interprets this as prayer, because “it is sweet and good for everything.” Finally, the sauce made of vinegar and strong herbs represents God’s grace and consolation through its powerful flavor. 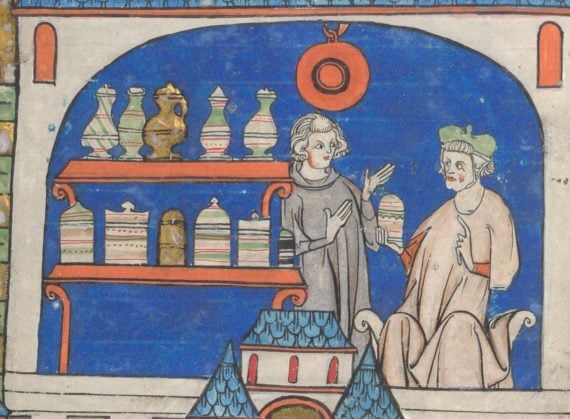 Christ the apothecary, on the other hand, dispenses two types of medicines. The first set are preventative, to maintain health. A sleeping potion represents contemptus mundi because the drinker becomes asleep to the world. Another mixture bestows spiritual strength as well as physical. A third, which Blannbekin describes as “sweet and delightful,” indicates the “tasting” of devotion. The sweetness of God saturates the revelations of the beguine’s more famous contemporary Gertrude of Helfta, and appears as both taste and the scent of honey in numerous saints’ lives. The second set of medicines are dispensed from jars too numerous to count and too tedious to name, Blannbekin says, but she gives the example of a treatment for leprosy:

It was made apparent that the lepers represented those who indulge in debauchery…Against leprosy, he administered different types of water extracted from diverse plants through the strength of fire and with the help of incantations, [plants such as] roses and violets. They symbolize the various types of confusion into which those which are lascivious fall, and through which they are called back and cured of the leprosy of debauchery.

The other two medicines she describes cure other dropsy, representing avarice; and blindness, representing pride. All of these are traditional associations of physical sin symbolizing spiritual (which, medieval medical authors clarify, does not mean causation). But Blannbekin’s presentation is anything but traditional. In addition to the memorable image of Christ dressed as an apothecary mixing up remedies, that particular profession means the vision’s theme is not sin but forgiveness. First, she emphasizes the forgiveness of sins, one of her most frequent teachings. Second, the use of an image familiar to her and to her readers would be more memorable.

Christ the shopkeeper, meanwhile, stocks jewels and gemstones and fine clothing. This is a far cry from Franciscan poverty! But there is an interesting distinction made silently. Rings and other trinkets to wear represent the anguish of being in the world. This object “sold” by Christ brings pain, not pleasure. The lush red cape and cloak signify suffering disgrace and contempt from others.

On the other hand, gold itself represents divine love, and precious stones, perfection. The man-made goods, in other words, draw in the evils of the world, and can only promote spiritual growth through suffering. The created objects reflect the goodness of the divine.

As with much of the Revelations, Blannbekin’s explication of Christ in the town marketplace do not offer revolutionary content. What they are, in fact, are lessons—exactly the lessons circulating in contemporary religious culture; exactly the lessons that preachers and theologians intended to teach. Blannbekin stakes her claim as a visionary and holy woman, sure, but perhaps more importantly as a teacher. Her vision of Christ the cook, Christ the apothecary, and Christ the shopkeeper helps drive home this particular lesson to the burgeoning population of urban Christians who recognized the resonance with their daily lives.

Cait Stevenson earned her PhD in medieval history from t