Lately I’ve been expanding my knowledge about culture and history of Mexico and Central American nations by reading few books about the subject. The reason for this is simply the hunger to know/understand more about the topics, events and characters displayed on stamps of these countries. This write-up is not a history lecture per se, but more of a stamp illustrated list of various historical tidbits I find interesting.

Let’s begin with early steps of civilization… I confess I never really knew (or had blissfully forgotten) that America was the last continent inhabited by man. This happened only about 40,000 years ago in north, and southern tip of Chile was reached as late as only 9,000 years ago.

US 1991. First Americans crossed over from Asia.

I think the era most people recall and recognize best from Central American history are the great Indian civilizations, especially the Mayas and the Aztecs. But I never really understood the real size/extend of these cultures – for example the Toltec culture covered an area from Mexico to Nicaragua. That’s a huge achievement considering the conditions and means people had for moving around.

The arrival of white man and the era of Spanish colonialism are very controversial era in history of Central America. In a way I am not surprised that the postage stamps do not give much tribute to acts of Cortes and his fellow conquistadors. Instead, ‘gentler’ stories from this era appear on quite many stamps. Take for example the Bartolomé de las Casas who is displayed on below Guatemala stamp. He was a former conquistador, who turned into priest and early human rights activist. He even went to extreme lengths of creating the worlds first Utopian community while trying to battle against slavery of Indians:

I have often wondered why most Central and South American countries have Spanish relations (with the exception of Brazil and few others), until I finally learned about the treaty of Tordesillas. In 1494 the crowns of Portugal and Spain (Castile) agreed to divide all the land on Earth (outside of Europe of course) between the two of them, irrespective of who was already living there. Pope Alexander VI draw an imaginary (pole-to-pole) line at 370 leagues from the Cape Verdes (because no land had yet been officially discovered outside that range). All land west of this line was appointed to Spain leaving eastern parts to Portugal. 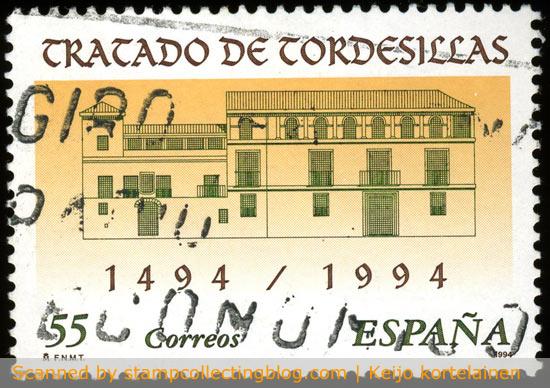 Of Central American nations, the only exception to this is Belize (former British Honduras). It used to be Spanish property too, but colonial rivalry between Spain and Britain finally led to fact that it became the only country in central America to fall under British regime and laws.