Glowing green 'dunes' in the sky mesmerized skygazers. They turned out to be a new kind of aurora. 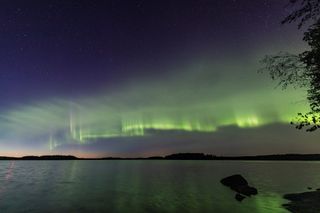 When mysterious glowing stripes of green lit up Finnish skies in 2018, it didn't go unnoticed by avid aurora chasers. The pattern of light was unfamiliar and strangely perfect, reaching out toward the horizon like a set of celestial sand dunes.

Sure enough, the light show dubbed by the citizen scientists as "the dunes" turned out to be a  new type of aurora. This aurora is formed by the dramatic dance of gravity waves and oxygen atoms, according to new findings published today (Jan. 29) in the journal AGU Advances.


The path to discovery began years ago when a group of aurora enthusiasts emailed Minna Palmroth, a professor of computational space physics at the University of Helsinki, asking her to join their Facebook group. The goal? Have Palmroth explain the physics behind the auroras they were photographing.

Palmroth was happy to do so. After a while, she realized her answers were becoming repetitive — so she went on to publish an aurora guidebook. But in October 2018, the aurora chasers came back to her with images of a puzzling aurora.

"Then I realized that oh no ... I haven't seen these before," Palmroth told Live Science. Upon first look, these stripes looked to be the result of gravity waves, or density disturbances in the upper atmosphere. The upper atmosphere is streaked with many different gravity waves that run in different directions and are of different frequencies and sizes. But that explanation didn't seem possible, because the waves were so evenly spread.

So Palmroth and her team organized a campaign for the evening of Oct. 7, gathering scientists and citizens throughout Finland to photograph the dunes. By analyzing these photographs, the team began to understand the physics behind the phenomenon.

"Collaborations with citizen scientists are getting increasingly important because they can become 'mobile sensors' that chase interesting aurora easily and catch new features that scientists didn't notice before," said Toshi Nishimura, a research associate professor of electrical and computer engineering at Boston University's Center for Space Physics, who was not part of the study.

The dunes (marked by the magenta circles) as seen from two different locations in Finland (Ruovesi and Laitila) on Oct. 7.  (Image credit: AGU Advances/Palmroth et. al.)

Auroras result when the sun hurls charged particles toward our planet. Those particles travel along the magnetic field lines at our planet's poles and slam into the atoms and molecules in our atmosphere, causing those molecules to emit light. These stunning light shows can come in many different shapes and colors; oxygen glows in green and red while nitrogen glows in blue and purple, according to NASA. Astronomers also use the shape of auroras to learn what's happening in the upper atmosphere where they form.

While most auroras extend vertically, the dunes extend out toward the equator horizontally in undulating waves. No one had observed such a wave-like structure in an aurora before, Palmroth said.

In this channel, the waves propagate horizontally and over long distances without subsiding, creating alternating folds that are either enriched with oxygen or depleted of oxygen. When the electrons from the sun stream in, the folds with higher oxygen levels light up more than the places lacking in oxygen, creating the characteristic stripes. 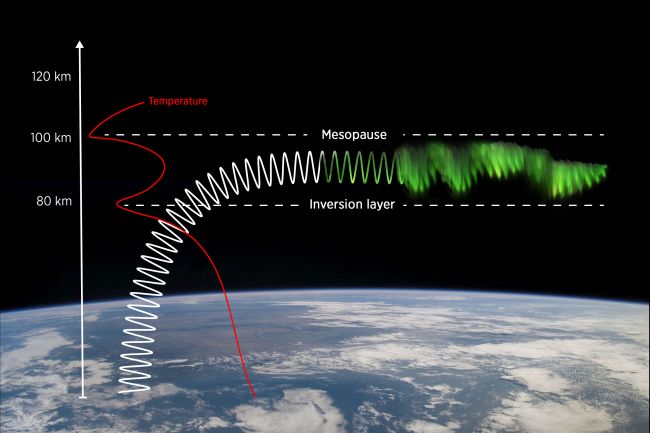 Rarely, a gravity wave rising up in the atmosphere can be sandwiched between the mesopause and an inversion layer, causing it to propagate horizontally and travel long distances without subsiding. (Image credit: Jani Närhi)

"This is a very interesting observation," said Steven Miller, the deputy director of the Cooperative Institute for Research in the Atmosphere at Colorado State University, who was not a part of the study. "My first reaction when seeing the pictures were that those might be atmospheric gravity waves that are being 'highlighted' by the auroral activity — it appears that this is the hypothesis of the authors as well."

Mesospheric bores can account for the patterns seen in the dunes, but "I surmise that [these] 'dunes' are in fact a subset of a much more widespread region of atmospheric gravity waves that happen to be highlighted by the aurora," Miller told Live Science.

By using stars in the photos as reference points, the team was able to calculate the altitude of the dunes to be around 62 miles (100 km) high, which is typical of auroras. But this poorly studied region of the atmosphere is too high to measure with radars and balloons, and too low to send spacecraft without them burning up. So it's sometimes called the "ignorosphere," Palmroth said.

"This is the first time these gravity waves are observed," Palmroth said. "In general the bores are rather a rare phenomenon." But observing the dunes could reveal more about the bores, Palmroth said.

For instance, scientists found that the dunes occur at the same time and in the same region where electromagnetic energy from space transfers to the upper atmosphere, which Palmroth suspects could be connected to the creation of the inversion layer mesospheric bores. "We want to see whether this is really true," she said.