The Value of His Artistry and Identifying Reproductions 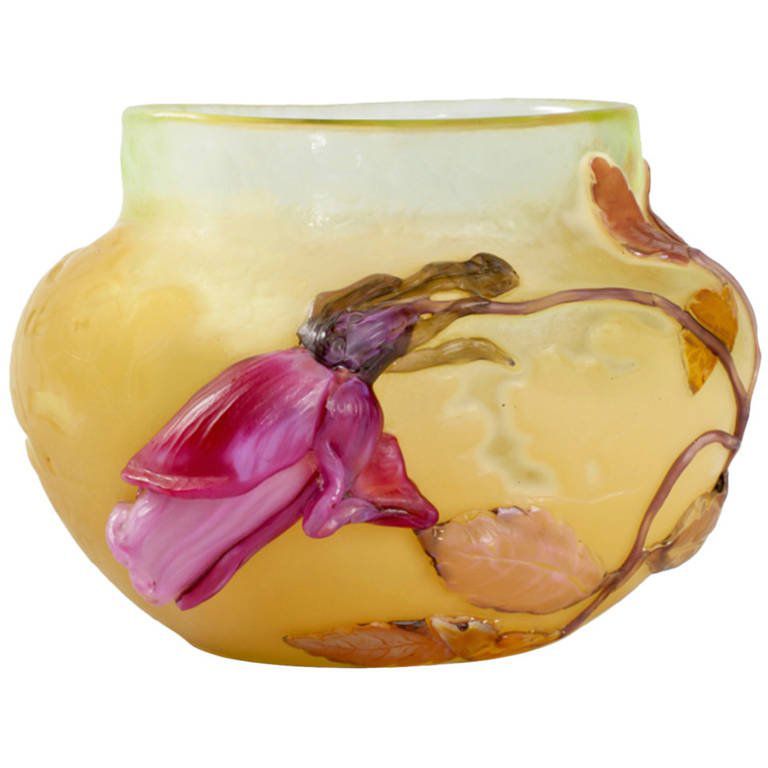 Emile Gallé was born in France in 1846. Before following in his father's footsteps by establishing his glass workshop in the early 1870s, he studied not only art and botany, but also chemistry. Gallé incorporated his skill as an artisan and interest in botany into designs obviously inspired by nature. His training as a chemist also contributed to his keen creativity in producing glass.

After experimenting with clear glass decorated in more traditional styles early on, he began to using colored opaque glass for his pieces.

These colors were often layered and etched or carved to create unique designs, an ancient technique referred to as "Cameo" glass.

His work was celebrated at the Paris Exhibition of 1878 and again in 1889, and he became well known as a creative pioneer in glass manufacture incorporating Art Nouveau elements into his work. With marquetry being widely used in furniture design at the time, he sometimes referred to his technique as "marquetry of glass" by using various types of etching, casing unique colors, applying metal foils, and adding air bubbles to impart interest and artistry to glassware manufactured in his workshop.

Frederick Carder, co-founder of Steube Glass Works in Corning, New York, was among those who studied glass crafting techniques with Gallé. Carder was likely inspired by this learning to create some of Steuben's most popular designs in the early 1900s - the Bubbly pattern as one example - given their similarities to some of Gallé's earlier work.

The Daum brothers were also influenced by their friend and neighbor Gallé.

Gallé died in 1904 but the workshop he established in Nancy, France operated under his name until 1914 when production ceased due to The Great War. His son reopened the business after the war producing two and three layer acid etched designs through 1936 when the business reportedly closed for good.

What Makes Gallé Glass So Valuable?

Gallé is viewed as one of the upper echelon names in collectible glass with examples from his workshop easily worth thousands apiece today. Rare pieces in excellent condition can command five to six figures in the right setting, primarily high end auctions.

The fine craftsmanship of pieces bearing the Gallé mark leads collectors to pay high prices to own them. They are also rare. Even though his workshop employed more than 300 people at one time, the hand crafted nature of the pieces led to low production in most instances and there aren't large quantities of authentic pieces being offered for sale in the modern antiques marketplace.

Have Gallé Pieces Been Reproduced?

Many reproductions marked Gallé have been made in China and imported to the United States. These have largely been sold as new in gift shops and some of them still have the "China" import paper labels adhered to them. They are clearly not being sold as antiques or collectible glassware in these instances.

However, some pieces have made their way into the online auction marketplace and other venues frequently shopped by antiques enthusiasts such as flea markets. Some sellers are knowingly trying to pass these off as authentic Gallé wares, others are as confused about them as their potential customers.

The key to identifying Gallé reproductions from China is in the manufacture. Many newly made "Gallé" pieces are molded glass, also known as pressed glass. This means the glass is not cut or etched or otherwise hand embellished to form the design. Instead, the shapes making up the design are molded into the glass. The best way to educate yourself about authentic Gallé glass is to examine genuine pieces. You can do this by attending a high end antique show or shop where fine glass is being sold.

Other mouth blown Gallé reproductions are of better quality, and harder to distinguish. Some of these were made in Romania. One sign that a piece is not genuine is the absence of a polished pontil common in antique blown glass. The newer pieces are being blown from the top rather than the bottom so there is no pontil to polish smooth, according to information provided online by Philip Chasen Antiques.

In addition, many of the shapes of these reproduction pieces do not follow the original shapes used by Gallé.

Another tip-off that a piece may be a cheap imitation is a low starting bid or asking price. While you may run across an authentic piece of Gallé at a bargain price some day and it's wise to know what to look for just in case you do, exceptionally low prices serve as a red flag that the piece in question may not be an original.

If you are considering a Gallé purchase requiring a considerable investment, do your homework prior to buying, or buy from a reputable dealer who will stand behind their merchandise. If you buy through an online auction, be sure you can return the item if it does not pass as authentic when you receive it and have it examined by a qualified appraiser or professional dealing in antique glassware.