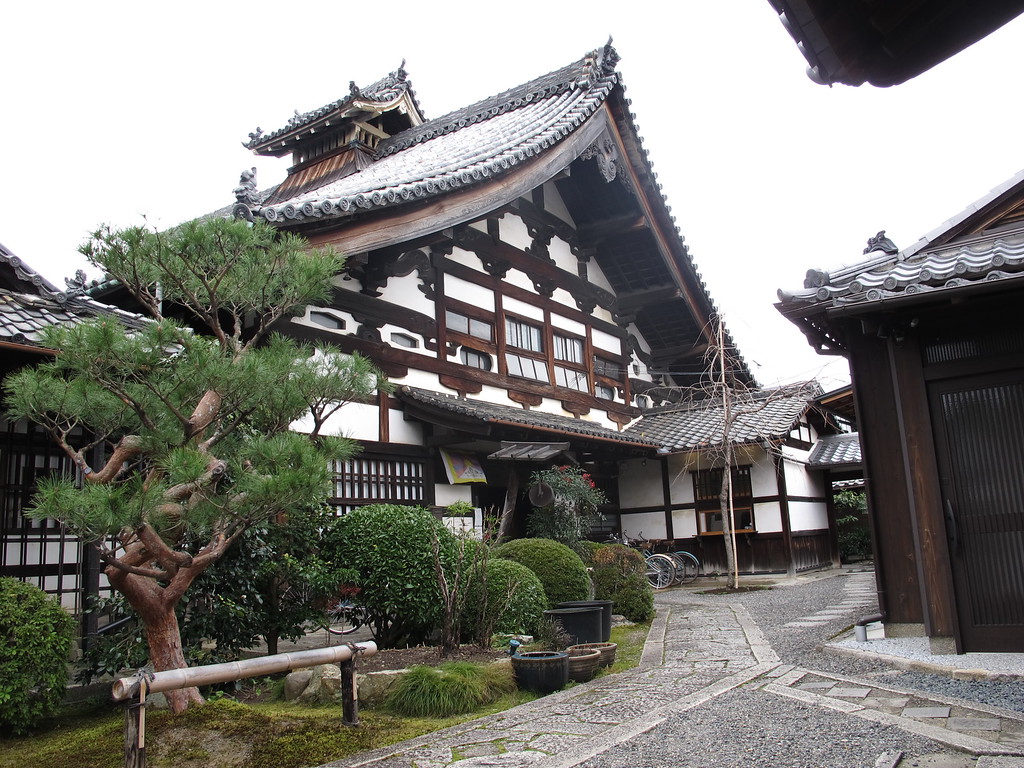 Shunko-in (“Spring Light Temple”) is a private sub-temple of Myoshin-ji which dates from 1590 and is not open to the public. However, it is possible to join one of the regular morning meditation sessions here. I highly recommend doing this. For 2,500 yen, along with the meditation, you will be given a talk on Zen mindfulness, a tour of the temple and garden and finally a cup of green tea with some sweet rice crackers. This meditation, talk and tour are all given in English by the highly personable and eloquent Deputy Head Priest, Reverend Takafumi Kawakami. 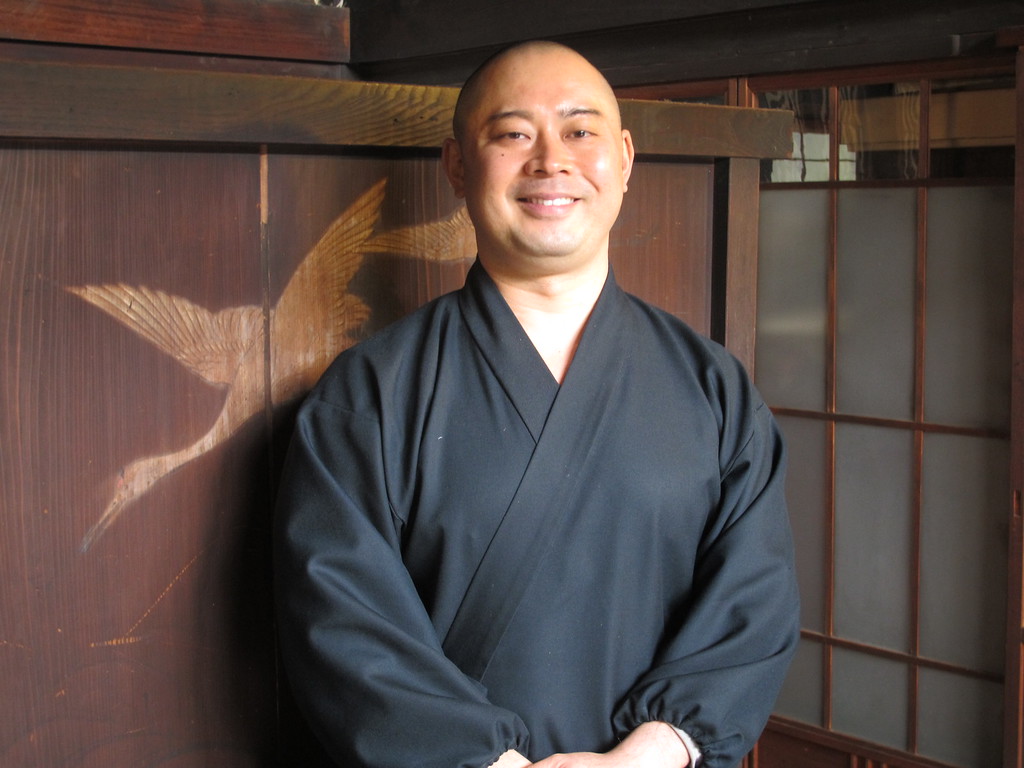 The talk he gave prior to the meditation was an excellent introduction to Zen thought and traditions and how to apply those traditions usefully and practically within your own daily life. Prior to going, I was a little worried about having to sit in a formal lotus position in order to meditate. My legs are not so flexible and I have found this uncomfortable in the past. However, our teacher reassured us that the important thing is to be comfortable and that how you sit is not as important as how your sitting helps you to relax and focus your mind. Rev. Kawakami also spoke on the practical benefits of regular meditation both mental and physical, and gave us useful tips on how to meditate. You can watch an animated video that Rev. Kawakami helped to create that presents some of these points.

Feeling refreshed after our meditation we were then given a tour of the temple’s major artworks and the garden. Again, Rev. Kawakami’s talk gave us real insights, not only into the history of this temple, but into how to appreciate both traditional Japanese art, and the layout of Japanese gardens. Several sliding door panels in the temple were painted by Eigaku Kano in the 19th century with gorgeous illustrations of Confucian precepts illustrated in gold and semi-precious minerals. The reverend pointed out that traditional art of this kind tends to be painted low on the panels because it was viewed by people seated on the floor. More recent artworks however, are painted with people seated on chairs in mind. 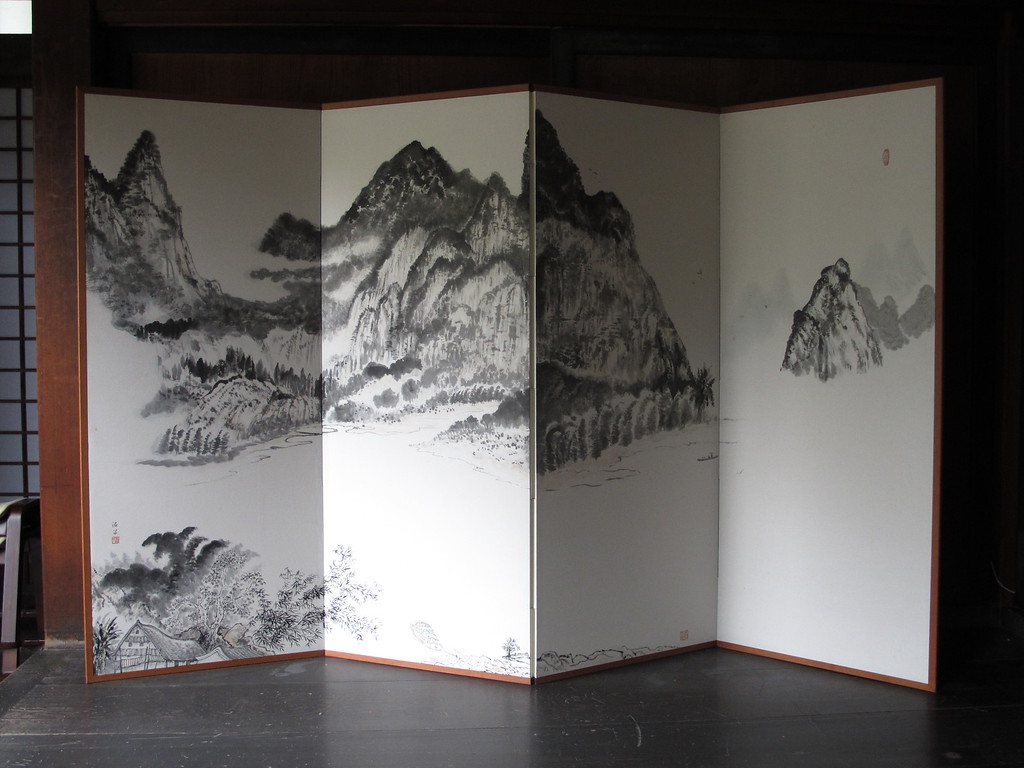 He also told us how Japanese gardens are designed to be viewed from inside the building, so that you can see a contrast between the geometric shapes of the inner manmade structure and the more organic lines of the natural scenes outside. 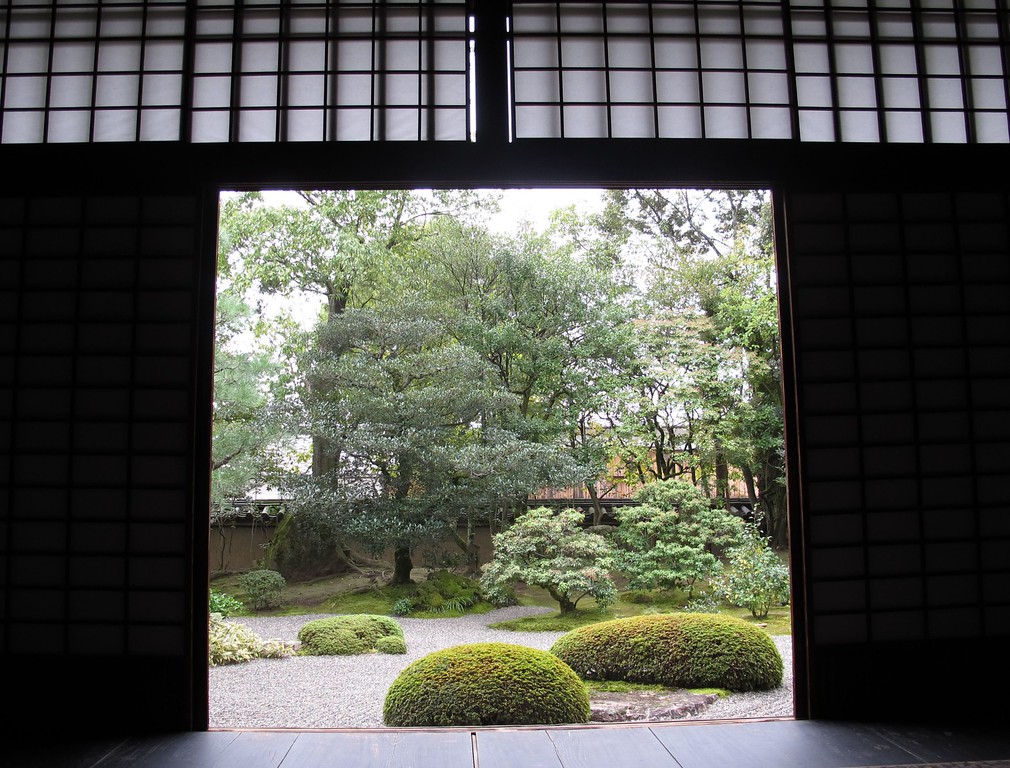 Finally, we were given a cup of powdered green tea along with tips on its preparation, the correct etiquette for drinking it, and some knowledge of its historical connection with Buddhism and its health benefits. All in all this was a highly instructive and enjoyable introduction to Zen temple culture and the highlight of my trip to Myoshin-ji.

To learn more about the English meditation practice and tour at Shunko-in please visit the temple blog and check the weekly schedule: 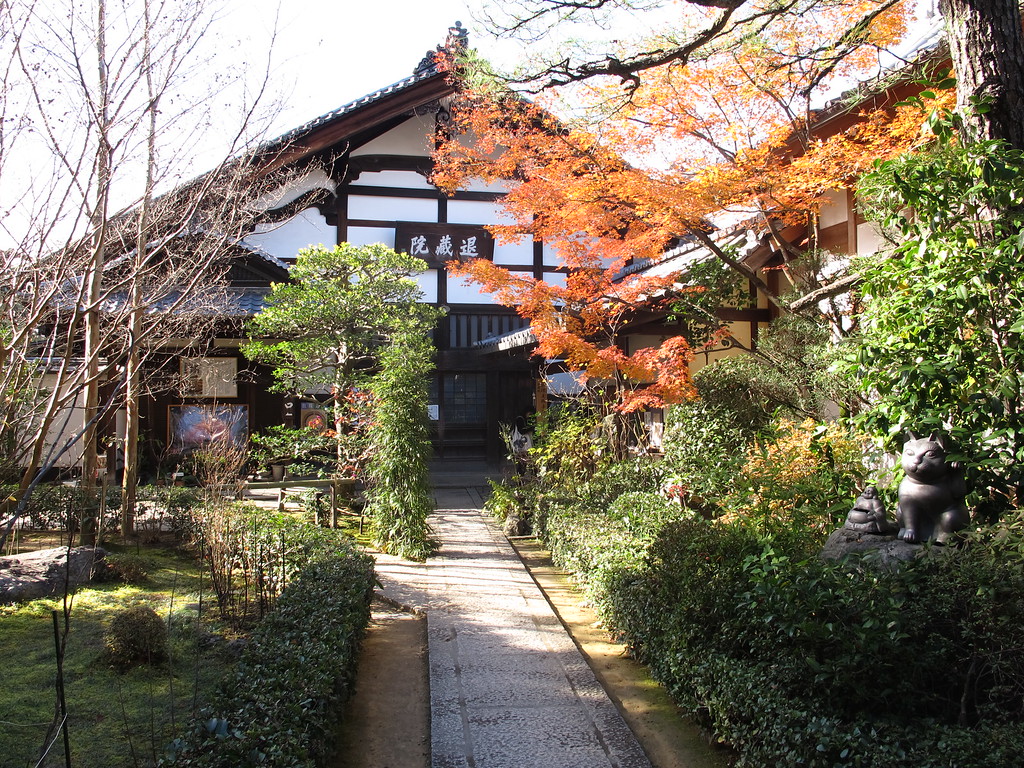 Taizo-in Temple is the oldest sub-temple in Myoshin-ji as it dates from 1404. It is famous for its gardens. The dry landscape garden, Motonobu-no-niwa, was designed by artist Kano Motonobu (1476 –1559) and its rocks and shrubs represent islands, streams and bridges in a three-dimensional realization of one of his paintings. 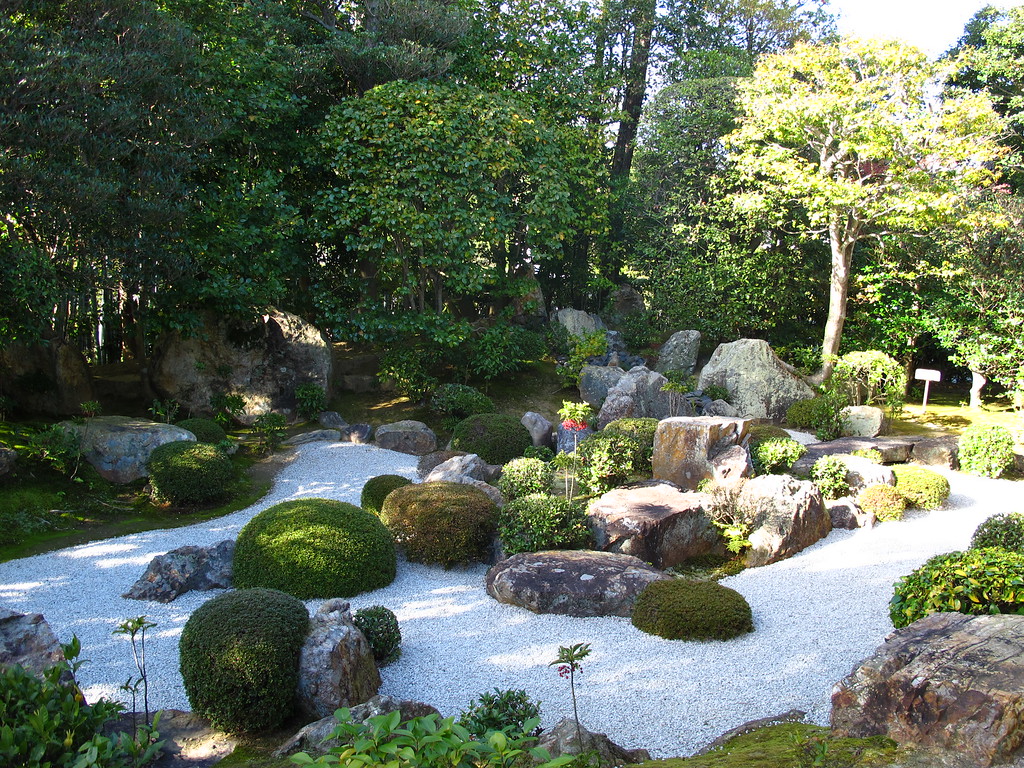 Following the temple stroll path you will pass between two more rock gardens. The Garden of the Sun on your left is made of lightly raked white sand. The Garden of Shade on your right is made with dark sand and the shadows cast upon it create interesting patterns on the deeply raked lines. 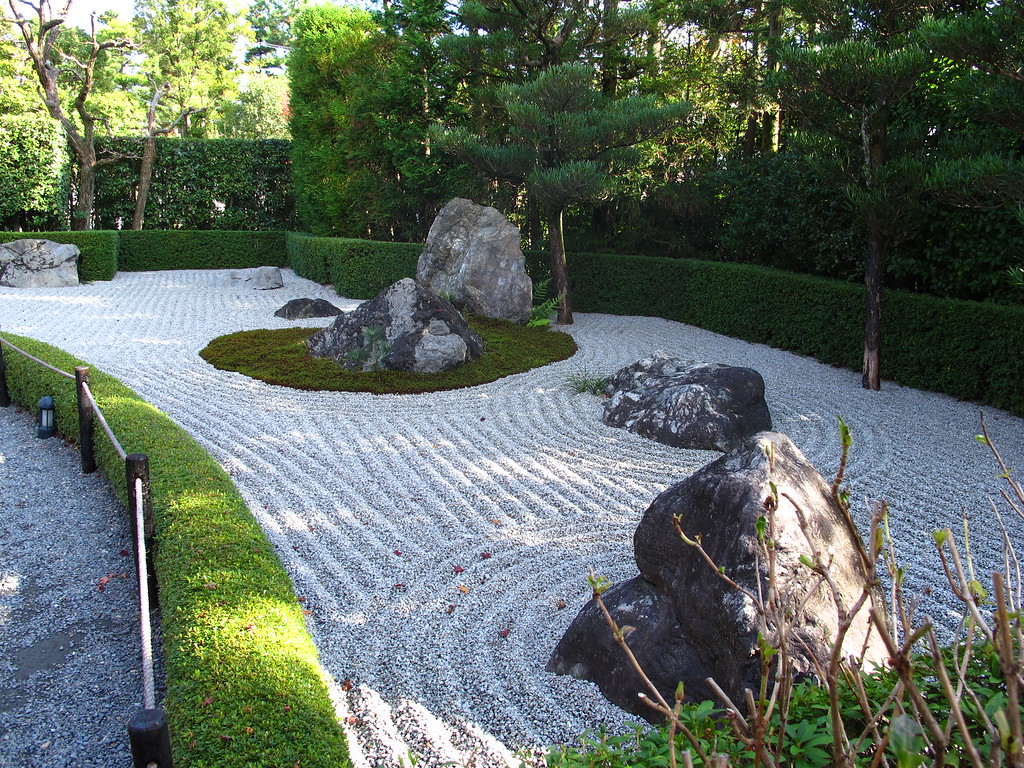 Further on the view suddenly opens up to a modern pond garden, with a cleverly layered landscape suggestive of forested mountains. 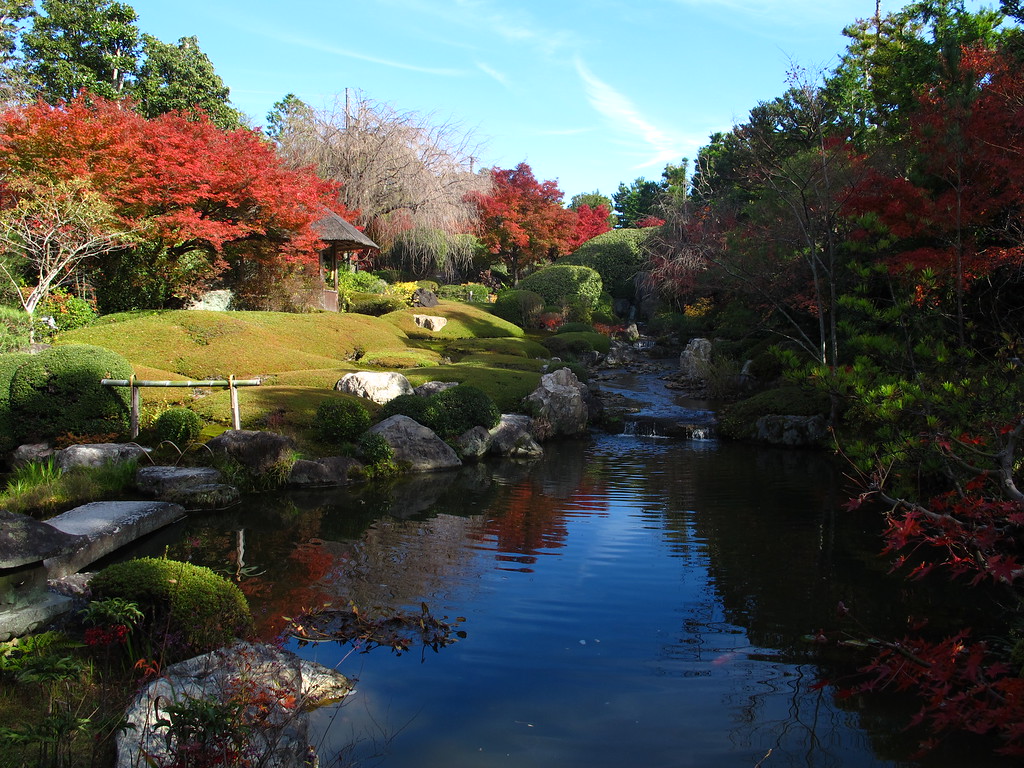 Taizo-in is open from 9am – 5pm and costs 500 yen to visit. To learn more about this temple visit their website: 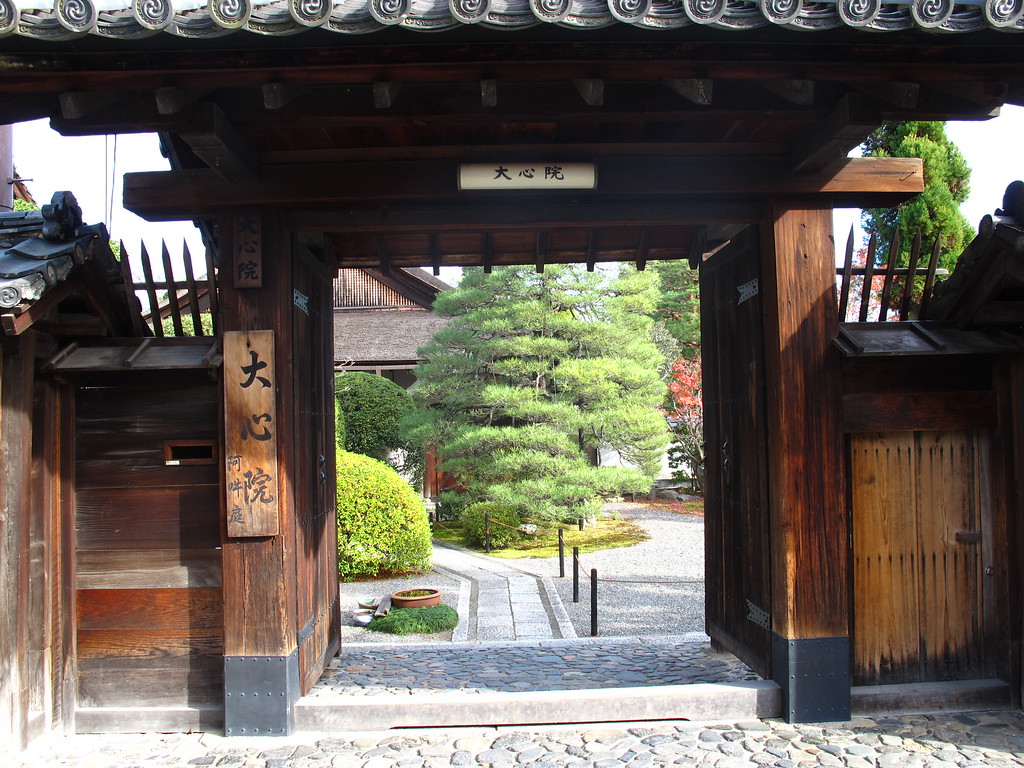 Daishin-in, or “Great Heart Temple,” dates from 1479. It has a deceptively simple garden consisting of two strips of raked gravel divided by paved stones. The lines of the gravel closer to the verandah are perfectly straight, but on the other side of the paved stones the lines become freer, as they flow around the more natural moss garden beyond it. 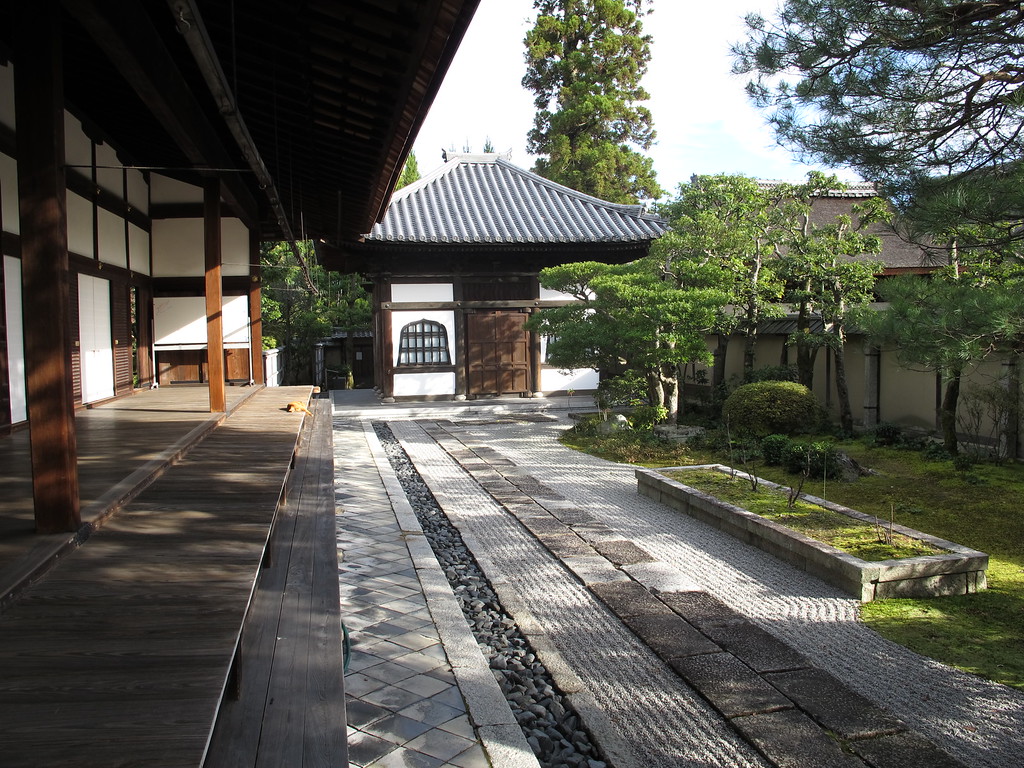 It is a nice spot to stop and relax, as the furry friend I made there readily agreed.

Beyond this garden is a shukubo, or lodging house which overlooks a more typical rock garden with rocks representing islands in a flowing river of sand. 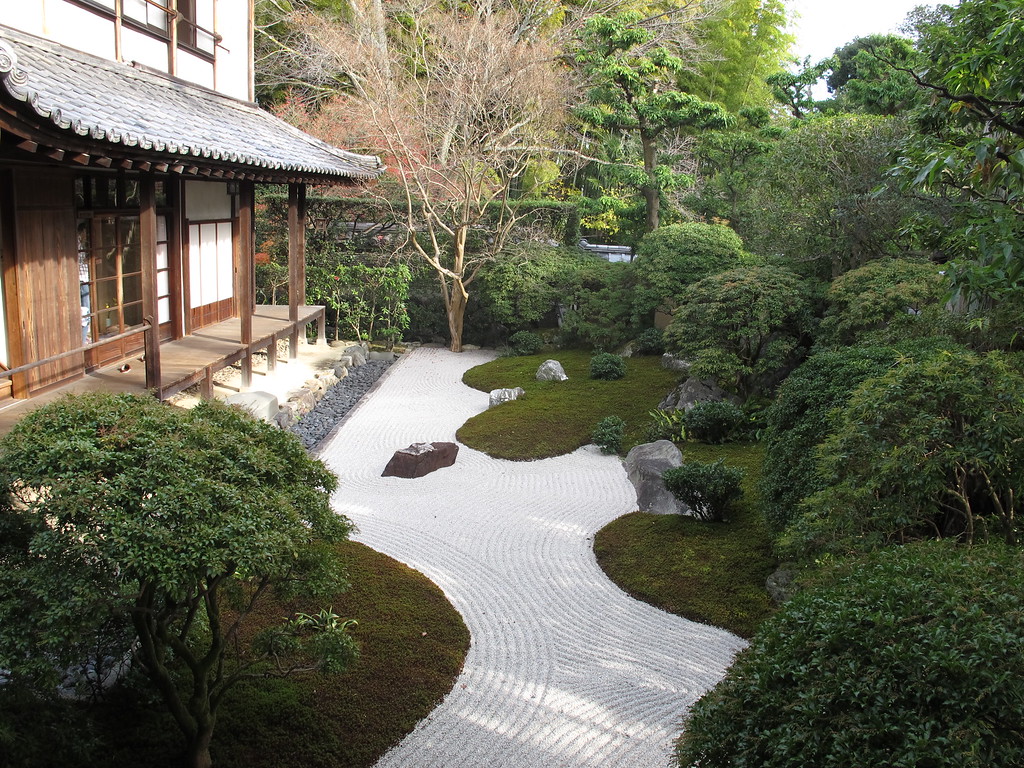 Keishun-in Temple was founded in 1558. It holds a series of gardens, starting with a very compact rock garden built around a well. 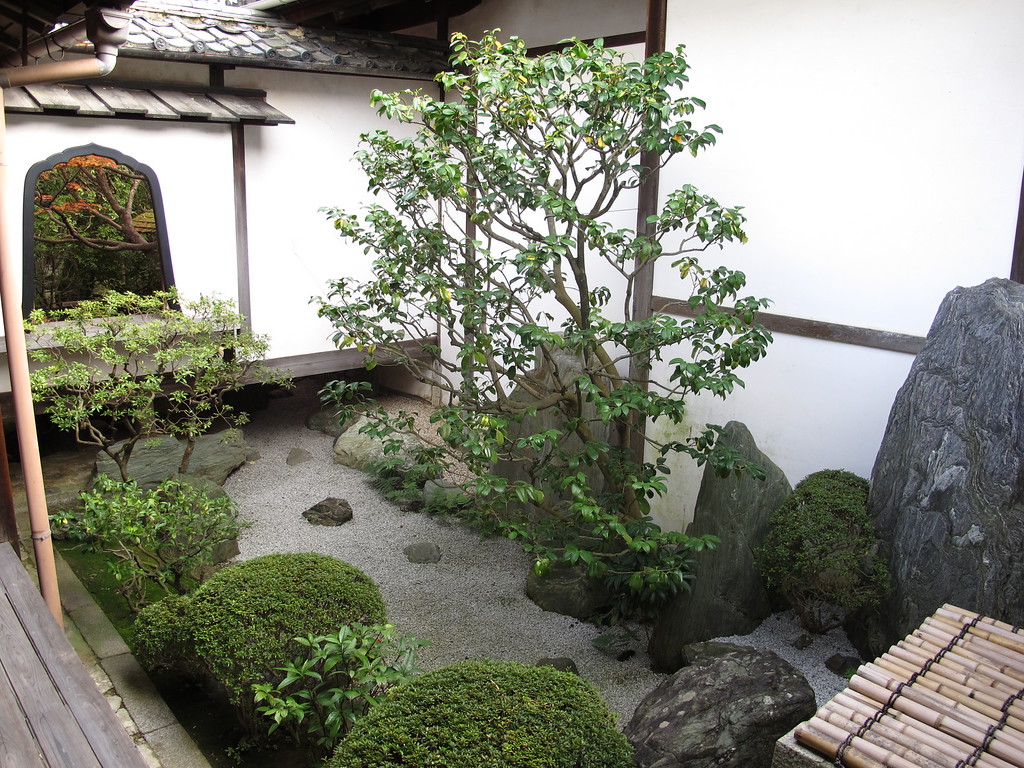 Beyond this is a tea room from where you can enjoy a greener garden that feels like a woodland sanctuary. 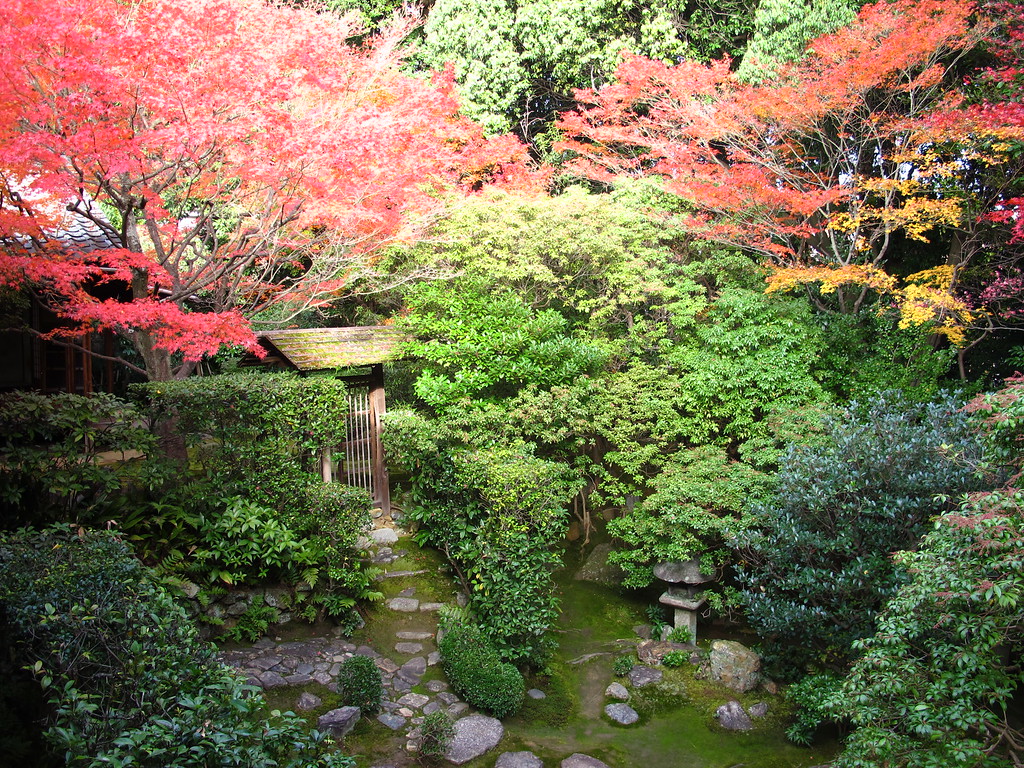 Beyond that again is the largest garden in front of the main hall. This has a large bank of perfectly trimmed rhododendrons that must make for an impressive sight in the spring. 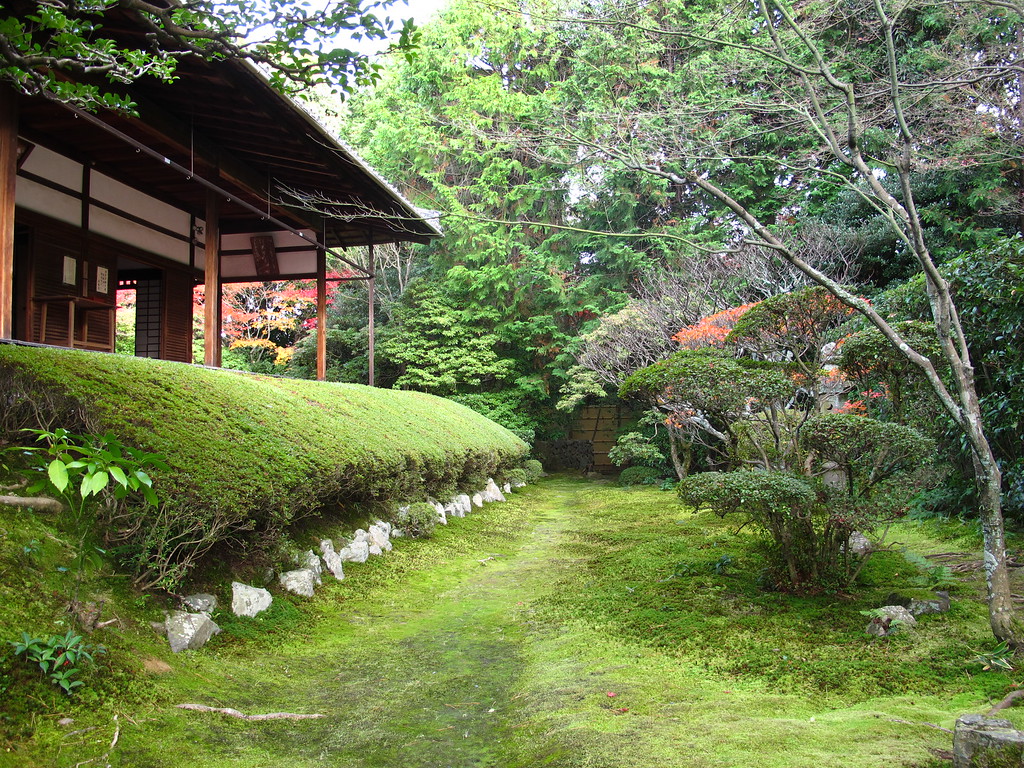 Though the majority of the 38 sub-temples at Myoshin-ji are not open to the public, it is still nice to wander the lanes between them and have a little peep in at the gates. You should remember though, that many of these temples are also family homes, as monks do have private lives too! If you see people going about their daily business within the gates of a sub-temple, please respect their privacy and refrain from staring or taking pictures. Here is a selection of some pretty entrance gardens that I saw when I visited Myoshin-ji. 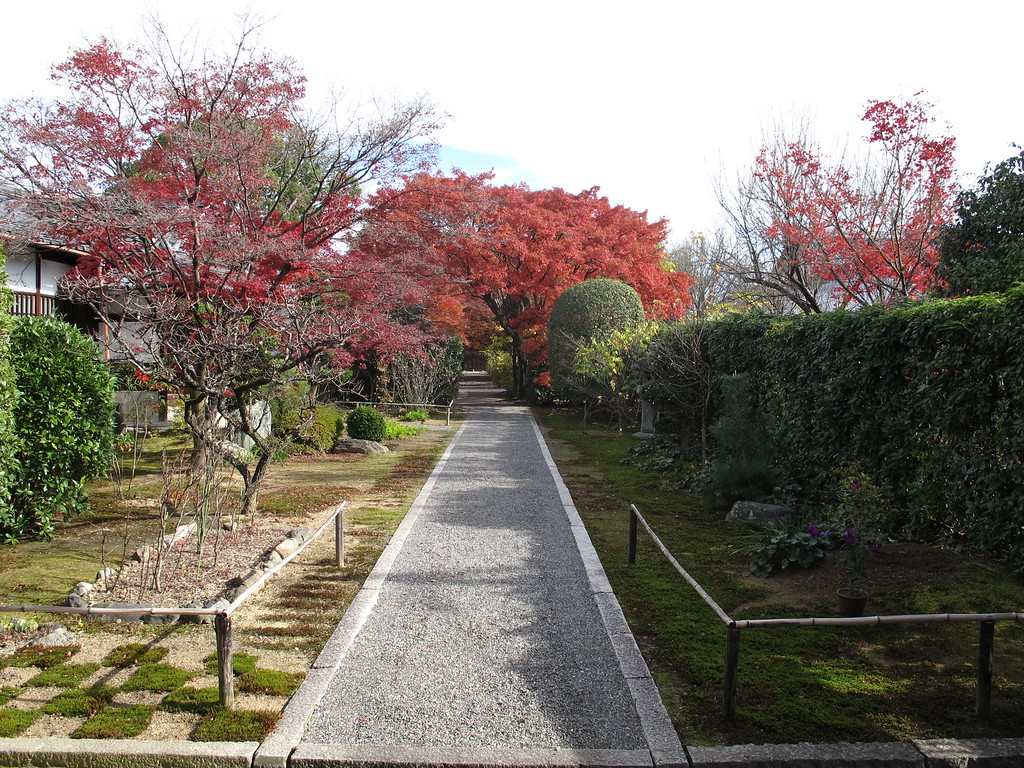 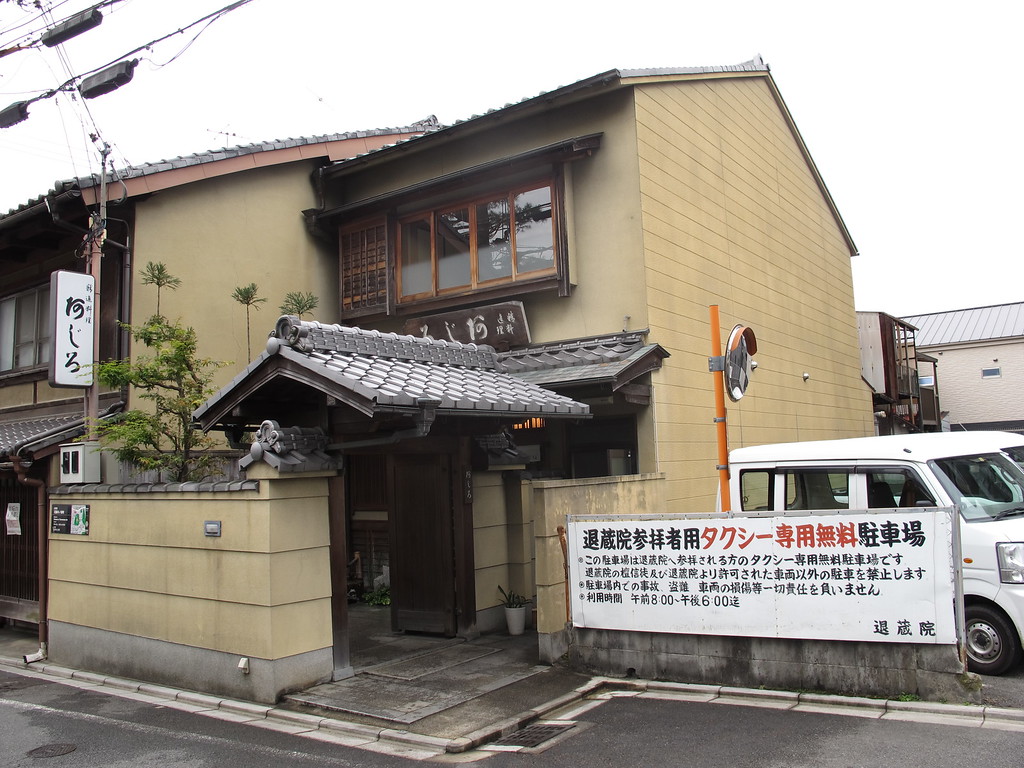 Not far from the southern exit of the Myoshin-ji temple complex is Ajirorestaurant. Here they serve “shojin-ryori”, Zen Buddhist vegetarian cuisine that is famous for its creative use of vegetables, mushrooms, tofu and rice. Thinking to complete my Zen experience at Myoshin-ji with such a meal, I strolled along to Ajiro, only to find that it was fully booked up. Obviously this is a popular restaurant because the lady I spoke to at the entrance told me that booking in advance is advisable on any day of the week. You should also be aware that shojin cuisine usually doesn’t come cheap and Ajiro is no exception. The cheapest option on the menu is the “bento” or boxed set that costs 3,000 yen.

Further along and across the road from Ajiro is the Hanazono Kaikan. This is Myoshin-ji Temple’s official lodging house, or “shukubo”, but to all intents and purposes it is really just a cheap hotel. Built of concrete, with comfortable rooms, a restaurant and a public bath, single rooms are reasonably priced at 6,500 yen a night. If this is a convenient location for you then you might consider staying here. However, for a more authentic shukubo experience, you might want to spend the night in one of the sub-temples like Shunko-in or Daishin-in. Waking up to a Zen temple garden and practicing zazen meditation in such surroundings must be a truly unforgettable experience. Shunko-in also has the added advantage of having English speaking staff.

For more information on staying at these locations please visit the following websites:

To stay at Daishin-in you must first make enquiries by telephone and speak in Japanese: 075-461-5714 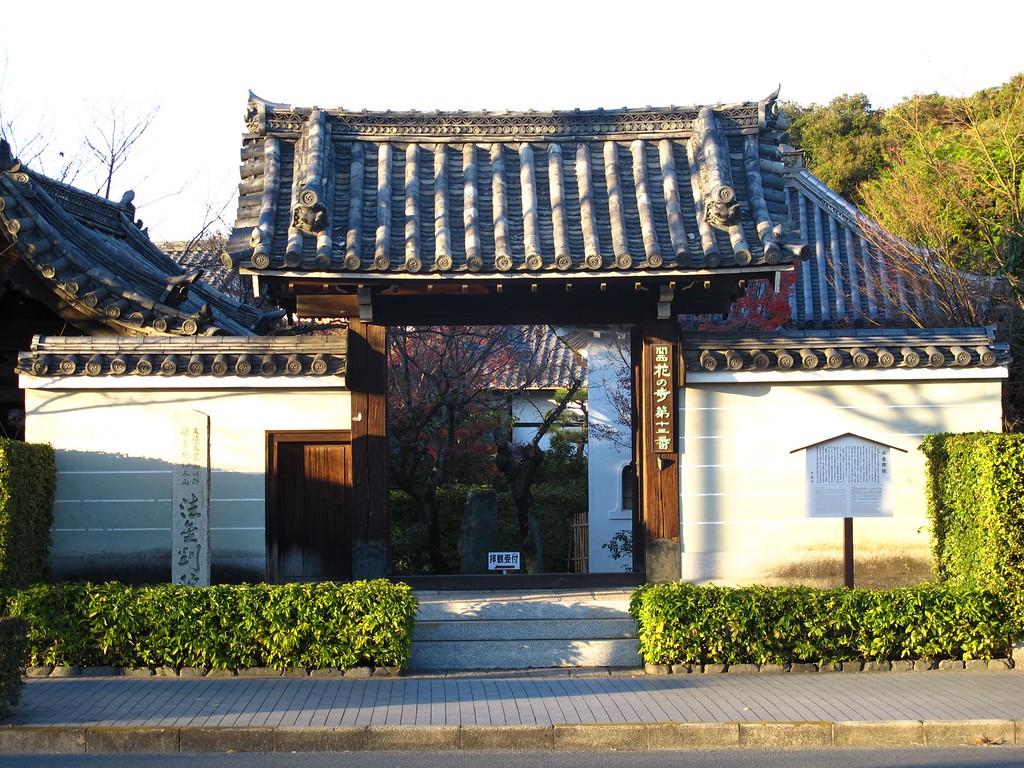 Heading back to Hanazono Station, I saw a sign for another temple, Hokongo-in and decided to drop in. Unlike Myoshin-ji, this is not a Zen temple, but a rare example of a Ritsu sect temple, with an equally rare Heian era garden dating back over a 1,000 years. Though I am no expert on Buddhist philosophies, the difference between the two Buddhist sects was quite evident when I saw the layout of the grounds at Honkongo-in. The Zen gardens of Myoshin-ji had concentrated landscapes of symbolic meaning into relatively small plots of land. The garden at Hokongo-in however, was much more open, expansive and completely given over to natural beauty rather than lessons in abstract thought. Personally I found this rather refreshing and the maple leaves reflected in the temple’s pond were very beautiful indeed. 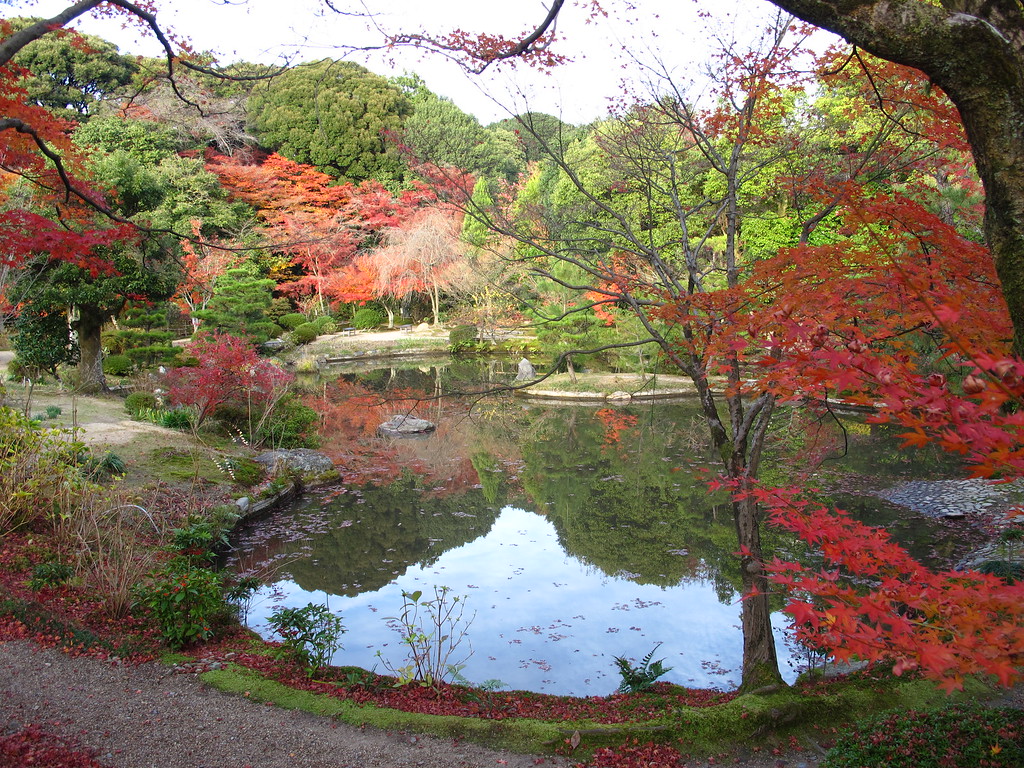 Behind the pond is a waterfall that also dates from the Heian period and is the oldest artificial waterfall in Japan. The prayer hall at the back of the temple contains several magnificent Buddhist statues which are also worth viewing. An English leaflet is provided that explains what each statue represents and the other key points of the temple, but for me the highlight was definitely the garden.

Take the JR Sagano Line from Kyoto Station and get off at Hanazono Station. The fare is 200 yen and the trip takes 10 minutes. From Hanazono Station, cross the street outside the station and turn right. Follow the signs to Myoshin-ji. It is a five minute walk from the station in a north-easterly direction and easy to find. To find out more, visit the official temple website.

Click a Kyoto District for detailed info on attractions, places to eat and accommodation