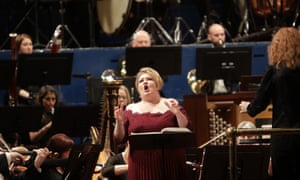 ‘One of our most instinctively expressive performers’: Karen Cargill as Judith in Bluebeard’s Castle at Leeds Town Hall. Photograph: Gary Calton/The Observer

Lasting barely one intense hour, Bluebeard’s Castle (1918) drills deep into that tight, dark space that is the human soul. There’s nothing stereotypical about Béla Bartók’s only opera. Its vocal line and rhythms are steeped in the language of his native Hungarian (which, with 14 vowels, has no easy equivalence when translated into English). It requires a huge orchestra, with a small army of additional brass, yet has only two characters and no chorus. Words to describe it typically occupy a dark palette: chilling, disturbing, terrifying, threatening, menacing. Opera North’s concert performance in Leeds town hall last weekend, conducted by Sian Edwards and sung in the original language, added another: compassionate.

This was thanks in part to a fierce, generous performance by the Scottish mezzo-soprano Karen Cargill, who wore the role of Judith as if it were her own skin, flayed by the revelations of her new husband as each of the seven doors opens to reveal its horrors. One of our most instinctively expressive performers, Cargill has so many colours and inflections in her voice that each short outburst carries a wealth of additional meaning.

Bartók’s work transforms a French fairytale, about a rich man who murders his wives, into a psychological exploration of intimacy, secrecy and memory. Here the women are alive, hidden in the recesses of his castle, which might also be his mind, or Judith’s. This is not a couple who chat. They speak obliquely, concisely. They pose questions but hardly answer them. You can see Judith as desperate, over-inquisitive. Cargill presented her as noble, questing after truth. She may not be the first to take this approach, but she’s one of the best. 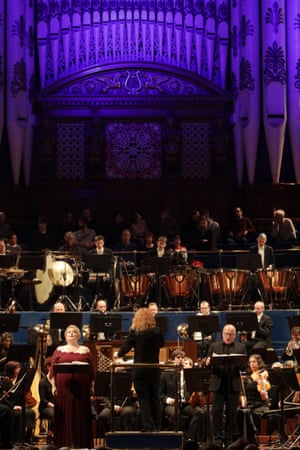 FacebookTwitterPinterest
Karen Cargill and Christopher Purves either side of Sian Edwards, who conducted the orchestra of Opera North in Bluebeard’s Castle at Leeds town hall. Photograph: Gary Calton/The Observer

In his role debut, the baritone Christopher Purves, always an exuberant actor particularly deft in comic roles, showed another side, performing with mesmeric, sober restraint. He and Cargill conveyed the entire drama through song, with merely an exchange of looks, a frown, an occasional turning away. Bartók hints at both intimacy and alienation in the nervy shifts between keys, related or distant, notably at the castle’s fifth door, when light floods in and Bluebeard’s dazzling kingdom is revealed. The orchestra lets rip, complete with organ, in a lush, radiant C major chord. The fine musicians of Opera North played their hearts out, from shadowy start to ominous end. It always seems impossible that Bartók could have dedicated the work to his wife (the marriage did not last).

Sign up for the Sleeve Notes email: music news, bold reviews and un...

Bartók’s fellow countrymen, the Budapest Festival Orchestra and its founder, Iván Fischer, were in residence at the Barbican for two nights with another Hungarian-born musician, the pianist András Schiff. He was soloist in Beethoven’s Fourth and Fifth piano concertos, part of a year-long celebration of the 250th anniversary of the composer’s birth. I heard the first concert. From the opening, solo notes of the piano, this was Beethoven as if heard for the first time. Schiff isn’t one for extravagant gesture, yet he makes the playing sound improvisatory, playful, inquisitive, bold, febrile.

The opening movement, taken at a broad pace, seemed to be in independent dialogue with the orchestra. Occasionally, Fischer looked round, not out of alarm, as is sometimes the case between conductor and soloist, but as if intrigued to know what Schiff, a musical companion of decades, might do next. The Budapest players were alert at all times, here and in the rest of the concert prepared to live dangerously. All-rounder musicians, they are as happy to put down their instruments and sing – a little rough around the edges but full of spirit. Dvořák’s Symphony No 7 in D minor had exactly the kind of rhythmic fire that showed the composer at his wildest. Dvořák a radical? He sounded it here.

FacebookTwitterPinterest
Watch a trailer for the Manchester Collective’s The Centre Is Every...

There was one other snatch of Hungarian music last week: some György Ligeti from the brilliant Manchester Collective, whose mainly northern tour included a London date in Peckham. This small, alternative ensemble wove Ligeti’s Métamorphoses nocturnes around Vivaldi’s Four Seasons (expert soloist/director Rakhi Singh), Richard Strauss and a bewitching piece for 12 string players by Edmund Finnis, The Centre Is Everywhere (2019). At a time when the centre seems nowhere, this was what we needed to hear.