Biography of the Day: William Boyce 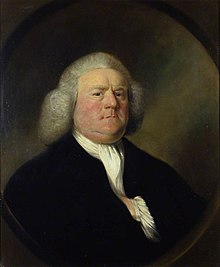 Born in London in Joiners Hall, then in Lower Thames Street, to John Boyce, at the time a joiner and cabinet-maker, and beadle of the Worshipful Company of Joiners and Ceilers, and his wife Elizabeth Cordwell, Boyce was baptised on 11 September 1711 and was admitted by his father as a choirboy at St Paul's Cathedral in 1719, before studying music with Maurice Greene after his voice broke in 1727.[1] (A house in the present choir school is named after him.)

His first professional appointment came in 1734 when he was employed as an organist at the Oxford Chapel in central London. He went on to take a number of similar posts before being appointed Master of the King's Musick in 1755 and becoming one of the organists at the Chapel Royal in 1758. One of his students was the prodigy Thomas Linley.

By the year 1758 his deafness had increased to such an extent that he was unable to continue in his organist posts. He resolved to give up teaching and to retire to Kensington, and devote himself to editing the collection of church music which bears his name. He retired and worked on completing the compilation Cathedral Music that his teacher Greene had left incomplete at his death. This led to Boyce editing works by the likes of William Byrd and Henry Purcell. Many of the pieces in the collection are still used in Anglican services today.

Boyce is known for his set of eight symphonies, his anthems and his odes. He also wrote the masque Peleus and Thetis and songs for John Dryden's Secular Masque, incidental music for William Shakespeare's The Tempest, Cymbeline, Romeo and Juliet and The Winter's Tale, and a quantity of chamber music including a set of twelve trio sonatas.[2] He also composed the British and Canadian Naval March "Heart of Oak". The lyrics were later written by David Garrick for his 1759 play Harlequin's Invasion.

Boyce was largely forgotten after his death and he remains a little-performed composer today, although a number of his pieces were rediscovered in the 1930s and Constant Lambert edited and sometimes conducted his works. Lambert had already launched the early stages of the modern Boyce revival in 1928, when he published the first modern edition of the Eight Symphonies (Bartlett and Bruce 2001). The great exception to this neglect was his church music, which was edited after his death by Philip Hayes and published in two large volumes, Fifteen Anthems by Dr Boyce in 1780 and A Collection of Anthems and a Short Service in 1790 (Bartlett 2003, 54). The first movement (Allegro) of Boyce's Symphony No. 1 in B-flat was the first piece of music played during the procession of the bride and bridegroom at the conclusion of the wedding of Prince Harry and Meghan Markle in 2018.[4]

Boyce's portraits were painted by Joshua Reynolds and Thomas Hudson. He was drawn and engraved by John Keyse Sherwin, and a vignette made by Drayton after Robert Smirke.[5]

On 7 February 1779 Boyce died from an attack of gout. He was buried under the dome of St Paul's Cathedral.[7]

Academy of St Martin in the Fields
Neville Marriner