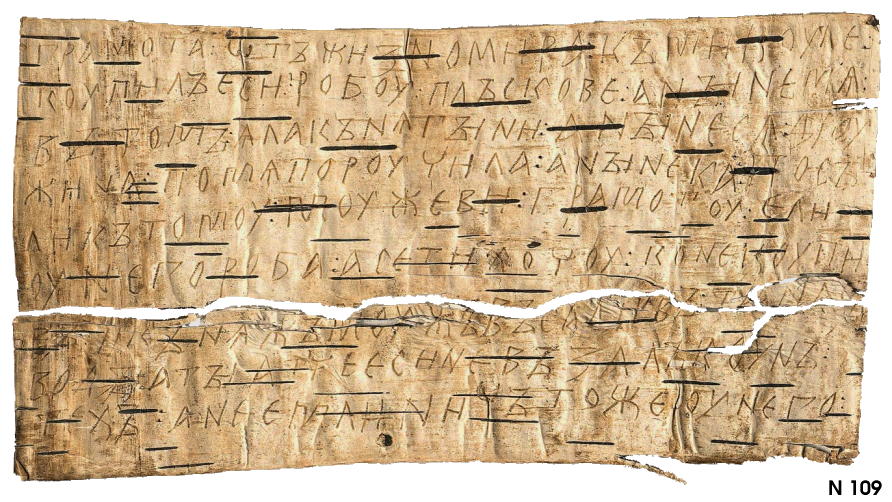 Given at the University of Kentucky on October 23, 2012

Everyday Communication on Birchbark in Medieval Russia from UK College of Arts & Sciences on Vimeo.

“b-Mail: Everyday Communication on Birch bark in Medieval Russia,” a presentation on how people communicated in the earliest Russian writing. Prior to its violent annexation by Moscow in 1478, the city of Great Novgorod in northwestern Russia was the seat of a vigorous “merchant republic,” partially democratic in its government. The merchants of Novgorod colonized a huge swath of northern Eurasia in their quest for furs and other commodities; they sold their goods in a trade network that ranged from Western Europe to Central Asia. Despite the distances they travelled, they maintained lines of quick communication by writing, and the materials that they used quite literally grew on trees. Over a thousand messages written on birchbark have been found in the moist earth of Novgorod—letters about everyday concerns, written by men, women, and children, nuns, priests, and laity, nobles and peasants.

Thanks to these letters have opened a remarkable window on the civilization of medieval Russia, including many details of economic transactions, legal procedures, folk rituals, and everyday life. Thanks to these texts, we can hear again the voices of a long-lost culture—the desperate words of an eleventh-century lady (perhaps a nun) writing to her unattentive lover; prisoners pleading to be bailed out of jail; wine-merchants ensuring that their stock is not drunk up by the delivery men; an official investigating a drunken brawl; creditors sending bills of sale or stern warnings about overdue payments; matchmakers making deals with the mothers of brides-to-be; and even a small boy scrawling notes to a classmate and drawing heroic pictures of himself when he is supposed to be studying. Close examination of the birchbark letters can also reveal the hidden mechanics of the communication process—how the messages were composed, transmitted, and delivered, and how the spoken word continued to play an important role even in written transactions.