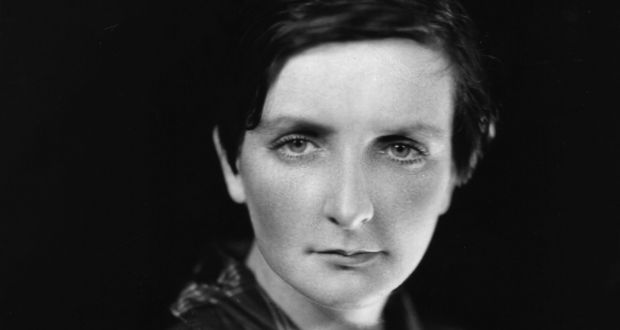 Kate O’Brien suffered due to both popularlity and censorship: Photograph: Sasha/Getty Images

It may come as a surprise to many that this volume offers readers the first systematic overview of the achievements of women writers in Ireland. The contributors to A History of Modern Irish Women’s Literature are for the first time charting the work of Irish women writers from the 17th century to the present day, a collective endeavour that will enable readers and researchers of Irish literature to discover, understand and further explore the ways in which women in Ireland have engaged in creative literary expression and sought to influence the world around them through their writing.

All genres of women’s writing are covered, including drama, poetry, the short story, fiction from Northern Ireland, children’s fiction, writing in the Irish language, life-writing and writing from the diaspora, and each chapter is written by a specialist in the area. We are grateful to Ray Ryan and Cambridge University Press for encouraging the project from the outset.

The publication in 2018 of a history of women’s writing in Ireland could reasonably be described as overdue, but the volume’s appearance some three decades after the first flowering of international feminist literary scholarship has enabled both editors and contributors to take advantage of a number of developments that have reshaped not only the way we think about women’s writing, but about Irish literature and literature more generally. These developments have helped to bring forgotten women writers into view and to understand the political, literary and social structures that led to the marginalisation of so much of their work.

The decision to devote three chapters to some of the best-known women writers of the 20th century (Kate O’Brien, Elizabeth Bowen and Edna O’Brien) was taken not only to highlight these writers’ significant achievements, but also because it offers the opportunity to examine in detail some of the processes of exclusion that have operated within the Irish literary establishment, even when it comes to what are by any measure extraordinary literary careers.

The reputations of these writers suffered through censorship (both O’Briens), dismissal on the grounds of being insufficiently Irish (Bowen) or too “Irish” (Edna O’Brien), too popular (both O’Briens) or not popular enough (Bowen). In all cases, what can be observed is the tendency (noted by women writers as early as the 17th century) to foreground a woman writer’s gender and to assess her work in terms of how society expects women to behave.

The burden of being assessed in gendered rather than literary terms became one of the defining themes of later 20th-century Irish women’s writing, encapsulated most strikingly in the essays of Eavan Boland. The volume resonates with the reanimation of feminist organising and activism in recent years, notably in the context of the staging of plays by women critiquing political and institutional violence and in the personal testimony and life-writing that form an important part of the feminist movement in Ireland with its insight into women’s experiences of sexual abuse, poverty, racism and incarceration in State-run orphanages and Magdalene laundries.

The developments of the 20th and 21st centuries are, however, part of a much longer historical narrative. The broad chronological sweep allowed us to demonstrate how Irish women’s writing evolved against an ever-changing political context, thus unsettling the nation-oriented focus that dominated views of literature in the Revival period and the early to mid 20th century. Several chapters attest to the commitment of women to patriotic and nationalist movements, and to the impetus these movements gave to writing by women such as Charlotte Brooke, Jane Elgee (“Speranza”) and Augusta Gregory, as well as to Irish-language women writers, but historically, the privileging of the national resulted in the construction of a “literary tradition” that could not encompass voices that either challenged the national narrative, or whose primary focus, as in the case of poet and activist Eva Gore-Booth, simply lay elsewhere. 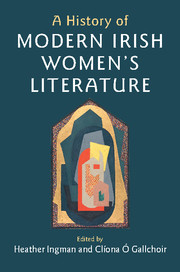 Internationally, the exclusion of women’s writing from literary and academic canons was usually justified on aesthetic grounds, with excellence determined through a highly selective focus on a small number of male writers. In this volume, we use an expansive definition of the term “literature”, and our contributors turn their attention to many non-mainstream literary forms such as official documents, letters, devotional poetry, ballads, and autobiographical narratives, as well as journalism, children’s literature and genre fiction. A consideration of unpublished writing and oral works is essential to a feminist literary history in Ireland where women, particularly in earlier periods, encountered significant obstacles to publication, and where the Gaelic literary tradition remained vigorous in terms of oral composition and transmission, even as its formal literary institutions weakened in the 17th and 18th centuries.

This inclusive approach uncovers significant numbers of women who were active in more than one type of writing: in the 18th century, Elizabeth Griffith wrote and published novels, plays, essays, letters and tales for young readers and in the early 20th century Úna Ní Fhaircheallaigh (Agnes Farrelly) published one of the first novels in modern Irish as well as travel writing, essays and academic works. Emphasis is placed on women’s literary networks such as the Irish Women Writers’ Club which, for 25 years, provided women writers with support at a time when Irish literary culture was dominated by male writers, editors and journalists. This results in a richer and arguably more accurate picture of a network of writers, texts and institutions as the context in which literature is produced, and offers an important corrective to the idea of the solitary creative genius, so often gendered as male.

The idea of the canon of Irish literature is also challenged in this volume by inclusion of many writers who cross national boundaries. Whereas male exiles such as Joyce and Beckett have been accommodated into the Irish canon, the same cannot be said for George Egerton and Katherine Cecil Thurston, literary pioneers of the New Woman movement, or for the many novelists of the mid to late 19th century such as Charlotte Riddell, who lived and published in London. These writers have until recently simply vanished from the map of Irish literature. In addition to literary migrants, this outline of writing by Irish women extends boundaries by including transnational and diasporic communities, which produced acclaimed writers such as Maeve Brennan and Mary McCarthy, but also writing not usually considered within the frame of the literary, expressive of the experience of migration and membership of emigrant Irish communities – an experience that hitherto has been seen almost exclusively from a male perspective.

The story of Irish literature has traditionally been largely male, with the occasional inclusion of a select few women authors. The publication of this volume complicates and enriches our understanding of the Irish canon by retrieving forgotten writers, placing well-known authors in new contexts and allowing readers to trace patterns and developments in women’s writing across periods and languages. We hope that it will encourage readers and researchers to explore further the wealth of material that has been written by women in Ireland.